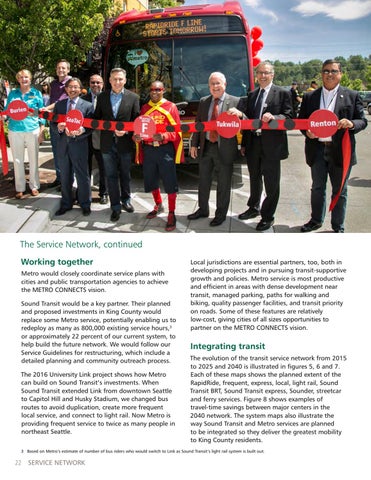 The Service Network, continued Working together Metro would closely coordinate service plans with cities and public transportation agencies to achieve the METRO CONNECTS vision. Sound Transit would be a key partner. Their planned and proposed investments in King County would replace some Metro service, potentially enabling us to redeploy as many as 800,000 existing service hours,3 or approximately 22 percent of our current system, to help build the future network. We would follow our Service Guidelines for restructuring, which include a detailed planning and community outreach process. The 2016 University Link project shows how Metro can build on Sound Transit’s investments. When Sound Transit extended Link from downtown Seattle to Capitol Hill and Husky Stadium, we changed bus routes to avoid duplication, create more frequent local service, and connect to light rail. Now Metro is providing frequent service to twice as many people in northeast Seattle.

Local jurisdictions are essential partners, too, both in developing projects and in pursuing transit-supportive growth and policies. Metro service is most productive and efficient in areas with dense development near transit, managed parking, paths for walking and biking, quality passenger facilities, and transit priority on roads. Some of these features are relatively low-cost, giving cities of all sizes opportunities to partner on the METRO CONNECTS vision.

Integrating transit The evolution of the transit service network from 2015 to 2025 and 2040 is illustrated in figures 5, 6 and 7. Each of these maps shows the planned extent of the RapidRide, frequent, express, local, light rail, Sound Transit BRT, Sound Transit express, Sounder, streetcar and ferry services. Figure 8 shows examples of travel-time savings between major centers in the 2040 network. The system maps also illustrate the way Sound Transit and Metro services are planned to be integrated so they deliver the greatest mobility to King County residents.

3 Based on Metro’s estimate of number of bus riders who would switch to Link as Sound Transit’s light rail system is built out.