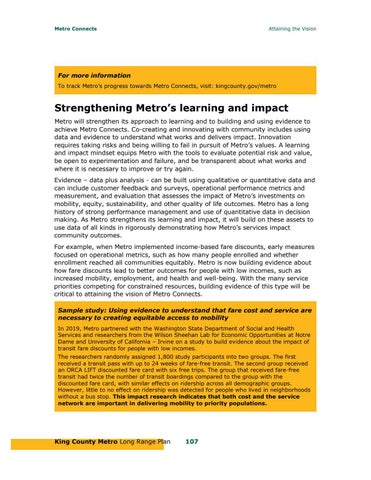 Strengthening Metro’s learning and impact Metro will strengthen its approach to learning and to building and using evidence to achieve Metro Connects. Co-creating and innovating with community includes using data and evidence to understand what works and delivers impact. Innovation requires taking risks and being willing to fail in pursuit of Metro’s values. A learning and impact mindset equips Metro with the tools to evaluate potential risk and value, be open to experimentation and failure, and be transparent about what works and where it is necessary to improve or try again. Evidence – data plus analysis - can be built using qualitative or quantitative data and can include customer feedback and surveys, operational performance metrics and measurement, and evaluation that assesses the impact of Metro’s investments on mobility, equity, sustainability, and other quality of life outcomes. Metro has a long history of strong performance management and use of quantitative data in decision making. As Metro strengthens its learning and impact, it will build on these assets to use data of all kinds in rigorously demonstrating how Metro’s services impact community outcomes. For example, when Metro implemented income-based fare discounts, early measures focused on operational metrics, such as how many people enrolled and whether enrollment reached all communities equitably. Metro is now building evidence about how fare discounts lead to better outcomes for people with low incomes, such as increased mobility, employment, and health and well-being. With the many service priorities competing for constrained resources, building evidence of this type will be critical to attaining the vision of Metro Connects. Sample study: Using evidence to understand that fare cost and service are necessary to creating equitable access to mobility In 2019, Metro partnered with the Washington State Department of Social and Health Services and researchers from the Wilson Sheehan Lab for Economic Opportunities at Notre Dame and University of California – Irvine on a study to build evidence about the impact of transit fare discounts for people with low incomes. The researchers randomly assigned 1,800 study participants into two groups. The first received a transit pass with up to 24 weeks of fare-free transit. The second group received an ORCA LIFT discounted fare card with six free trips. The group that received fare-free transit had twice the number of transit boardings compared to the group with the discounted fare card, with similar effects on ridership across all demographic groups. However, little to no effect on ridership was detected for people who lived in neighborhoods without a bus stop. This impact research indicates that both cost and the service network are important in delivering mobility to priority populations. 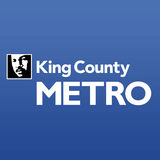