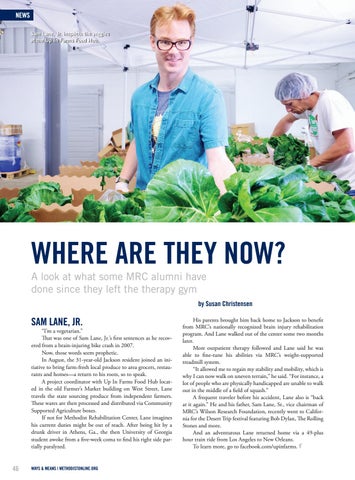 NEWS Sam Lane, Jr. inspects the veggies at the Up In Farms Food Hub.

WHERE ARE THEY NOW? A look at what some MRC alumni have done since they left the therapy gym

“I’m a vegetarian.” That was one of Sam Lane, Jr.’s first sentences as he recovered from a brain-injuring bike crash in 2007. Now, those words seem prophetic. In August, the 31-year-old Jackson resident joined an initiative to bring farm-fresh local produce to area grocers, restaurants and homes—a return to his roots, so to speak. A project coordinator with Up In Farms Food Hub located in the old Farmer’s Market building on West Street, Lane travels the state sourcing produce from independent farmers. These wares are then processed and distributed via Community Supported Agriculture boxes. If not for Methodist Rehabilitation Center, Lane imagines his current duties might be out of reach. After being hit by a drunk driver in Athens, Ga., the then University of Georgia student awoke from a five-week coma to find his right side partially paralyzed.

His parents brought him back home to Jackson to benefit from MRC’s nationally recognized brain injury rehabilitation program. And Lane walked out of the center some two months later. More outpatient therapy followed and Lane said he was able to fine-tune his abilities via MRC’s weight-supported treadmill system. “It allowed me to regain my stability and mobility, which is why I can now walk on uneven terrain,” he said. “For instance, a lot of people who are physically handicapped are unable to walk out in the middle of a field of squash.” A frequent traveler before his accident, Lane also is “back at it again.” He and his father, Sam Lane, Sr., vice chairman of MRC’s Wilson Research Foundation, recently went to California for the Desert Trip festival featuring Bob Dylan, The Rolling Stones and more. And an adventurous Lane returned home via a 49-plus hour train ride from Los Angeles to New Orleans. To learn more, go to facebook.com/upinfarms.