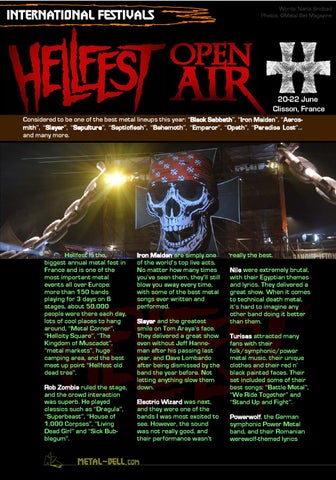 Hellfest is the biggest annual metal fest in France and is one of the most important metal events all over Europe: more than 150 bands playing for 3 days on 6 stages, about 50,000 people were there each day, lots of cool places to hang around, “Metal Corner”, “Hellcity Square”, “The Kingdom of Muscadet”, “metal markets”, huge camping area, and the best meet up point “Hellfest old dead tree”. Rob Zombie ruled the stage, and the crowd interaction was superb. He played classics such as “Dragula”, “Superbeast”, “House of 1,000 Corpses”, “Living Dead Girl” and “Sick Bubblegum”.

Iron Maiden are simply one of the world’s top live acts. No matter how many times you’ve seen them, they’ll still blow you away every time, with some of the best metal songs ever written and performed. Slayer and the greatest smile on Tom Araya’s face. They delivered a great show even without Jeff Hanneman after his passing last year, and Dave Lombardo after being dismissed by the band the year before. Not letting anything slow them down. Electric Wizard was next, and they were one of the bands I was most excited to see. However, the sound was not really good, and their performance wasn’t

really the best. Nile were extremely brutal, with their Egyptian themes and lyrics. They delivered a great show. When it comes to technical death metal, it’s hard to imagine any other band doing it better than them. Turisas attracted many fans with their folk/symphonic/power metal music, their unique clothes and their red n’ black painted faces. Their set included some of their best songs: “Battle Metal”, “We Ride Together” and “Stand Up and Fight”. Powerwolf the German Powerwolf, symphonic Power Metal band, and their Romanian werewolf-themed lyrics 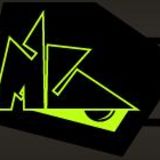