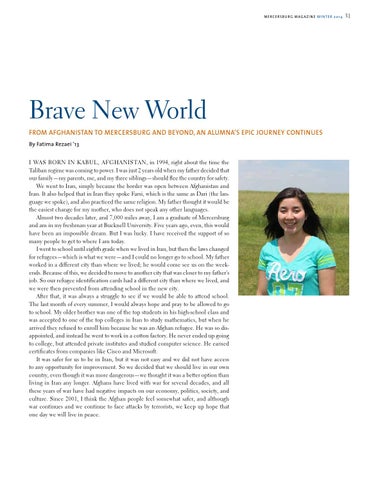 Brave New World From Afghanistan to Mercersburg and beyond, an alumna’s epic journey continues By Fatima Rezaei ’13 I was born in Kabul, Afghanistan, in 1994, right about the time the Taliban regime was coming to power. I was just 2 years old when my father decided that our family—my parents, me, and my three siblings—should flee the country for safety. We went to Iran, simply because the border was open between Afghanistan and Iran. It also helped that in Iran they spoke Farsi, which is the same as Dari (the language we spoke), and also practiced the same religion. My father thought it would be the easiest change for my mother, who does not speak any other languages. Almost two decades later, and 7,000 miles away, I am a graduate of Mercersburg and am in my freshman year at Bucknell University. Five years ago, even, this would have been an impossible dream. But I was lucky. I have received the support of so many people to get to where I am today. I went to school until eighth grade when we lived in Iran, but then the laws changed for refugees—which is what we were—and I could no longer go to school. My father worked in a different city than where we lived; he would come see us on the weekends. Because of this, we decided to move to another city that was closer to my father’s job. So our refugee identification cards had a different city than where we lived, and we were then prevented from attending school in the new city. After that, it was always a struggle to see if we would be able to attend school. The last month of every summer, I would always hope and pray to be allowed to go to school. My older brother was one of the top students in his high-school class and was accepted to one of the top colleges in Iran to study mathematics, but when he arrived they refused to enroll him because he was an Afghan refugee. He was so disappointed, and instead he went to work in a cotton factory. He never ended up going to college, but attended private institutes and studied computer science. He earned certificates from companies like Cisco and Microsoft. It was safer for us to be in Iran, but it was not easy and we did not have access to any opportunity for improvement. So we decided that we should live in our own country, even though it was more dangerous—we thought it was a better option than living in Iran any longer. Afghans have lived with war for several decades, and all these years of war have had negative impacts on our economy, politics, society, and culture. Since 2001, I think the Afghan people feel somewhat safer, and although war continues and we continue to face attacks by terrorists, we keep up hope that one day we will live in peace. 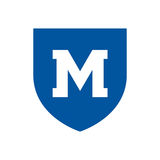