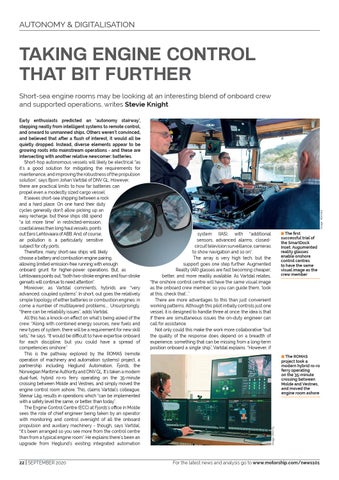 8 The first successful trial of the SmartDock Inset: Augumented reality glasses enable onshore control centres to have the same visual image as the crew member

system (IAS), with “additional sensors, advanced alarms, closedcircuit television surveillance, cameras to show navigation and so on”. The array is very high tech, but the support goes one step further. Augmented Reality (AR) glasses are fast becoming cheaper, better, and more readily available. As Vartdal relates, “the onshore control centre will have the same visual image as the onboard crew member, so you can guide them, ‘look at this, check that’...” There are more advantages to this than just convenient working patterns. Although this pilot initially controls just one vessel, it is designed to handle three at once: the idea is that if there are simultaneous issues the on-duty engineer can call for assistance. Not only could this make the work more collaborative “but the quality of the response does depend on a breadth of experience, something that can be missing from a long-term position onboard a single ship”, Vartdal explains. “However, if

8 The ROMAS project took a modern hybrid ro-ro ferry operating on the 35-minute crossing between Molde and Vestnes, and moved the engine room ashore

Early enthusiasts predicted an ‘autonomy stairway’, stepping neatly from intelligent systems to remote control, and onward to unmanned ships. Others weren’t convinced, and believed that after a flush of interest, it would all be quietly dropped. Instead, diverse elements appear to be growing roots into mainstream operations - and these are intersecting with another relative newcomer: batteries. Short-hop autonomous vessels will likely be electrical “as it’s a good solution for mitigating the requirements for maintenance, and improving the robustness of the propulsion solution”, says Bjorn Johan Vartdal of DNV GL. However, there are practical limits to how far batteries can propel even a modestly sized cargo vessel. It leaves short-sea shipping between a rock and a hard place. On one hand their duty cycles generally don’t allow picking up an easy recharge, but these ships still spend “a lot more time” in restricted-emission, coastal areas than long haul vessels, points out Eero Lehtovaara of ABB. And, of course, air pollution is a particularly sensitive subject for city ports. Therefore, many short-sea ships will likely choose a battery and combustion engine pairing, allowing limited emission-free running with enough onboard grunt for higher-power operations. But, as Lehtovaara points out, “both two-stroke engines and four-stroke gensets will continue to need attention”. Moreover, as Vartdal comments, hybrids are “very advanced, coupled systems”. In short, out goes the relatively simple topology of either batteries or combustion engines: in come a number of multilayered problems.... Unsurprisingly, “there can be reliability issues”, adds Vartdal. All this has a knock-on eﬀect on what’s being asked of the crew. “Along with combined energy sources, new fuels and new types of system, there will be a requirement for new skill sets,” he says. “It would be diﬃcult to have expertise onboard for each discipline, but you could have a spread of competencies onshore.” This is the pathway explored by the ROMAS (remote operation of machinery and automation systems) project, a partnership including Høglund Automation, Fjord1, the Norwegian Maritime Authority and DNV GL. It’s taken a modern dual-fuel, hybrid ro-ro ferry operating on the 35-minute crossing between Molde and Vestnes, and simply moved the engine control room ashore. This, claims Vartdal’s colleague, Steinar Låg, results in operations which “can be implemented with a safety level the same, or better, than today”. The Engine Control Centre (ECC) at Fjord1’s oﬃce in Molde sees the role of chief engineer being taken by an operator with monitoring and control oversight of all the onboard propulsion and auxiliary machinery - though, says Vartdal, “it’s been arranged so you see more from the control centre than from a typical engine room”. He explains there’s been an upgrade from Høglund’s existing integrated automation

Short-sea engine rooms may be looking at an interesting blend of onboard crew and supported operations, writes Stevie Knight

For the latest news and analysis go to www.motorship.com/news101 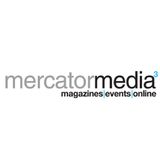