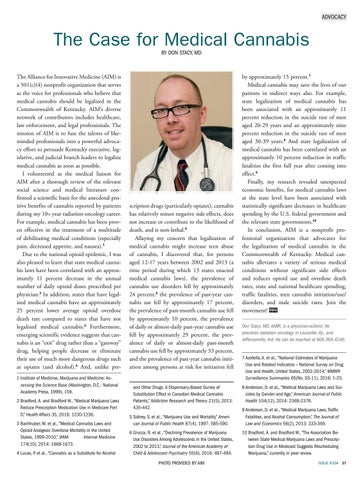 The Case for Medical Cannabis BY DON STACY, MD

The Alliance for Innovative Medicine (AIM) is a 501(c)(4) nonprofit organization that serves as the voice for professionals who believe that medical cannabis should be legalized in the Commonwealth of Kentucky. AIM’s diverse network of contributors includes healthcare, law enforcement, and legal professionals. The mission of AIM is to fuse the talents of likeminded professionals into a powerful advocacy effort to persuade Kentucky executive, legislative, and judicial branch leaders to legalize medical cannabis as soon as possible. I volunteered as the medical liaison for AIM after a thorough review of the relevant social science and medical literature confirmed a scientific basis for the anecdotal positive benefits of cannabis reported by patients during my 10+ year radiation oncology career. For example, medical cannabis has been proven effective in the treatment of a multitude of debilitating medical conditions (especially pain, decreased appetite, and nausea).1 Due to the national opioid epidemic, I was also pleased to learn that state medical cannabis laws have been correlated with an approximately 11 percent decrease in the annual number of daily opioid doses prescribed per physician.2 In addition, states that have legalized medical cannabis have an approximately 25 percent lower average opioid overdose death rate compared to states that have not legalized medical cannabis.3 Furthermore, emerging scientific evidence suggests that cannabis is an “exit” drug rather than a “gateway” drug, helping people decrease or eliminate their use of much more dangerous drugs such as opiates (and alcohol).4 And, unlike pre1 Institute of Medicine, Marijuana and Medicine: Assessing the Science Base (Washington, D.C.: National Academy Press, 1999), 159. 2 Bradford, A. and Bradford W., “Medical Marijuana Laws Reduce Prescription Medication Use in Medicare Part D,” Health Affairs 35, 2016: 1230-1236. 3 Bachhuber, M. et al., “Medical Cannabis Laws and Opioid Analgesic Overdose Mortality in the United States, 1999-2010,” JAMA Internal Medicine 174(10), 2014: 1668-1673. 4 Lucas, P. et al., “Cannabis as a Substitute for Alcohol

10 Bradford, A. and Bradford W., “The Association Between State Medical Marijuana Laws and Prescription Drug Use in Medicaid Suggests Rescheduling Marijuana,” currently in peer review.