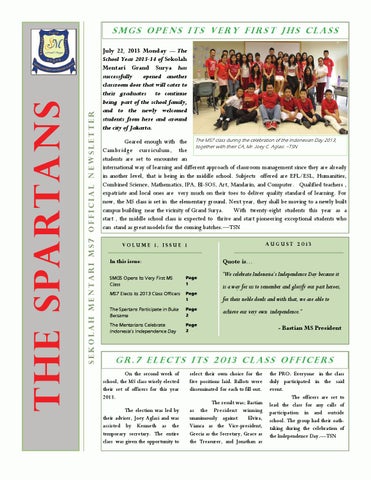 S M G S o p e n s i t s v e ry f i r s t J H s c l a s s July 22, 2013 Monday — The School Year 2013-14 of Sekolah Mentari Grand Surya has successfully opened another classroom door that will cater to their graduates to continue being part of the school family, and to the newly welcomed students from here and around the city of Jakarta. Geared enough with the The MS7 class during the celebration of the Indonesian Day 2013, together with their CA, Mr. Joey C. Aglasi. –TSN Cambridge curriculum, the students are set to encounter an international way of learning and different approach of classroom management since they are already in another level, that is being in the middle school. Subjects offered are EFL/ESL, Humanities, Combined Science, Mathematics, IPA, BI-SOS, Art, Mandarin, and Computer. Qualified teachers , expatriate and local ones are very much on their toes to deliver quality standard of learning. For now, the MS class is set in the elementary ground. Next year, they shall be moving to a newly built campus building near the vicinity of Grand Surya. With twenty-eight students this year as a start , the middle school class is expected to thrive and start pioneering exceptional students who can stand as great models for the coming batches.—TSN August 2013

“We celebrate Indonesia’s Independence Day because it

for their noble deeds and with that, we are able to

The Spartans Participate in Buka Bersama

achieve our very own independence.”

is a way for us to remember and glorify our past heroes,

GR.7 Elects its 2013 class officers On the second week of school, the MS class wisely elected their set of officers for this year 2013. The election was led by their adviser, Joey Aglasi and was assisted by Kenneth as the temporary secretary. The entire class was given the opportunity to

select their own choice for the five positions laid. Ballots were disseminated for each to fill out. The result was; Bastian as the President winning unanimously against Elvira, Vianca as the Vice-president, Grecia as the Secretary, Grace as the Treasurer, and Jonathan as

the PRO. Everyone in the class duly participated in the said event. The officers are set to lead the class for any calls of participation in and outside school. The group had their oathtaking during the celebration of the Independence Day.—TSN

The mentarians participate in buka bersama

Thursday, August 1, 2013 SMGS — Countless bags of food were generously distributed to h u n d r e d s o f disadvantaged families living near school and some from not-so-far areas. With the wholehearted cooperation of the school and parents, together with the students and teachers, the distribution ended up as it was expected. Parents donated some amount for the purchase of the goods, and students paved their

Despite the unwanted high temperature before noon time, the MS7 class lent their hands in distributing goods and in shaking hands to those receivers.-TSN

way to hand in the goods personally to the receivers, mostly women and children. The black bags were filled with kilos of rice and sugar, liters of cooking oil and syrups, and packs of biscuits.

Last year, about 600 families received sembako bags from the school as a gesture of help and unity amongst the community members. Definitely, this will be considered as an annual tradition of the school.—TSN

Smgs celebrates independence day Monday, August 26, 3013.— All geared in red and white attires, the Mentarians led their feet to the open court for the post celebration of Indonesia’s Independence Day. The celebration started at 8 o’clock in the morning, initiated by the raising of the flag led by grade 5 students. Dressed up mostly in full white, Chievas and a few chosen classmates executed a juvenile but descent code of marching. Right after was a short ceremony of oath-taking for the class officers in every level, which was led by Bastian of middle school 7. Miss Vilma Austria, the School Principal observes as Bastian of MS7 leads the oath-taking of Class Officers. Pak Hari the Bahasa Coordinator takes part in the said ceremony..—TSN

To make the entire school get drowned with fun, games followed as enjoyed by most like Tarik Tambang, Makan

Kerupuk,Lomba Kelereng, Masukan Pensil ke Dalam Botol, and Joget Balon. Games were played separately between the prep-level and elementary-MS level. Some teachers also took part in some games, playing Tarik Tambang despite the strong heat of the sun. Some parents were also able to visit and witness the fun and games enjoyed by all. The afternoon after everyone’s filling lunch was enjoyed much by watching movies in a few respective rooms. Flicks shown were all Indonesian classic films of different genres. The day ended at dismissal time with most wearing joyous smiles and dainty faces, looking forward to another celebration to come next year.—TSN