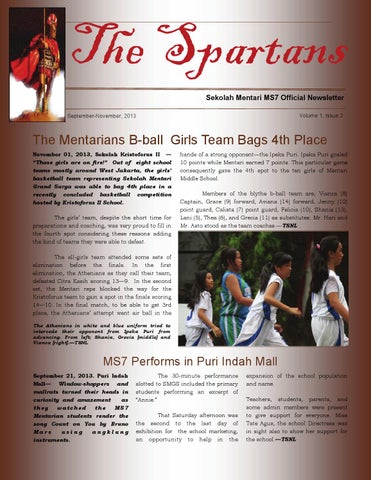 The Mentarians B-ball Girls Team Bags 4th Place November 01, 2013, Sekolah Kristoforus II — “Those girls are on fire!” Out of eight school teams mostly around West Jakarta, the girls’ basketball team representing Sekolah Mentari Grand Surya was able to bag 4th place in a recently concluded basketball competition hosted by Kristoforus II School. The girls’ team, despite the short time for preparations and coaching, was very proud to fill in the fourth spot considering these reasons adding the kind of teams they were able to defeat. The all-girls team attended some sets of elimination before the finals. In the first elimination, the Athenians as they call their team, defeated Citra Kasih scoring 13—9. In the second set, the Mentari reps blocked the way for the Kristoforus team to gain a spot in the finals scoring 14—10. In the final match, to be able to get 3rd place, the Athenians’ attempt went air ball in the

The Athenians in white and blue uniform tried to intercede their opponent from Ipeka Puri from advancing. From left; Shania, Grecia [middle] and Vianca [right].—TSNL

MS7 Performs in Puri Indah Mall September 21, 2013. Puri Indah Mall— Window-shoppers and mallrats turned their heads in curiosity and amazement as they watched the MS7 Mentarian students render the song Count on You by Bruno Mars using angklung instruments.

The 30-minute performance slotted to SMGS included the primary students performing an excerpt of “Annie.” That Saturday afternoon was the second to the last day of exhibition for the school marketing, an opportunity to help in the

expansion of the school population and name. Teachers, students, parents, and some admin members were present to give support for everyone. Miss Tate Agus, the school Directress was in sight also to show her support for the school.—TSNL

Playing my violin with squeaky sounds, Hearing notes in a nutty tune, Turning off the wreck song, But instead, it became wrong. My room twirled with blaring sound, Sparked, plugged off, and then My world became peaceful. -Elvira

Ah choo! Here comes Fatty The new boy called Sneezy People love to tease him No one likes him His body is funny, sneezes like a kitty Poor Fatty, Cant’ be with anybody!

“Do not train a child to learn by force or harshness; but direct them to it by what amuses their minds, so that you may be better able to discover with accuracy the peculiar bent of the genius of each.” ― Plato

Broom, Broom! The car started. Brshhh, the car went Lalala we sang on our way to the zoo. As we arrived, woo! The elephant sound. Roarrrr, the king of the jungle. Fun fun fun until Bye animals! We’re going home. -Vianca

Yawn goes my father, Glug goes my mother, Just by that I could tell, It’s already morning. I went to the kitchen, I took my share, Crunch! And gulped Now I’m off – to school! - Bastian

One time, I saw myself In a shed full of shelves, Eating a horse as a main course As I went outside A dwarf war was on As the princess died I realized, It ‘s just a dream -Tamara

It’s the sound Of ferocious thunder Zap! The light goes off It makes it harder Finding the way out of This untidy room. - Grace

Middle School 7 Tunes up for the Second Open House October 05, 2013. Saturday, SMGS— Grade 7 students have never been as busy as this particular week as they tried filling their vacant times rehearsing their number for their participation in Mentari’s second Open House. The said open house was allotted for the new parents and students wanting to be part of the Mentari family. The primary teachers and students hastened their morning in that particular day as they started the program at 8 o’clock till eleven. The open house resumed about twelve noon time until the reach of two in the afternoon with some performance from grade 7. The principals, teachers and directors were very glad as the expectations were met.— TSNL