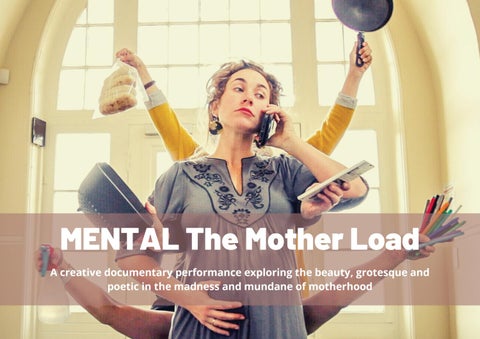 MENTAL The Mother Load A creative documentary performance exploring the beauty, grotesque and poetic in the madness and mundane of motherhood

The Motherload Project explores the questions... What is the mental load of motherhood? How does this change us as women? And how does this Motherload transform as our children grow?

Judy Chicago "The Creation" from the "Birth Project"

Since March 2018, the team have creatively engaged and spoke with as many Mums as possible. TWENTY-SIX creative provocations for our private Facebook group, which has 438 members, from across Tasmania, Australia, United States, Canada, New Zealand, Myanmar, Egypt and Singapore FIVE online workshops with the Facebook group TEN in-person workshops around Tasmania SEVENTEEN creative development days, FIVE with guest artists

Throughout this time, weâ&#x20AC;&#x2122;ve shared countless emotions, and have been gifted with an infinite amount of extraordinary stories in the form of poetry, pictures, prose, taped interviews, witty Facebook comments and music.

Every word in this work will come from these women, these mothers.

PLAYWORLD AND STYLE An abstract dreamscape where domestic objects become creatures, monsters turn into babies and time is fluid. The stage is the inside of a mother’s brain... a tribe of women’s brains.

The show is a combination of physical theatre, puppetry and object manipulation, with projected film images and a soundscape utilising a multitude of voices. PAPER ILLUSTRATION: KATHY DE CASTRO

THE SHAPE The life cycle of the mental load of motherhood. And how this mindworld transforms depending on the age of children. Gestation and Birth - Anticipation, Fear and Excitement The Baby Years - Sleeplessness The Toddler Years - Hands On Stickiness The Primary and Early Childhood Years - Project Management The Teenage Years - Transformative, Crisis Point The Empty Nest - Worrying from a Distance

GESTATION AND BIRTH When a baby enters the world, a mother is born. And with it, the mental load of motherhood.

THE BABY YEARS “The mental load feels like a hand permanently on my boob.” “It smells like cold black coffee and stale breast milk on my shirt.” “It sounds like an orchestra of primates learning the violin, constantly screeching.”

"Everything I read online about parenting with my first child increased my mental load. Sleep advice, Wonder Weeks, breastfeeding advice, attachment parenting, sleep training, the list goes on... I was really worried I wouldn’t know the signs that something was wrong or that my baby needed something and I was advised ‘You’ll just know’... I felt like I was throwing my baby off a cliff and he was going to hit the bottom before my wings kicked in to swoop down and catch him. Ever since I’ve always had this feeling I should know what’s wrong with my kids - and I must be defective because often I have no idea!" IMAGE SOUCRE UNKNOWN

THE TODDLER YEARS “It smells like stinky little cheese hands with hidden fluff.” “It sounds like the Klaxon alarm with white noise.” “It’s the taste of combrantrum washed down with a dry Riesling.”

â&#x20AC;&#x153;I shut myself in my bedroom... just for five minutes, I said to myself... I just need to be alone... I just need it to stop. But small children don't understand that, only what they need, so the knocks on the door and the voices calling through quickly came. I said â&#x20AC;&#x2DC;Mummy just needs five minutes' or something like that, but they didn't stop. I repeated it again and again, 'Mummy just needs to be alone... please go away... please please let Mummy have five minutes'...

“Nobody froze or starved to death in my house today. Went to a cafe with Mr 4 and neither of us had a tantrum.” BABYOLOGY - SHAZAMN 8 FACTS THAT PROVE MUMS ARE SUPOERHEROS

THE PRIMARY YEARS “(The Mental Load) smells like a primary school classroom - a series of disjointed and competing smells that combine to create something faintly saccharine, like apples left too long in the bottom of a school bag. There’s a safe familiarity to the smell, but after a while, the familiarity becomes cloying, overwhelming. You want to be able to clean away that smell, but the scent of bleach combines with the other scents competing for your attention. Cleaning products form part of the bouquet of the mental load, along with the pencil shavings and the overripe fruit. The scent reminds you of all the moments that came before, that form the natural rhythm of life as a parent.

It reminds you of the meals made and cleared away, of the washing left too long in the basket, of the muddy socks and of the lasagna of drawings and school forms and information sheets layered in the bottom of bags, stuck together with the fluid from leaking juice boxes and bruised fruit. The scent evokes both joy and boredom, and a faint ache for something just out of reach.” IMAGE: ARTIST - LIZZY STEWART

THE TEENAGE YEARS “(The Mental Load) smells like boy socks. Socks my hormonal son changes once a week. Once a week!” “At the moment mine feels like getting stung by nettles. A teenager with issues who has decided I am the enemy. In my mind, I am trying to walk the peaceful path towards her but I’m getting stung a lot! And the pain radiates for a while. But... I keep walking towards her as best I can.”

THE EMPTY NEST "I think as a parent of recent years, ah, it’s probably letting go, is the thing, and particularly as they get older they still need you a lot, but they make out they don’t, um but also the biggest challenge is that I have to let go of my, you know, knowing absolutely everything they do to knowing very little, and actually that’s ok, and allowing them to, to move out into the world and do what they need to do."

“Perhaps being good enough is where we need to actually aim as Mums. To kick off the shroud of perfection into the Mum that tries, fails, tries again, that perhaps it’s in our trying that we show our kids that it is THIS that’s important. To get up after little sleep, maybe not smiling, maybe not cooing to our baby, but still feeding him. To take him to the park, and maybe check your Facebook for a time because it gives space. But, you took him to the park. Perhaps it’s all in the trying and allowing ourselves to be human and fallible and just enough.” IMAGE SOUCRE UNKNOWN

META ELEMENT Throughout the making, the reality of being a Mum seeped into the creative workspace. The team is looking at adding a meta element to the final piece.

“Isabella has been a real turdler this morning and I’m only just arrived at daycare in Kingston so I will be late. But you have plenty to keep you busy and I’ll pick up some morning tea on my way in. Let me know of we need anything, milk etc xx” “Carrie, it’s Teresa from Rosny. Just ringing because your daughter Ashleigh is meant to be in Room 426 for an exam but we can’t find her.” “Just so you know in advance I’ve discovered a rash all over Kit and who had a fever and whinged all day yesterday. Fingers crossed he just rolled on grass at day care today and it isn’t hand foot and mouth. If you don’t hear from me in the morning we are in the clear." - “Hi, I’m running late because I discovered Sunny hair lice (aargh) and had to treat that. Its quite an infestation.”

NEXT The project has received funding from the Mister for the Arts through Arts Tasmania for Carrie McLean to write the full script, in consultation with Julie Waddington as Director and Roslyn Oades as mentor dramaturge.

For more info go to www.mentalthemotherload.com

Stage Two of MENTAL - The Mother Load project is assisted through Arts Tasmania by the Minister for the Arts, made possible by the Australian Government's Regional Arts Fund, which supports the arts in regional and remote Australia, and is supported by the City of Hobart and the Tasmanian Theatre Company. 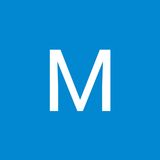 MENTAL - The Mother Load is a creative documentary performance exploring the beauty, grotesque and poetic in the madness and mundane of moth...

MENTAL - The Mother Load is a creative documentary performance exploring the beauty, grotesque and poetic in the madness and mundane of moth...