The Menokin Project: Re-imagining a Ruin 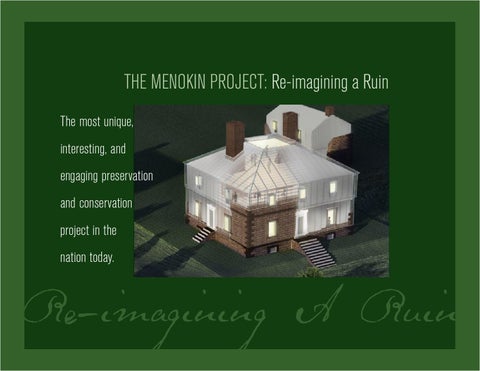 THE MENOKIN PROJECT: Re-imagining a Ruin The most unique, interesting, and engaging preservation and conservation project in the nation today.

The Menokin plantation and house were established in 1769 on land once inhabited by the Rappahannock Tribe. The house, accompanied by 1,000 acres, was a wedding gift to Francis Lightfoot Lee and Rebecca Tayloe from her father, John Tayloe II. Not long after its completion, Lee became a key figure in the early American Republic. He was one of only two brothers to sign the Declaration of Independence — hence the site’s ongoing recognition and significance. Today, Menokin is the only home of a Virginia signer of the Declaration of Independence that has not been secured.

The Menokin property lies directly on Cat Point Creek, an unspoiled tributary of the Rappahannock River.

Menokin is in Warsaw, Virginia, in the rural region known as the Northern Neck. An area of great beauty and historical significance, the region is the birthplace of three early presidents (Washington, Madison, and Monroe) and two Declaration of Independence signers (Francis Lightfoot Lee and his brother, Richard Henry Lee).

The Menokin property is:

• Within a three-hour drive of more than 10 million residents

• A two-hour drive from the National Capital Region

• Near a half-dozen international and many domestic airports

• On a peninsula surrounded by three bodies of water: the Potomac River, Rappahannock River, and Chesapeake Bay

After 1935, the Menokin house fell into a state of vacancy and disrepair. In the mid-1960s, the interior woodwork was removed to protect it from vandals and the elements. However, a tree fell on the house in the late 1960s, leaving the ruins we see today. Left: North elevation drawing from the 1940 Historic American Buildings Survey

Rescuing Menokin WHAT HAPPENS AT MENOKIN TODAY? Today, Menokin visitors can: • Learn about the property and see disassembled remains of the house at the Martin Kirwan King Conservation and Visitors Center and adjacent storage building • Participate in one of the programs, lectures, or workshops that the Foundation hosts on a regular basis • View the ruins of the house • Explore the farmland (still used for crops such as corn and soybeans)

The Menokin Foundation was established to protect and breathe new life into Menokin. The Foundation received the property in 1995 and immediately began work to not only reverse the deterioration of the house but also chart a course for its future. In casting this vision, As the first president of the the Foundation has always desired to do someMenokin Foundation, Martin Kirwan King (1934–2004) played thing innovative. Menokin’s advocates, staff, a crucial role in saving Menokin. and advisors have unanimously sought a unique approach to its revival ever since. Eighteen years of painstaking research, planning, conserving, and gathering of the “Menokin jigsaw puzzle” pieces have paved the way for an exceptional future. The staunch support and advocacy of more than 600 individuals have also been vital.

The Menokin Jigsaw Puzzle: A remarkable collection of Menokin’s colonial architectural elements — both exterior and interior — remains. The original front doorway (below), was reassembled in 2006 and is now on display to visitors.

The Martin Kirwan King Conservation and Visitors Center (below, right) opened in 2004. The large, on-site storage facility (left) opened to the public in 2006. In both, visitors can see original interior and exterior woodwork from the house.

The Menokin Glass House I realized that this idea of using glass to replace what was missing provided an opportunity that was unique. I became fascinated by this concept of using the fabric that’s there and the glass to recreate something that nobody in the historic preservation field has ever done before. The Honorable W. Tayloe Murphy Jr., President, Menokin Foundation Board of Trustees

A unique treatment plan for the existing historic house structure has been developed by Machado and Silvetti Associates. Machado and Silvetti has, in turn, assembled a multidisciplinary project team with an impressive array of credentials and expertise, including substantial international experience. The new Menokin will create a new paradigm in conservation and heritage management. The house will not be reconstructed as it once was; rather, innovative display techniques will be used to reveal the historic fabric of the building. The exterior will be partially encased in glass. Indoors, glass will be used in some areas to provide a catwalk and a transparent floor, through which visitors can see from the third floor to the basement. By visually showing the process of reconstruction, the story of Menokin will be told — not as a snapshot in time but as a continuing narrative — while serving as a powerful teaching tool. An ongoing research project and exhibit space, the restored house will feature a glass catwalk and accompanying gallery on the second floor looking down into the first-floor Chamber Room.

The dining room’s original paneling and millwork will be reinstalled.

MACHADO AND SILVET TI ASSOCIATES Leading the Menokin Project Team is architectural firm Machado and Silvetti Associates, noted by architecture critic Paul Goldberger as “modernists who have a love of classicism and believe that an architect best respects history not by imitating it, but by teasing its spirit into new forms.” The firm has won numerous awards, including the first-ever Award in Architecture from the American Academy of Arts and Letters. Founding Principal Jorge Silvetti has taught at the Harvard University Graduate School of Design since 1975; he chaired the Architecture Department from 1995 to 2002 and is currently the Nelson Robinson Jr. Professor of Architecture.

The Future of Menokin KEY FEATURES OF THE FUTURE MENOKIN Menokin aspires to attracting 50,000 visits annually (compared to 2,000 per year currently) during every season. EDUCATION At the intersection of the humanities and sciences, Menokin will be a center for thought leadership, discussion, and education in history, architecture, preservation, conservation, and archaeology. Programming will expand and include hands-on workshops, skills training, and lectures or discussions. EXHIBITIONS AND ART The house will be an exhibit itself as well as a space for displaying historic, modern, and interpretive installations. The Foundation is partnering with the Virginia Museum of Fine Arts to ensure that the house will meet the criteria needed to host high-quality exhibitions. OUTREACH AND EVENTS Menokin will host special events and performances, including a signature annual event, to which visitors from the community, region, and beyond will be welcomed.

A NEW APPROACH TO HISTORIC SITES

From that day in 1769 when the foundation was dug, Menokin has represented revolutionary thinking. That legacy will continue with the adaptive reuse of Menokin as a true cultural and learning hub. The site plan for Menokin will be realized in two phases. The focus of the plan and of Phase I is the Menokin Glass House: a unique architectural restoration for which some of the world’s leading engineers and designers in glass structure have been enlisted. Exhibits and programs that promote education, conservation, and preservation will also be vital components. Ultimately, the project will make Menokin a destination for local and international visitors alike. Menokin will be a “living landscape,” where people of all ages come to learn, reflect, engage, and be inspired. Already a Laboratory for Learning: During the spring 2013 semester, Harvard Graduate School of Design students focused solely on Menokin in a studio class that explored contemporary design solutions to tell the story of this historic site. Menokin’s other recent partners include American University, Rappahannock Community College, and the Virginia Center for Architecture.

CONSERVATION AND NATURE As part of the Rappahannock River Valley National Wildlife Refuge, Menokin’s 500 acres of undisturbed agricultural landscape is a nationally recognized bird habitat replete with diverse flora and fauna. Rehabilitation and interpretation of the landscape will foster reflection and appreciation for nature, values that were important to Francis Lightfoot Lee.

REST AND RECREATION Visitors will explore the outdoors and make active use of the varied landscape. Menokin has several access points to the water, and a boardwalk will be built to allow for canoe or kayak launching. Hiking trails will be expanded, and guests will have their choice of picnicking spots as well as food/ drink service options. 13

THE MENOKIN FOUNDATIONâ&amp;#x20AC;&amp;#x2122;S MISSION is to preserve and interpret the home and life of patriot Francis Lightfoot Lee, as a focus for better understanding the fields of history, architecture, archaeology, ecology, and other areas of the humanities, by developing innovative scholarship and new practices in conservation.

The Menokin Project: Re-imagining a Ruin

A visual overview of the history, rehabilitation and future of Menokin. 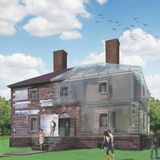