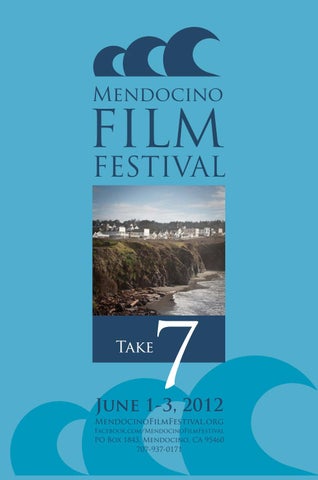 the fine print Ticket holders must arrive 20 minutes prior to show time to be guaranteed a seat.

We invite you, our treasured film-goers, to participate in the 2012 Audience Choice Award! Fill out the special ballots distributed at screenings and vote for your favorite featurelength film. The winner will be announced on our website and Facebook on Monday, June 4th. Sponsored by North Coast Brewing Co.

One hour before show time (subject to availability; cash only at the door)

(exclusive for Friends of the Festival members)

11:00 am . These Amazing Shadows with Mick LaSalle

ALL WE NEED IS LOVE

A high school student turns heads when he decides to avoid text-messaging a girl in this comedy-turned-romance about the power of letter writing. 2011 Rising Star Award, Rhode Island Film Festival. Produced with the help of a beginning high school/college crew and extras from 7 schools across Ontario.

“Beauty and seduction, I believe, is nature’s tool for survival, because we will protect what we fall in love with,” director Schwartzberg says about his film which explores nature, imagination and happiness.

Do you believe in love at first sight? When Arthur spots Ruth he knows in his heart that it’s true. Starring John Hurt and Phyllida Law. Best Director and Best Actress awards at the British Independent Film Festival.

Set in the 1960s where, to celebrate their anniversary, a man and wife make separate preparations for love, she in the boudoir and he in the kitchen. Jury Prize and Best Music Score, Festival Premier Regard.

Separated by the sea, a unique duo pass along details of their lives through a bottle. Vimeo Audience Award for Animation.

Sidney Sanders suffers from cataplexy, an unusual medical condition in which he is literally paralyzed when he feels love, so he seeks the superficial company of call girls. Audience Choice Award for Best Short, Sedona International Film Festival.

A comic twist on the classic Cyrano de Bergerac tale, which tells the story of Earl, a kindly after-school tutor cursed with a pair of enormous ears. King Award for Screenwriting, NYU First Run Festival.

A young boy moves to a new neighborhood and falls in love with the much older girl next door. People’s Choice Award for Animation, Netherlands Film Festival.

A young man whose pinnacle of job success is holding advertising signs on London’s busy Oxford Street, spends his life making announcements, but is too shy to talk to the girl he fancies. Grand Prize, Media Shorts Competition.

Saturday, June 2, 3:00 pm, Crown Hall - $10 Widely revered as the “Dean of Documentary Filmmaking,” Albert Maysles joined as our special guest and advisor in 2007. This year he will honor director Ralph Arlyck with the annual Albert Maysles Award for Excellence in Documentary Filmmaking. Please join us for this special conversation and screening of Arlyck’s classic film Following Sean. AWARD WINNER: RALPH ARLYCK Ralph Arlyck, through his company, Timed Exposures, has produced and directed more than a dozen prize-winning, independent films, which have played theatrically in the U.S. and Europe and have appeared on PBS, the BBC, screened at the White House, and have been invited to festivals worldwide, including Sundance, New York, London, and Sydney.

Sunday, June 3, 10:00 am, Crown Hall - $10 Brothers On The Line is a stirring portrait of the lives and legacy of the Reuther brothers – Walter, Roy, and Victor – pioneering labor leaders under the banner of the United Auto Workers union. Directed by Victor’s grandson Sasha Reuther, and narrated by Martin Sheen, the film follows the brothers as they rise from militant shop-floor organizers in 1930s Detroit, winning unprecedented quality-of-life gains from the mighty Big 3 automakers, to visionary statesmen in collective bargaining, civil rights, and international labor solidarity. (80 min.)

Arlyck has received a Guggenheim Fellowship and a Rockefeller Foundation Fellowship. He has played an important advocacy role for American independent producers, testifying twice in Congress and once before the Carnegie Commission on the role of independents in public television. He was centrally involved in legislation which first recognized independents as an important force within that system.

In 1969, a precocious 4-year-old named Sean sat barefoot on a couch in San Francisco and talked about smoking pot, living with speed freaks, and watching cops bust heads. Ralph Arlyck made a short film of it all. Now, 30 years later, he returns to find Sean, his free-spirit parents, and communist grandparents to track the course of their lives — and his own — since those halcyon but noisy days. Things never turn out the way you think. (87 min.)

Saturday, June 2, 8:00 pm, Crown Hall - $10 “If everyone played the ukulele, the world would be a better place,” says Hawaiian-born Jake Shimabukuro, who has captivated audiences across the globe with his jaw-dropping mastery of the ‘uke.’ His technical virtuosity and broad musical palette – including jazz, rock, original Hawaiian standards, and innovative pop covers – have fundamentally redefined how the seemingly limited instrument is perceived by millions of people. (54 min)

THESE AMAZING SHADOWS Directed by Paul Mariano and Kurt Norton

What do the films Casablanca, Blazing Saddles and West Side Story have in common? These Amazing Shadows reveals how “American movies tell us so much about ourselves... not just what we did, but what we thought, what we felt, what we aspired to, and the lies we told ourselves.” (88 min.)

Sunday, June 3, 12:30 pm, Crown Hall - $10 100 Days. 100 gritty souls. 100 wild mustangs. That’s the premise of the annual Extreme Mustang Makeover, a competition that challenges horse trainers – both pros and amateurs – to each tame a totally wild horse in order to get it adopted into a better life beyond U.S. Government corrals. Intimately following a handful of participants in the 2009 event from their first uneasy meeting with their horses and up through the competition and adoption, the film documents the deep and profound bonds that can develop between man and beast. (106 min.)

TRIMPIN: THE SOUND OF INVENTION

Directed by Peter Esmonde; edited by Rick Tejada-Flores Filmmaker and editor in attendance

Trimpin: The Sound of Invention is an amusing journey through the sonic world of an eccentric creative genius. Artist/inventor/engineer/composer Trimpin shuns the hype and hyperbole of the commercial art world – yet his freewheeling sculptures and outrageous musical experiments are cherished by museums all over the planet. The film follows the artist/inventor as he designs a 60-foot tower of more than 500 automatic electric guitars; builds an ensemble of huge marimbas that converts real-time earthquake data into music; and collaborates with the Kronos Quartet on an outrageous world premiere featuring toy instruments. (79 min.)

Judi Bari and Darryl Cherney were falsely arrested for car-bombing themselves on May 24, 1990 while on an Earth First! musical organizing tour for Redwood Summer. They sued the FBI for violations of the First Amendment, claiming the FBI knew they were innocent but arrested them to silence them. Having survived the bomb but now stricken by cancer, Judi Bari, a leader of the movement to save California’s old growth redwoods, gives her on-camera, deathbed testimony about the attempt on her life and her colorful organizing history with the radical environmental movement Earth First! Environmentalism and civil rights collide in an epic tale of saving the redwoods and ultimately ourselves. (93 min.)

NEW THIS YEAR! the mendocino film festival is proud to announce two new venues in 2012!

Saturday, June 2, 12:30 pm, Crown Hall - $10 Wonder Women! The Untold Story of American Superheroines traces the fascinating birth, evolution and legacy of Wonder Woman and introduces audiences to a dynamic group of fictional and real-life super heroines fighting for positive role models for girls, both on screen and off. (62 min.)

ARENA THEATER IN POINT ARENA FRIENDS OF THE FESTIVAL

We are so grateful to our Friends for their support in bringing the highest quality independent films and special events to the Mendocino Coast.

OUR FABULOUS VOLUNTEERS Special thanks to all our fabulous volunteers! Without you there would be no Mendocino Film Festival. You help give us a reputation of professionalism and warmth that filmmakers and audiences notice. You make us special!

GENEROUS IN-KIND DONORS Extra special thanks to our fabulous hospitality sponsors and to our favorite restaurants and local businesses for their donations to the festival and throughout the year.

See the list on screen and on our website! COAST CINEMAS IN FORT BRAGG 135 s. franklin st., fort bragg www.thecoastcinemas.com

SPONSORS the festival is profoundly grateful to the following sponsors.

We thank all of our film sponsors who help bring films and filmmakers to the coast. See the list on screen and on our website.