What's to Become of the Boy 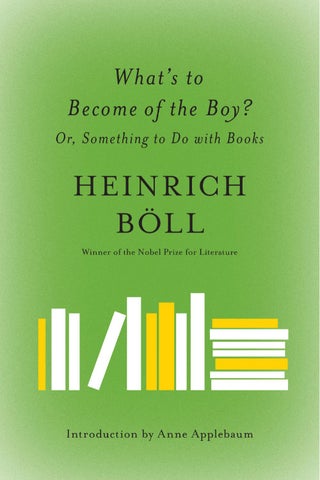 W hat’s to Become of the Boy? Or, Something to Do with Books

1 On January 30, 1933, I was fifteen years and six weeks old, and almost exactly four years later, on February 6, 1937, when I was nineteen years and seven weeks old, I graduated from high school with a “Certificate of Maturity.” This certificate contains two errors: my date of birth is incorrect, and my choice of career—“book trade”— was altered by the school principal, without consulting me, to “publishing,” I have no idea why. These two errors, which I cherish, justify me in regarding all the other particulars, including my grades, with some skepticism. I didn’t discover either of these errors until two years later, when, as the 1939 university summer term was about to begin, I looked at the certificate before handing it in to the University of Cologne and discovered the incorrect birth date. It would never have occurred to me to have an error of that kind in such a solemn official document corrected: that error permits me to entertain a certain doubt as to whether I am really the person who is certified thereon as mature. Might the document refer to someone else? If so, to whom? This little game also allows me to consider the possibility that the entire document may be invalid. There are a few further points that I must clarify. If it should be regarded as mandatory for German authors 5

to have “suffered” under the school system, I must once again appear to have failed in my duty. Of course I suffered (do I hear a voice: “Who, old or young, does not suffer”?), but not in school. I maintain that I never let things get that far. I dealt with each problem as it arose, as I so often did in later life, aware of the implications. How, is something I shall explain later. I did find the transition from elementary to high school briefly painful, but I was ten at the time, so this is not relevant to the period I wish to describe. I was sometimes bored in school, annoyed, chiefly by our religion teacher (and he, of course by me: such comments are to be interpreted bilaterally), but did I “suffer”? No. Further clarification: my unconquerable (and still unconquered) aversion to the Nazis was not revolt: they revolted me, repelled me on every level of my existence: conscious and instinctive, aesthetic and political. To this day I have been unable to find any entertaining, let alone aesthetic, dimension to the Nazis and their era, a fact that makes me shudder when I see certain film and stage productions. I simply could not join the Hitler Youth, I did not join it, and that was that. A further clarification (there is yet another to come!): justifiable mistrust of my memory. All this happened forty-eight to forty-four years ago, and I have no notes or jottings to resort to; they were burned or blown to bits in an attic of 17 Karolinger-Ring in Cologne. Moreover, I am no longer sure of how some of my personal experiences synchronize with historical events. For example, I would have bet almost anything that it was in the fall of 1934 that Göring, in his capacity as Prime Minister of

Prussia, caused seven young Communists of Cologne to be beheaded with an ax. I would have lost that bet: it was the fall of 1933. And my memory doesn’t betray me when I recall that one morning a schoolmate of mine, a member of the black-uniformed S.S., exhausted yet with the hectic light of the chase still in his eyes, told me they had spent the night scouring the villas of Godesberg for the former cabinet minister Treviranus. Thank God (as I, not he, thought) without success. But when, to make quite sure, I proceed to look it up, I find that Treviranus had already emigrated by 1933; in 1933, the minimum age for membership in the S.S. was eighteen, though we were only sixteen then; thus, this memory cannot be placed earlier than 1935 or 1936. In other words, either Treviranus must have reentered the German Reich illegally in 1935 or 1936, or the S.S. must have been fed wrong information. The story itself—that strange blend of exhaustion and eyes shining with the light of the chase—I can vouch for, but I cannot place it. Final clarification or, if you prefer, warning: the title What’s to Become of the Boy? should arouse neither false hopes nor false fears. Not every boy whose family and friends have reason to ask themselves and him this eternally apprehensive question does, after various delays and roundabout approaches, eventually become a writer; and I would like to stress that, at the time it was put, this question was both serious and warranted. In fact, I am not sure whether my mother, were she still alive, wouldn’t still be asking the same question today: “What’s to become of the boy?” Perhaps there are times when we

should be asking it about elderly and successful politicians, church dignitaries, writers, et cetera.

Translator’s Dedication My warm thanks to my husband, William, whose skill, knowledge, and patience have contributed so much to this translation. Leila Vennewitz

A catalog record for this book is available from the Library of Congress.

What's to Become of the Boy

What’s to Become of the Boy? is a spirited, insightful, and wonderfully sympathetic memoir about life during wartime written with characteristic brilliance by one of the 20th-century’s most celebrated authors. It is both an essential autobiography of the Nobel Prize-winning author and a compelling memoir of being young and idealistic during an age of hardship and war.