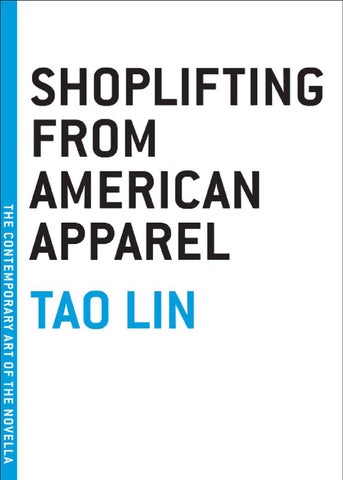 Sam woke around 3:30 p.m. and saw no emails from Sheila. He made a smoothie. He lay on his bed and stared at his computer screen. He showered and put on clothes and opened the Microsoft Word file of his poetry. He looked at his email. About an hour later it was dark outside. Sam ate cereal with soymilk. He put things on eBay then tried to guess the password to Sheila’s email account, not thinking he would be successful, and not being successful. He did fifty jumping jacks. “God, I felt fucked lying on the bed,” he said to Luis a few hours later on Gmail chat. “I wanted to fall asleep immediately but that is impossible. I need to fall asleep. Any second now. Just fall down asleep.”

“I played video games,” said Luis. “Perfect Dark. I killed people for two hours then I got bored. I know what you mean by impossible.” “This is fucked,” said Sam. “You know those people that get up every day, and do things,” said Luis. “I’m going to eat cereal even though I’m not hungry,” said Sam. “And are real proactive,” said Luis. “And like are getting things done, and never quit their jobs. Those people suck.” “We get shit done too,” said Sam. “Look at our books.” “I know, but that brings in no money,” said Luis. “Are we, like, that word ‘bohemians.’ Or something. Our bios: ‘They lived in poverty writing their masterpieces.’” “We are the fucked generation,” said Sam. “Someone release the press release announcing this. Look at that typo.” The word “announcing” was almost twice as long as normal. “I’m laughing,” said Luis. “That is a good typo.” “How do we get out of this,” said Sam. “ ‘Their shoes were shit, they couldn’t afford haircuts, they were stealing to stay alive, living off

“Sheila won’t talk to you,” said Luis. “Or is it because your cell phone broke.” “No,” said Sam. “We just didn’t talk since yesterday. We are like fighting or something. Or I just didn’t email her or something.” “When Marissa and I fight we lay on our sides for an hour in different rooms and wait for the person that was mean to come into the room and say they are sorry, then we existentially attack each other in very quiet voices,” said Luis. “That sounds great,” said Sam. “It’s only 11 p.m. What are we going to do for six hours.” “Do you sometimes look up from the computer and look around the room and know you are alone, I mean really know it, then feel scared,” said Luis. “Yes,” said Sam. “I really do that.” “Should we kill ourselves now or start crying or punch ourselves in the nuts,” said Luis. “What is wrong with us,” said Sam. “Should I email Sheila. Or wait until she emails me. I have no car, phone, bike. I’m going to add more people on MySpace.” “We are so weird,” said Luis. “We met online a year ago. And we are up a year later being weird as shit.” “One year,” said Sam. “This is weird.” “I feel like my chest is going to explode,” said Luis.

“I’m adding random people on MySpace,” said Sam. “I feel weird,” said Luis. “Like I was molested by my uncle or something. You are on the floor. With the blanket around you.” “The blanket is over my head,” said Sam. “Are we fucked,” said Luis and got off the internet. Sam stared at his computer screen. He lay on his bed. It was November. Sam was in a rural area of Pennsylvania. He had moved here from New York City a few months ago to be near Sheila. He rolled off his bed and looked at his computer screen. Luis was back. “I just laid down and tried to cry,” said Sam. “I made a noise.” “My computer took a shit for a second,” said Luis. “I can’t think,” said Sam. “I’m going to do push-ups. What if Sheila and I break up. I’d be so fucked.” “You still like each other right.” “Yeah,” said Sam. “I don’t know.” “I don’t know what to do,” said Luis. “Do you wake up most days and your first thoughts are of literature, you go to sleep thinking about literature.” “Yes,” said Sam. “That is all I think about. If I’m having a shitty time with Sheila’s mom I

think about writing it in my novel later. I think about that the same time it’s happening.” “When I’m talking to someone I think ‘can I use this dialogue in a book,’ ” said Luis. “If the answer is no I try talking to someone else.” “Has Marissa ever threatened to kill you,” said Sam. “Oscar Wilde said that a genius is a spectator to their own life, to the point that the real genius is uninteresting,” said Luis. “No, Marissa has never threatened to kill me.” “Oscar Wilde was stupid though,” said Sam. “Yeah, you’re right,” said Luis. “My chest is going to explode.” “My face is going to float away from my skull,” said Sam. “To emo music.” “What are we going to do,” said Luis. “We met each other in real life and didn’t talk that much.” “I don’t know,” said Sam. “Publish more books.” Luis sent Sam a link to a porno site. “I already masturbated, should I really do it again,” said Sam. “I already masturbated today also,” said Luis. “If you need to I’ll go away.” “No, I’m just looking a little,” said Sam. “Masturbation is an escape from literature,” said Luis and emailed Sam a photo of a stripper.

About four months later Sam was living with Sheila in a suburban area of Pennsylvania. He was alone in Sheila’s mother’s house drinking iced coffee and looking at his poetry on the computer screen. The room was sunny and Sam felt warm. He looked out the window at a compost pile and an aboveground swimming pool. A few days later he and Sheila were on a train to New York City. They drank from a large plastic bottle containing organic soymilk, energy drink, and green tea extract and wrote sex stories to sell to nerve.com for $500. Sheila’s sex story had chainsaws and Sam’s sex story had Ha Jin doing things in a bathroom at Emory University. Sheila said she felt excited to be in New York City soon. They talked about making their own energy drink company. They got off the train and stood

THE ART OF THE NOVELL A

oTHer TiTLes in THE CONTEMPORARY ART OF THE NOVELL A SERIES

THE CONTEMPORARY ART OF THE NOVELL A In a work that’s sure to be controversial, the American Murakami describes a youth culture attacking the mainstream mindset with scathing wi...

In a work that’s sure to be controversial, the American Murakami describes a youth culture attacking the mainstream mindset with scathing wi...