The Nice Old Man and the Pretty Girl 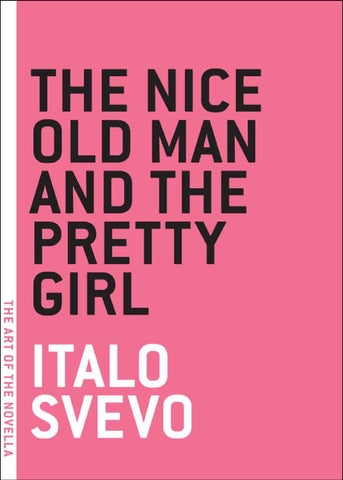 THE NICE OLD MAN AND THE PRETTY GIRL

THERE was a prelude to the adventure of the nice old man, but it developed almost without his being aware of it. During a short break in his work he had been obliged to see in his office an old woman who introduced him to a girl in whom she tried to inter­ est him, her own daughter. They had been granted an interview because they brought a letter from a friend of his. Called off thus suddenly from his work, the old man could not get it altogether out of his mind. He looked in bewilderment at the note, trying to take it in and put an end to the interruption as soon as possible. The elder woman did not cease talking for a mo­ ment, but he caught or understood only a few short sentences: “The young woman was strong and intel­

ligent, she could read and write, but she read better than she wrote.” Then a sentence struck him, be­ cause it was so odd: “My daughter will take any work for the whole day, provided she has the short time off she needs for her daily bath.” Finally the old woman made the remark which brought the scene to a swift close: “They are taking women as drivers and con­ ductors on the trams now.” Quickly making up his mind, the old man wrote an introduction to the Manager of the Tramway Com­ pany and dismissed the two women. Left alone with his work, he interrupted it for a moment to think: “What on earth did that old woman mean by telling me that her daughter bathes every day?” He shook his head, smiling with an air of superiority. This shows that old men are really old when they have to do anything. 14

A tram was running down the long Viale di Santâ&amp;#x20AC;&amp;#x2122;Andrea. The driver, a pretty girl of twenty, kept her brown eyes fixed on the broad, dusty road, bathed in sun. She enjoyed driving the car at full speed, so that the wheels creaked when she changed gear and the body of the crowded tram jolted. The avenue was empty, but as she sped along the girl never ceased pressing her small nervous foot on the lever that rang the bell. This she did not as a precaution, but because she was young enough to be able to turn her work into a game, and she enjoyed going a good pace and making a noise with this amusing toy. All children like shouting when they run. She was dressed in old colÂ­ oured clothes, which made her great beauty look as if disguised. A faded red jacket left free her neck, which

was massive in comparison with her small, rather pinched face; free, too, the clean足cut hollow that runs from the shoulder to the delicate curve of the breasts. The blue skirt was too short, perhaps because in the third year of the war there was a scarcity of material. The tiny foot looked naked in a small cloth shoe and the blue cap crushed her black curls, which were cut short. Judged only by her head she might have been a boy, if the pose of that alone had not betrayed co足 quettishness and vanity. On the footboard round the fair driver there were so many people that it was hardly possible to work the brakes. Among them was our old man. He had to bend backwards at some of the more violent jerks of the tram to prevent being shot on to the driver. He was dressed with great care, but in a sober style suited to his age. His appearance was really well bred and pleasing to the eye. Well足nourished though he was, among all these pale and anaemic people, there was nothing to give offence in him, because he was neither too fat nor too prosperous looking. From the colour of his hair and his short moustache you would have said he was sixty or rather less. There was no sign about him of an attempt to look younger. Years may be a hindrance to love, and for many years he had ceased to give it a thought, but they favour business, and he carried his years with pride, and, so to speak, youthfully. On the other hand he had the caution of his years, and he was not happy in that gigantic car driven at

The nICe old man and The preT T y gIrl

such a pace. The first word he spoke to the girl was one of warning: “Signorina!” At such polite language the girl turned her beau­ tiful eyes towards him doubtfully, not being sure that he was addressing her. Her bright look gave the nice old man so much pleasure that his fears almost van­ ished. He changed the warning that would have had a touch of bitterness into a joke: “It makes no differ­ ence to me whether I am a minute or two sooner or later at the Tergesteo.” The people round him might believe that he was smiling at his own joke, but as a matter of fact his smile had been directed towards her eye, which had struck him as full of delicious im­ pertinence and at the same time innocent. Beautiful women always strike us at first as intelligent. A beau­ tiful complexion or a beautiful line are, in fact, the expression of the highest intelligence. She did not catch the words, but she was com­ pletely reassured by the smile that allowed no doubt as to the kindly feelings of the old man. She under­ stood that he was uncomfortable standing and made room for him to lean upon the rail close by her. She kept on at breakneck speed to the Campo Marzo. Then the girl, looking at the nice old man as if asking him to agree with her, sighed: “Here’s where the real trouble begins.” And the tram began to jolt slowly and heavily over the rails. When a really young man falls in love, his love often sets up in his brain reactions that end by hav­ ing nothing to do with his desire. How many young

men who might enjoy peace and bliss in a hospitable bed, insist on abandoning at least their homes, in the belief that, in order to sleep with a woman, you must first conquer, create or destroy! Old men, on the other hand, who are said to be better protected against the passions, give themselves up to them in full knowl­ edge and enter the bed of sin with no other precau­ tion than a due regard for catching chills. Not that love is simple, even for old men. For them its motives are complicated. They know that they must make excuses. Our old man said to him­ self: “This is my first real adventure since the death of my wife.” In the language of the old an adventure is real when it involves the heart. It may be said that an old man is rarely young enough to be able to have an adventure that is not real, because this is an extension that serves to mask a weakness. Similarly, when weak men give a punch, they use not only the hand, the arm and the shoulder, but also the chest and the other shoulder. The blow is feeble owing to the excessive extension of the effort, while the adventure loses in distinctness and becomes more risky. Then the old man thought that it was the child­ like eye of the girl that had conquered him. Old men, when they fall in love, always pass through a stage of paternity and each embrace is an act of incest, carry­ ing with it the bitter savour of incest. And the third important idea the old man had when he felt himself deliciously guilty and deli­

The nICe old man and The preT T y gIrl

ciously young, was: “My youth is returning.” So great is the selfishness of an old man that his thoughts do not remain fixed on the object of his love for a single moment without immediately turning back to con­ template himself. When he wants a woman, he is like king David, expecting to have his youth renewed by young girls. The old man of classical comedy who is con­ vinced that he can rival youth must be very rare to­ day, if indeed he still exists. My old man continued to soliloquise and said to himself: “Here is a girl I shall buy, if she is for sale.” “Tergesteo—Are you not getting off?” asked the girl before starting the tram. The nice old man, rather confused, looked at his watch. “I shall go on a little further,” he said. There was no longer a crowd, and he had no fur­ ther excuse for remaining so near the girl. He stood up and leant back in a corner whence he could see her comfortably. She must have been aware that she was being looked at, because, when she was not busy driving, she examined him curiously. He asked her how long she had been at this tiring job. “A month.” It was not so very tiring, she said, just as she was forced to lean the whole of her small body against a lever to apply the brake, but sometimes very dull. Worst of all, the pay was not enough. Her father still worked, but with food at such a price, it was hard to make ends meet. And, still intent upon her work,

OTHER TITLES IN THE ART OF THE NOVELL A SERIES

THE ART OF THE NOVELL A

THE CONTEMPORARY ART OF THE NOVELL A

The Nice Old Man and the Pretty Girl

The fable-like story of an old man's sexual obsession with a young woman is a distillation of Italo Svevo's concerns--attraction of an older man to a younger woman, individual conscience versus social convention, and the cost of sexual desire. This novella is a marvel of psychological insight, following the man's vacillations and tortuous self-justifications to their tragic-comic end. It is presented here in a translation first commissioned and published by Virginia Woolf for her Hogarth Press.