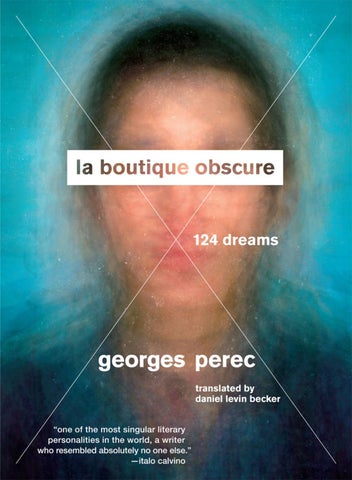 translated and with an afterword by daniel levin becker

Preface Everyone has dreams. Some remember theirs, far fewer recount them, and very few write them down. Why write them down, anyway, knowing you will only sell them out (and no doubt sell yourself out in the process)? I thought I was recording the dreams I was having; I have realized that it was not long before I began having dreams only in order to write them. These dreams—overdreamed, overworked, overwritten—what could I then expect of them, if not to make them into texts, a bundle of texts left as an offering at the gates of that “royal road” I still must travel with my eyes open?

Insofar as I have sought some degree of homogeneity in the transcription and then the composition of these dreams, it seems worth giving a few specifications on their typography and formatting: —a paragraph break corresponds to a change in time, place, feeling, mood, etc., felt as such within the dream; —the use of italics, which is rare, indicates a particularly striking element of the dream; —the greater or lesser size of the gap between paragraphs is meant to correspond to the greater or lesser importance of passages that were forgotten or indecipherable upon waking; —the sign / / indicates an intentional omission.

The height gauge The height gauge (the name escapes me: metronome, perch) where must stay ad. lib. for several hours. Naturally. The armoire (the two hiding places). The rehearsal. Humiliation. ?. Arbitrary power. A scene with several people. There is a height gauge in the corner. I know I am at risk of having to spend several hours under it; itâ&#x20AC;&#x2122;s an act of bullying rather than real torture, but extremely uncomfortable, because there is nothing holding the top of the gauge and, after a while under it, one might shrink. Naturally, I am dreaming and I know that I am dreaming, naturally, that I am in a prison camp. Itâ&#x20AC;&#x2122;s not really a prison camp, of course, but an image of a prison camp, a dream of a prison camp, a prison-camp metaphor, a prison camp I know only as a familiar image, as though I were ceaselessly dreaming the same dream, as though I never dreamed of anything else, as though I never did anything but dream of this prison camp. 3

It’s clear that the threat of the gauge is enough, at first, to concentrate in itself all the terror of the camp. And then it seems it’s not so bad. In any case, I escape the threat; it doesn’t come to pass. But it is precisely my avoidance of this threat that most clearly proves the essence of the camp: the only thing that saves me is the indifference of the torturer, his liberty to do or not to do; I am entirely at the mercy of his arbitrary power (in exactly the same way as I am at the mercy of this dream: I know it is only a dream, but I cannot escape it). The second sequence modifies these themes slightly. Two characters (one is without a doubt myself ) open an armoire in which two hiding spots have been forged, crammed with deportees’ valuables. By “valuables” I mean any objects that could increase the safety and chances of survival of their owner, be they bare necessities or objects with some exchange value. The first hiding spot contains woolens, countless woolens, old and moth-eaten and drab. The second hole, which contains money, is made of a rocker device: one of the armoire’s shelves is hollow inside and its cover lifts up like that of a school desk. But this little stash seems unsound, and I am just activating the mechanism that opens it to take the money out when someone enters. An officer. In an instant we

understand that all of this is useless anyway. It also becomes clear that dying and leaving this room are one and the same. The third sequence could surely, had I not forgotten it completely, have supplied a name for the camp: Treblinka, or Terezienbourg, or Katowice. The performance might have been the Terezienbourg Requiem (Les Temps modernes 196., no., pp. . . .â&#x20AC;&#x201C;. . .). The moral of this faded episode seems to invoke older dreams: we can save ourselves (sometimes) by playing. . . .

Tiles With a laugh that can be described only as â&#x20AC;&#x153;sardonic,â&#x20AC;? she began to make passes at a stranger, in my presence. I said nothing. She kept it up, so I eventually left the room. I am in my room with A. and a casual acquaintance, whom I am teaching to play Go. He seems to understand the game, until I realize he thinks he is learning to play bridge. The game actually consists of distributing letter tiles (more like a kind of lotto than a kind of Scrabble).

Itinerary : known secret maze, doors of chests (round, armored), hallways, very long trek toward the encounter and then the same path now known to all.

Illusion I am dreaming She is beside me I tell myself Iâ&#x20AC;&#x2122;m dreaming But the pressure of her hand against mine feels too strong I wake up She really is beside me Delirious joy I turn on the lights Light bursts forth for a hundredth of a second then goes out (a rattling lamp) I embrace her (I wake up: I am alone)

The dentist At the end of a maze of covered walkways, a bit like in a souk, I arrive at a dentist’s office. The dentist is out but her son, a young boy, is there. He asks me to come back later, then changes his mind and tells me his mother will be back any moment. I leave. I run into a tiny woman, pretty and cheerful. It’s the dentist. She leads me to the waiting room. I tell her I don’t have time. She opens my mouth very wide and bursts into tears as she tells me that all my teeth are rotten but that it’s not worth treating them. My mouth, open wide, is immense. I have an almost palpable sensation of total rot. My mouth is so large, and the dentist so small, that I suspect she is going to put her whole head in my mouth. Later, I run through the shopping mall. I buy a threeburner gas stove that costs 26,000 francs and a 103-liter refrigerator.

Farewell One day, I will tell her I am leaving her. She will call her daughter nearly immediately to say she is not going to Dampierre. Over the course of the telephone conversation, her pretty face will fall apart.

On my old days Despite your certainty that you are still young, you must not be so young anymore, since two of your dearest friends are already dead and a third is dying. . . It was like those Flaubert letters: “We have buried Jules. . .” (or is it Edmond?). Who were those two dead friends? Wasn’t one of them Claude? Régis? “To read Georges Perec one must be ready to abandon oneself to a spirit of play. His books are studded with intellectual traps, allusions an...

“To read Georges Perec one must be ready to abandon oneself to a spirit of play. His books are studded with intellectual traps, allusions an...