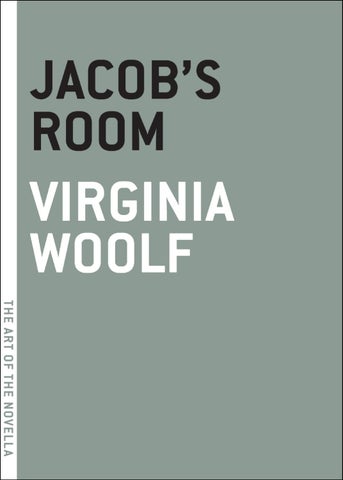 “So of course,” wrote Betty Flanders, pressing her heels rather deeper in the sand, “there was nothing for it but to leave.” Slowly welling from the point of her gold nib, pale blue ink dissolved the full stop; for there her pen stuck; her eyes fixed, and tears slowly filled them. The entire bay quivered; the lighthouse wobbled; and she had the illusion that the mast of Mr. Connor’s little yacht was bending like a wax candle in the sun. She winked quickly. Accidents were awful things. She winked again. The mast was straight; the waves were regular; the lighthouse was upright; but the blot had spread. “. . . nothing for it but to leave,” she read. “Well, if Jacob doesn’t want to play” (the shadow of Archer, her eldest son, fell across the notepaper and looked blue on the sand, and she felt chilly—it was the third of September already), “if Jacob doesn’t want to play”—what a horrid blot! It must be getting late.

“Where is that tiresome little boy?” she said. “I don’t see him. Run and find him. Tell him to come at once.” “. . . but mercifully,” she scribbled, ignoring the full stop, “everything seems satisfactorily arranged, packed though we are like herrings in a barrel, and forced to stand the perambulator which the landlady quite naturally won’t allow. . . .” Such were Betty Flanders’s letters to Captain Barfoot— many-paged, tear-stained. Scarborough is seven hundred miles from Cornwall: Captain Barfoot is in Scarborough: Seabrook is dead. Tears made all the dahlias in her garden undulate in red waves and flashed the glass house in her eyes, and spangled the kitchen with bright knives, and made Mrs. Jarvis, the rector’s wife, think at church, while the hymn-tune played and Mrs. Flanders bent low over her little boys’ heads, that marriage is a fortress and widows stray solitary in the open fields, picking up stones, gleaning a few golden straws, lonely, unprotected, poor creatures. Mrs. Flanders had been a widow for these two years. 4

“Ja—cob! Ja—cob!” Archer shouted. “Scarborough,” Mrs. Flanders wrote on the envelope, and dashed a bold line beneath; it was her native town; the hub of the universe. But a stamp? She ferreted in her bag; then held it up mouth downwards; then fumbled in her lap, all so vigorously that Charles Steele in the Panama hat suspended his paint-brush. Like the antennae of some irritable insect it positively trembled. Here was that woman moving—actually going

to get up—confound her! He struck the canvas a hasty violet-black dab. For the landscape needed it. It was too pale—greys flowing into lavenders, and one star or a white gull suspended just so—too pale as usual. The critics would say it was too pale, for he was an unknown man exhibiting obscurely, a favourite with his landladies’ children, wearing a cross on his watch chain, and much gratified if his landladies liked his pictures—which they often did. “Ja—cob! Ja—cob!” Archer shouted.

Steele frowned; but was pleased by the effect of the black—it was just that note which brought the rest together. “Ah, one may learn to paint at fifty! There’s Titian. . .” and so, having

Exasperated by the noise, yet loving children, Steele picked nervously at the dark little coils on his palette. “I saw your brother—I saw your brother,” he said, nodding his head, as Archer lagged past him, trailing his spade, and scowling at the old gentleman in spectacles. “Over there—by the rock,” Steele muttered, with his brush between his teeth, squeezing out raw sienna, and keeping his eyes fixed on Betty Flanders’s back. “Ja—cob! Ja—cob!” shouted Archer, lagging on after a second. The voice had an extraordinary sadness. Pure from all body, pure from all passion, going out into the world, solitary, unanswered, breaking against rocks—so it sounded.

found the right tint, up he looked and saw to his horror a cloud over the bay. Mrs. Flanders rose, slapped her coat this side and that to get the sand off, and picked up her black parasol.

The rock was one of those tremendously solid brown, or rather black, rocks which emerge from the sand like something primitive. Rough with crinkled limpet shells and sparsely strewn with locks of dry seaweed, a small boy has to stretch his legs far apart, and indeed to feel rather heroic, before he gets to the top. But there, on the very top, is a hollow full of water, with a sandy bottom; with a blob of jelly stuck to the side, and some mussels. A fish darts across. The fringe of yellow-brown seaweed flutters, and out pushes an opal-shelled crab— “Oh, a huge crab,” Jacob murmured— and begins his journey on weakly legs on the sandy bottom. Now! Jacob plunged his hand. The crab was cool and very light. But the water was thick with sand, and so, scrambling down, Jacob was about to jump, holding his bucket in front of him, when he saw, stretched entirely rigid, side by side, their faces very red, an enormous man and woman. An enormous man and woman (it was early-closing day) were stretched motionless, with their heads on pockethandkerchiefs, side by side, within a few feet of the sea, while two or three gulls gracefully skirted the incoming waves, and settled near their boots. The large red faces lying on the bandanna handkerchiefs stared up at Jacob. Jacob stared down at them. Holding his bucket very carefully, Jacob then jumped deliberately and

trotted away very nonchalantly at first, but faster and faster as the waves came creaming up to him and he had to swerve to avoid them, and the gulls rose in front of him and floated out and settled again a little farther on. A large black woman was sitting on the sand. He ran towards her. “Nanny! Nanny!” he cried, sobbing the words out on the crest of each gasping breath. The waves came round her. She was a rock. She was covered with the seaweed which pops when it is pressed. He was lost. There he stood. His face composed itself. He was about to roar when, lying among the black sticks and straw under the cliff, he saw a whole skull—perhaps a cow’s skull, a skull, perhaps, with the teeth in it. Sobbing, but absent-mindedly, he ran farther and farther away until he held the skull in his arms.

“There he is!” cried Mrs. Flanders, coming round the rock and covering the whole space of the beach in a few seconds. “What has he got hold of ? Put it down, Jacob! Drop it this moment! Something horrid, I know. Why didn’t you stay with us? Naughty little boy! Now put it down. Now come along both of you,” and she swept round, holding Archer by one hand and fumbling for Jacob’s arm with the other. But he ducked down and picked up the sheep’s jaw, which was loose. Swinging her bag, clutching her parasol, holding Archer’s hand, and telling the story of the gunpowder explosion in which poor Mr. Curnow had lost his eye, Mrs. Flanders hurried up the steep lane, aware all the time in the depths of her mind of some buried discomfort.

There on the sand not far from the lovers lay the old sheep’s skull without its jaw. Clean, white, wind-swept, sand-rubbed, a more unpolluted piece of bone existed nowhere on the coast of Cornwall. The sea holly would grow through the eye-sockets; it would turn to powder, or some golfer, hitting his ball one fine day, would disperse a little dust—No, but not in lodgings, thought Mrs. Flanders. It’s a great experiment coming so far with young children. There’s no man to help with the perambulator. And Jacob is such a handful; so obstinate already. “Throw it away, dear, do,” she said, as they got into the road; but Jacob squirmed away from her; and the wind rising, she took out her bonnet-pin, looked at the sea, and stuck it in afresh. The wind was rising. The waves showed that uneasiness, like something alive, restive, expecting the whip, of waves before a storm. The fishing-boats were leaning to the water’s brim. A pale yellow light shot across the purple sea; and shut. The lighthouse was lit. “Come along,” said Betty Flanders. The sun blazed in their faces and gilded the great blackberries trembling out from the hedge which Archer tried to strip as they passed. “Don’t lag, boys. You’ve got nothing to change into,” said Betty, pulling them along, and looking with uneasy emotion at the earth displayed so luridly, with sudden sparks of light from greenhouses in gardens, with a sort of yellow and black mutability, against this blazing sunset, this astonishing agitation and vitality of colour, which stirred Betty Flanders and made her think of responsibility and danger. She gripped Archer’s hand. On she plodded up the hill. “What did I ask you to remember?” she said.

“I don’t know,” said Archer. “Well, I don’t know either,” said Betty, humorously and simply, and who shall deny that this blankness of mind, when combined with profusion, mother wit, old wives’ tales, haphazard ways, moments of astonishing daring, humour, and sentimentality—who shall deny that in these respects every woman is nicer than any man? Well, Betty Flanders, to begin with. She had her hand upon the garden gate. “The meat!” she exclaimed, striking the latch down. She had forgotten the meat. There was Rebecca at the window.

The bareness of Mrs. Pearce’s front room was fully displayed at ten o’clock at night when a powerful oil lamp stood on the middle of the table. The harsh light fell on the garden; cut straight across the lawn; lit up a child’s bucket and a purple aster and reached the hedge. Mrs. Flanders had left her sewing on the table. There were her large reels of white cotton and her steel spectacles; her needle-case; her brown wool wound round an old postcard. There were the bulrushes and the Strand magazines; and the linoleum sandy from the boys’ boots. A daddy-long-legs shot from corner to corner and hit the lamp globe. The wind blew straight dashes of rain across the window, which flashed silver as they passed through the light. A single leaf tapped hurriedly, persistently, upon the glass. There was a hurricane out at sea.

Jacob’s Room was the first book in Virginia Woolf’s unique, experimental style, making it an important text of early Modernism. Ostensibly, the story is about the life of Jacob Flanders, the title character, who is evoked purely by other characters’ perceptions and memories of him. Jacob remains absent throughout. Elegiac in tone, the work beautifully memorializes the longing and pain of a generation that lost so many of its promising young men to World War I.