The Hunting of the Snark 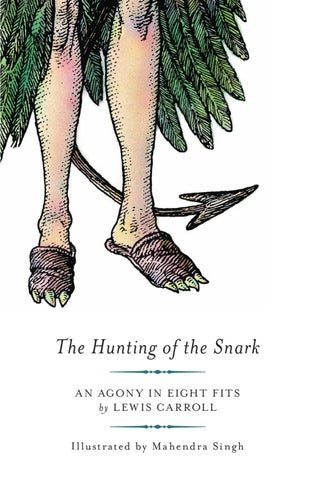 Inscribed to a dear Child: in memory of golden summer hours and whispers of a summer sea. Girt with a boyish garb for boyish task, Eager she wields her spade: yet loves as well Rest on a friendly knee, intent to ask The tale he loves to tell. Rude spirits of the seething outer strife, Unmeet to read her pure and simple spright, Deem, if you list, such hours a waste of life, Empty of all delight! Chat on, sweet Maid, and rescue from annoy Hearts that by wiser talk are unbeguiled. Ah, happy he who owns that tenderest joy, The heart-love of a child! Away, fond thoughts, and vex my soul no more! Work claims my wakeful nights, my busy days — Albeit bright memories of that sunlit shore Yet haunt my dreaming gaze!

With forks and hope and love for Yamini

Fig. 1 â&amp;#x20AC;&amp;#x201D; A visual explication of the portmanteau concept. Shown here is the

celebrated poet and author of this preface, Lewis Carroll, with a portmanteau of the Rev. Charles Lutwidge Dodgson, mathematics don at Christ Church College.

f — and the thing is wildly possible — the charge of writing

nonsense were ever brought against the author of this brief but instructive poem, it would be based, I feel convinced, on

the line (in Fit the Second)

“Then the bowsprit got mixed with the rudder sometimes.”

In view of this painful possibility, I will not (as I might) appeal

such a deed: I will not (as I might) point to the strong moral pur-

pose of this poem itself, to the arithmetical principles so cautiously inculcated in it, or to its noble teachings in Natural History — I will

take the more prosaic course of simply explaining how it happened.

The Bellman, who was almost morbidly sensitive about appear-

ances, used to have the bowsprit unshipped once or twice a week

to be revarnished, and it more than once happened, when the time

came for replacing it, that no one on board could remember which

end of the ship it belonged to. They knew it was not of the slightest use to appeal to the Bellman about it — he would only refer to his

Naval Code, and read out in pathetic tones Admiralty Instructions

which none of them had ever been able to understand — so it generally ended in its being fastened on, anyhow, across the rudder. The

helmsman* used to stand by with tears in his eyes; he knew it was all wrong, but alas! Rule 42 of the Code, “No one shall speak to the

*This office was usually undertaken by the Boots, who found in it a refuge from the

Baker’s constant complaints about the insufficient blacking of his three pairs of boots.

Man at the Helm,” had been completed by the Bellman himself with

the words “and the Man at the Helm shall speak to no one.” So remonstrance was impossible, and no steering could be done till the next

Jabberwock, let me take this opportunity of answering a question that has often been asked me, how to pronounce “slithy toves.” The

to rhyme with “groves.” Again, the first “o” in “borogoves” is pronounced like the “o” in “borrow.” I have heard people try to give it

the sound of the “o” in “worry.” Such is Human Perversity.

in that poem. Humpty-Dumpty’s theory, of two meanings packed

into one word like a portmanteau, seems to me the right explana-

For instance, take the two words “fuming” and “furious.” Make

up your mind that you will say both words, but leave it unsettled

which you will say first. Now open your mouth and speak. If your

thoughts incline ever so little towards “fuming,” you will say “fum-

ing-furious”; if they turn, by even a hair’s breadth, towards “furious,”

Supposing that, when Pistol uttered the well-known words —

“Under which king, Bezonian? Speak or die!”

Justice Shallow had felt certain that it was either William or

Richard, but had not been able to settle which, so that he could not

possibly say either name before the other, can it be doubted that, rather than die, he would have gasped out “Rilchiam!”

“Just the place for a Snark!” the Bellman cried, As he landed his crew with care; Supporting each man on the top of the tide By a finger entwined in his hair.

The crew was complete: it included a Boots — A maker of Bonnets and Hoods — A Barrister, brought to arrange their disputes — And a Broker, to value their goods.

A Billiard-marker, whose skill was immense, Might perhaps have won more than his share — But a Banker, engaged at enormous expense, Had the whole of their cash in his care. There was also a Beaver, that paced on the deck, Or would sit making lace in the bow: And had often (the Bellman said) saved them from wreck, Though none of the sailors knew how.

There was one who was famed for the number of things He forgot when he entered the ship: His umbrella, his watch, all his jewels and rings, And the clothes he had bought for the trip.

He had forty-two boxes, all carefully packed, With his name painted clearly on each: But, since he omitted to mention the fact, They were all left behind on the beach. The loss of his clothes hardly mattered, because He had seven coats on when he came, With three pairs of boots â&amp;#x20AC;&amp;#x201D; but the worst of it was, He had wholly forgotten his name.

He would answer to “Hi!” or to any loud cry, Such as “Fry me!” or “Fritter my wig!” To “What-you-may-call-um!” or “What-was-his-name!” But especially “Thing-um-a-jig!” While, for those who preferred a more forcible word, He had different names from these: His intimate friends called him “Candle-ends,” And his enemies “Toasted-cheese.”

“His form is ungainly — his intellect small —” (So the Bellman would often remark) “But his courage is perfect! And that, after all, Is the thing that one needs with a Snark.” He would joke with hyænas, returning their stare With an impudent wag of the head: And he once went a walk, paw-in-paw, with a bear, “Just to keep up its spirits,” he said.

He came as a Baker: but owned, when too late — And it drove the poor Bellman half-mad — He could only bake Bridecake — for which, I may state, No materials were to be had.

The last of the crew needs especial remark, Though he looked an incredible dunce: He had just one idea — but, that one being “Snark,” The good Bellman engaged him at once.

He came as a Butcher: but gravely declared, When the ship had been sailing a week, He could only kill Beavers. The Bellman looked scared, And was almost too frightened to speak: But at length he explained, in a tremulous tone, There was only one Beaver on board; And that was a tame one he had of his own, Whose death would be deeply deplored.

The Beaver, who happened to hear the remark, Protested, with tears in its eyes, That not even the rapture of hunting the Snark Could atone for that dismal surprise! It strongly advised that the Butcher should be Conveyed in a separate ship: But the Bellman declared that would never agree With the plans he had made for the trip: Navigation was always a difficult art, Though with only one ship and one bell: And he feared he must really decline, for his part, Undertaking another as well.

The Beaver’s best course was, no doubt, to procure A second-hand dagger-proof coat — So the Baker advised it — and next, to insure Its life in some Office of note: This the Banker suggested, and offered for hire (On moderate terms), or for sale, Two excellent Policies, one Against Fire, And one Against Damage From Hail.

Yet still, ever after that sorrowful day, Whenever the Butcher was by, The Beaver kept looking the opposite way, And appeared unaccountably shy.

A B o u t t h E Au t h o r Oxford University mathematics professor Charles Lutwidge Dodgson (1832 – 1898), under his pen name Lewis Carroll, created some of the most brilliant, original and uniquely inventive literature in the English language. He is most famous for three magical works: Alice’s Adventures in Wonderland, Through the Looking-Glass, and the witty, whimsical and ever-elusive The Hunting of the Snark. When pressed to explain the meaning of The Hunting of the Snark, Carroll invariably replied that he did not know. “I’m very much afraid I didn’t mean anything but nonsense!” he wrote in a letter to friends, “Still, you know, words mean more than we mean to express when we use them: so a whole book ought to mean a great deal more than the writer meant. So, whatever good meanings are in the book, I’m very glad to accept as the meaning of the book. The best I’ve seen is . . . that the whole book is an allegory on the search for happiness. I think that fits beautifully in many ways.”

A B ou t t h E A rt i st Mahendra Singh is an illustrator and longstanding Lewis Carroll aficionado. He is a member of the Lewis Carroll Society of North America and an editor for their journal, the Knight Letter. For Singh, creating the illustrations for The Hunting of the Snark “has been a labor of love — fitting Lewis Carroll into a proto-Surrealist straitjacket with matching Dada cufflinks.”

The Hunting of the Snark