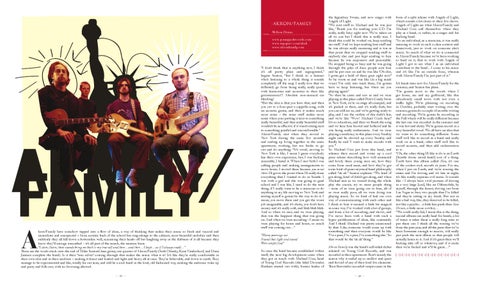 kron/Family have somehow tapped into a ﬂow of ideas, a way of thinking that makes their music so fresh and visceral and immediate and unexpected – from ecstatic back of the school bus sing-alongs to the calmest, most beautiful melodies and then suddenly they all fall down a bottomless well, screaming their heads oﬀ but laughing away at the daftness of it all because they know they’ll emerge unscathed - it’s all part of the search, the treasure hunt. “Listen, listen, these sounds bring me back to my true self and then…and then…I leapt…as if I always could…” These are the words stuck onto the end of Miles Seaton’s bass guitar, one quarter of Akron/Family (Seth Olinsky, Ryan Vanderhoof, and Dana Janssen complete the band). Is it their “true selves” coming through that makes the music what it is? It’s like they’re really comfortable in their own skin and in their medium – making it direct and loaded and light and heavy all at once. They’re believable, and down to earth. They manage to be experimental and like, totally far out man, and still be a rock band in the loud, old fashioned way, making the audience wake up and party and folk-out, with no frowning allowed. . . . 52 . . .

“I don’t think that is anything new, I think it’s all pretty plain and regurgitated,” begins Seaton, “but I think to a listener who’s listening to a whole thing it sounds completely oﬀ the map. I really love that we deﬁnitely go from being really, really quiet, with harmonies and acoustics to then like grrrrreeeeeeer!!! Absolute non-musical ear bleeding! “But the idea is that you have that, and then you cut to a four-part a cappella song, with an acoustic guitar, and then it makes much more sense - the noise stuﬀ makes more sense when your putting it next to something really beautiful; and that really beautiful stuﬀ wouldn’t be as eﬀective if it wasn’t sitting next to something painful and uncomfortable.” Akron/Family met when they moved to New York during the same few months and ending up living together in the same apartment, working, but too broke to go out and do anything: “It’s weird, moving to New York is like, I mean I guess everybody has their own experience, but, I was fucking miserable, I hated it. When I met Seth I was calling people and making arrangements to move home. I moved there because you move there. I’d got to the point where I’d really done everything that I wanted to do in Seattle. I was with a girl and she was going to grad school and I was like, I need to do the next thing, if I really want to be a musician or do anything in my life moving to New York and testing myself is gonna be the way to do it. I mean, you move there and you get the worst job imaginable, and it’s shitty, you don’t have money and it’s really cold, and blah blah blah. And so when we met, and we were playing, that was the happiest thing that was going on. And when we were recording - I mean we were playing for hours and hours, so much stuﬀ was coming out…” “Many years ago we Found that light and sound Were ample food” So once the band became established within itself, the next big development came when they got in touch with Michael Gira, head of Young God Records (the label Devendra Banhart started out with), former leader of

the legendary Swans, and now singer with Angels of Light. “We sent stuﬀ to Michael and he was just like, ‘Thank you for sending your CD. I’m really, really busy right now. We’ve taken on all we can but I think this is really nice. I think this could be worked on, keep sending me stuﬀ.’ And we kept sending him stuﬀ and he was always really nurturing and it was at that point that we stopped sending stuﬀ to anybody else and just kept sending to him because he was responsive and personable. He stopped being so busy and he was going through the piles of discs people sent him and he put ours on and he was like ‘Oh shit, I gotta get a hold of these guys right now!’ So he wrote us and was like (in a big man’s voice) ‘I’m only into track three, I’m gonna have to keep listening, but when are you playing again?’ “So then he came and saw us and we were playing in this place called Pete’s Candy Store in New York, we’re on stage all cramped, and it’s packed in there, and it’s really dark, but you can still see us, and we’re getting ready to play, and I see the outline of this dude’s hat, and we’re like ‘Wow! Michael Gira’s here!’ It’s so ridiculous, and then we ﬁnish the song and we hear him hootin’ and hollerin’ and he was being really enthusiastic. And we were playing a residency in this place every Sunday night and he showed up every Sunday and ﬁnally he said ‘I want to make records with you.’” So Michael Gira just loves this band, and releases their record and writes up a cool press release describing how well mannered and lovely these young men are, how they come from rural areas, and how they’ve got some kind of quasi-mystical band philosophy called “ak ak.” Seaton explains: “We kind of got along, kind of didn’t get along, and when Michael met us we weren’t doing the whole play the circuit, try to meet people thing - none of us were going out to bars, all of us were really poor, all we were doing was playing music. So we kind of had our own way of communicating with each other and I think to him it seemed a little bit magical in some way. I’ve worked with a lot of groups, and done a lot of recording, and shows, and I’ve never been with a band with such a hyper proliferation of ideas, like constantly. And I think Michael was pretty enamoured by that. Like, someone would come up with something and then everyone would be like ‘I’ve a part, I’ve a part, I’ve something else.’ So that would be the ‘ak ak’ thing.” Akron/Family was the band’s self-titled debut released on Young God Records, and was recorded in their apartment. That’s mainly the reason why it ended up so mellow and quiet and devoid of any of their loud live elements. Their ﬁrst studio recorded output came in the . . . 53 . . .

form of a split release with Angels of Light, which sounds a lot closer to their live shows. Angels of Light are what Akron/Family and Michael Gira call themselves when they play as a band, or rather, as a singer and his backing band. “As an individual, as a musician, it was really amazing to work in such a clear context and framework, just to work on someone else’s music. So much of what we do is connected to Akron/Family because we’ve been working so hard on it, that to work with Angels of Light I got to see what I as an individual contribute to the band…I come to his music and it’s like I’m an outside force, whereas with Akron/Family I’m just part of it.” It’s break time now for Akron/Family for the summer, and Seaton has plans. “I’m gonna move to the woods when I get home, me and my girlfriend, like this ridiculously small town with not even a traﬃc light. We’re planning on recording in October, probably start writing over the summer, gonna do a couple of months writing and recording. We’re gonna be recording in the Fall which will be really diﬀerent because the last one was recorded in the summer and it was hot and shitty. We’re gonna record in a very beautiful wood. We all have an idea that we want to do something diﬀerent. Some stuﬀ we’d like to record as a band and really work on as a band, other stuﬀ we’d like to record acoustic, and then add orchestration to it. “Oh, the other thing I’d like to do is an Earth [Seattle drone metal band] sort of a thing. Earth have this album called Hex, it’s one of the coolest rock records in years. For me, when I put on Earth, and we’re touring the states and I’m driving and it’s late at night, it’s like totally supreme evil music. It sounds like - I always have vivid pictures of driving in a very large [car], like an Oldsmobile, by myself, through the desert, driving out from Las Vegas to bury two people that I’ve killed and they’re sitting in my trunk. But not in like a bad way, like, they deserved to be killed, not like a psycho…a little less punk than Taxi Driver, a little more cowboy… “We could really fail, I mean this is the thing, second albums are really hard for bands, a lot of times it takes them a really long time to put them out. I think all the touring we’ve done the past year, and all the press that we’ve been fortunate enough to receive, will really just push the next album so that people will actually listen to it. And if it’s great then we’ll fucking take oﬀ or whatever, and if it sucks then we’re fucked and it’ll be great…!” {-}-{-}-{-}-{-}-{-}-{-}-{-}-{-}-{-}-{-} 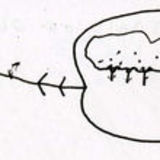