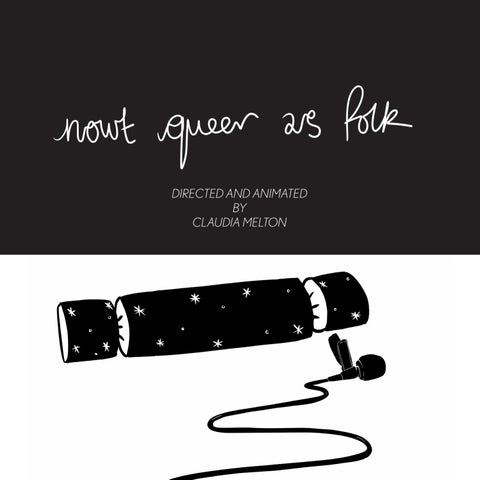 Mockumentary following a family over their Christmas Day, and a cameraman who is struggling to break through.

NOWT QUEER AS FOLK is an animation about being an outsider and being accepted - about creating connections and finding similarities between different groups of people. This animation is intended for all, aside from young children (though there is very little bad language etc and is generally family friendly). It is a 2D animation, animated through TV Paint and distributed via Vimeo and physical screenings. This is an animation for those who have come into a new space feeling like an outsider, as well as those who may have been afraid to let outsiders in out of a fear of judgement. It is an animation that quietly shows the northern value of ‘getting on with it’ - of bonds being created in more turbulent moments, and of recognizing that everyone is a little bit strange.

NOWT QUEER AS FOLK is an animated ‘mockumentary’ style short that follows an outsider cameraman and the stand-offish family he is documenting over Christmas Day. It explores how outsiders feel as they struggle to connect with established groups – as well as exploring the reasons why those groups may feel wary of outsiders – such as feelings of judgement and misconceptions from the outside. The story covers what a lack of communication between groups and outsiders can do, and how bonds can be made. It shows that, by having an understanding of one another – the understanding that all people are strange in their behaviours, connections can be made.

This project was initially born from the feelings of ‘homesickness’ that I felt as I came to my third year away from home. I was born in a northern seaside town and have always lived an hour away from that place; I only left the north to go on family holidays, and rarely got the chance to see what life/people were like in the south of England before I moved for university. I did initially want to tackle the North/South divide, as it is something that I am aware of not only culturally but also economically, since it is no secret that much more money is pumped into southern counties and London especially, in contrast to many places in the North that can seem forgotten. On the other hand, the political climate is already in a place of divide; I didn’t want to produce work that might make people even more divisive, as that is definitely not my own belief. I preferred to produce something that encourages unification from people’s differences. As it is a self-directed project, I wanted to produce something that would serve as a ‘love letter’ to the place that I am from. Something that celebrates Northern culture and my identity but doesn’t separate me or create divisions. It was for this reason that I decided to do it using real, recorded footage of my own family, with their native northern accents and attitudes, to frame a narrative around.

The narrative of my short was not all there at the beginning of production but rather born out of the process. I originally intended it to be a story about my own family, about their Christmas’, about northerners; but truthfully I was unsure that I knew what story I wanted to tell. However, an interesting dynamic came through with the introduction of a new, fictional character – the cameraman – he soon became the object of my animation and introduced a narrative of outsiders and acceptance. The narrative lies within a cameraman who is attempting to connect with a family on Christmas Day, and repeatedly finds himself shut out. The family are misbehaving, concerned that an outsider may judge their peculiar behaviour and draw judgements. A lack of communication and understanding between the cameraman and the family leads to tension, and eventually an altercation, that leaves the cameraman on the outside. However, this altercation – the clashing of heads – shows the characters the truth; that there truly is ‘nowt so queer as folk’, and they are more similar than they first believed. They share a connection, and he is invited in to toast with the family, coming out from behind the camera and removing that degree of separation. I think that this story is important in this current climate because we can feel extremely divided by growing tensions. There are certainly more efforts from political forces to divide us from one another based on our differences. More and more I feel that we are being told that others’ behaviours are strange, that we are the normal ones (whoever we is), yet a modern society should be embracing and accepting of differences, and finding this common ground. 9

OUTLINE A family arrive at the Grandmother’s home for Christmas Day, where they have agreed to be filmed to contribute to a documentary about Christmas and UK Culture. They are uneasy with the introduction of the cameras and the cameraman struggles to connect with them - remaining an outsider to the family and unable to capture them properly. Tensions rise with the family who are misbehaving, unable to behave for the cameras - and the cameraman’s presence soon causes a spat that leaves the mood sour. The camera man seems to give up - the family are laughing in the next room, but he remains outside the door, feeling unaccepted and unable to join. Helen, who previously had a spat with the cameraman returns to him, offering out a peace offering - in their conflict, the cameraman shows that he too is as strange as the family ‘nowt so queer as folk’ - and a bond is created. There is an understanding between them that ‘all people are a little strange’. PLOTLINE The family arrive at their Grandmother’s home on Christmas Day. Sarah, the matriarch of the family, insists that the rest of the family stay on their best behaviour for the cameras. They are welcomed in and the family greet one another; the cameraman is shut out for the first time, deemed an outsider. The family struggle to manage with being filmed; Sarah and Becky prefer to have their conversations in private - Helen hides on the stairs - William sits upstairs on the computer and does not enjoy being filmed. At dinner, the family behave awkwardly or inappropriately around the camera - whilst some avoid the camera at all costs, others such as Paul grab the camera and talk directly into it, directly ignoring the ‘fly on the wall’ concept. The cameraman’s behaviour as an outsider leads to Jen dropping her food all over herself, which triggers a reaction from the family (some are amused; others are angry). Helen stands and intervenes with the cameraman, stating that she never thought it was a good idea for him to be there in the first place. It cuts to later, when the cameraman is sitting alone outside the room where the family are laughing and enjoying themselves without the inclusion of the camera - he films Helen who is smoking outside, thinking things over. She soon disappears, and re-appears a moment later with a drink for the cameraman, inviting him in. He puts the camera down and joins the family - no longer an outsider.

My intention with the onesheet was for it to be simple, and not give too much away content-wise. In the final product, I went with a very simple visual of the microphone beside a Christmas cracker. This would signal to the viewer that the film is likely to be Christmas related, and perhaps the lapel microphone signals that perhaps the piece is documentary based.

SARAH - Final facial/bust design and turnaround. Characterised by her dark, short hair, styled and bouncy. Wearing large hoop earrings that move when she walks. Multiple freckles, that shows her family resemblance to Liv, who has them too. She wears a long cardigan, and platform wedges.

SIMON - Final facial/bust design and turnaround. Characterised by simple, relaxed features. He too has dark hair, and squared off features. He wears a relaxed t-shirt and jeans, and is often pictured with his hands in his pockets.

CLAUD- Final facial/bust design and turnaround. Characterised by dark dyed strands of hair framing the face and heart shaped earrings. Dressed in a simple layered outfit that is reflective of real life. The earrings provide a secondary action movement. Generally presenting a relaxed and casual appearance, which is reflected in this characterâ&#x20AC;&#x2122;s movements.

LIV- Final facial/bust design and turnaround. Characterised by light, shoulder length hair and most noticeably freckles, which are shared with Sarah. Being sisters, Claud and Liv show some similarities in features. Liv is dressed slightly more formal than Claud and Liv. 19

At the heart of this animation is the sound that runs behind it. All the sound footage within Nowt Queer As Folk is genuine, recorded over my own familyâ&#x20AC;&#x2122;s Christmas Day. It was then produced and cut down in Adobe Audition, taking advantage of the various sound effects and level manipulators in order to shift the audio from found footage, to a narrative that can be followed.

In order to ensure my short was complete before the original deadline, I produced several production schedules and shot lists that would keep me on track. I narrowed the shot list down to the number of frames and seconds, so producing animatics for each scene was simple.

Stills from TV Paint (Above) & After Effects (Right) The majority of animation produced for this short was created inside of TV Paint. This intuitive software was ideal for this project, as it has a focus on 2D frame-by-frame animation, and allows for both point-to-point and straight ahead methods. 32

Still from After Effects The sections of animation were exported out of TV Paint as png sequences, in order to preserve the quality of the frames and allow for changes to be made further down the line. Following this, the frames were imported into After Effects and put together into sequence, incorporating several of the available effects within the software (such as time stretch, opacity, and path animation capabilities). The finalised animation sequence can then be combined with audio and spot sounds within Adobe Premier. 33 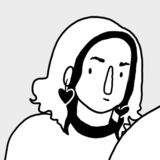