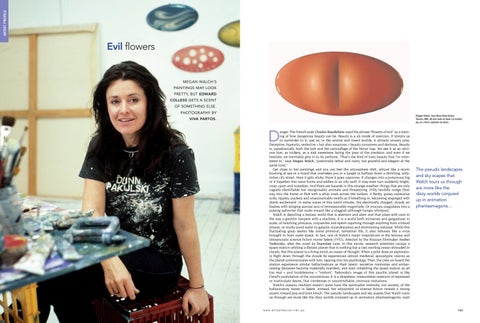 anger. The French poet Charles Baudelaire used the phrase “flowers of evil” as a warning of how dangerous beauty can be. Beauty is a sly mode of coercion. It tempts us to surrender to it; just as, in the animal and insect worlds, it attracts unwary prey. Deceptive, hypnotic, seductive – but also voracious – beauty consumes and destroys. Beauty is, paradoxically, both the bait and the camouflage of the Venus trap. We see it as an obvious lure, as trickery, as a sick sweetness lacing the jaws of the predator; and even if we hesitate, we inevitably give in to its perfume. “That’s the kind of toxic beauty that I’m interested in,” says Megan Walch, “potentially lethal and nasty, but graceful and elegant at the same time.” Get close to her paintings and you can feel the atmosphere shift, almost like a storm looming at sea or a mood that overtakes you in a jungle or halfway down a dimming, unfamiliar city street. Here it gets sticky; there it goes vaporous. It changes into a poisonous fog or it liquefies into wave fronts and eddies in an oily swill. It may even turn suddenly bright, crisp, open and noiseless. And there are hazards in this strange weather: things that are only vaguely identifiable but recognisably animate and threatening. Frilly tendrils nudge their way into the frame or flick with a whip crack across the surface. A fleshy, gooey substance coils, ripples, puckers and unaccountably swells as if breathing in, becoming engorged with dumb excitement. In some zones of this weird climate, the electrically charged, cloudy air flashes with stinging auroral arcs of immeasurable magnitude. Or mucous coagulates into a pulsing sphincter that sucks inward like a sluggish although hungry whirlpool. Walch is depicting a fantasy world that is aberrant and alien and that plays with ours in the way a gremlin tampers with a machine. It is a world both miniature and gargantuan in scale; of twitching protozoa, corpuscles and sperm squirting through anything from a blood stream, or murky pond water to galactic incandescence and shimmering nebulae. While this fluctuating goop seems like some primeval, terrestrial life, it also behaves like a virus brought in from outer space. In fact, one of Walch’s major inspirations is the famous and idiosyncratic science fiction movie Solaris (1972), directed by the Russian filmmaker Andrei Tarkovsky, after the novel by Stanislaw Lem. In this movie, research scientists occupy a space station orbiting a distant planet that is nothing but a vast swirling ocean shrouded in clouds. But this planet is a living mind; an ocean of thought. When a pilot does an exploratory flight down through the clouds he experiences almost medieval, apocalyptic visions as the planet communicates with him, tapping into his psychology. Then, the crew on board the station experience similar hallucinations as their latent, secretive memories and embarrassing fantasies become materially manifest, and start inhabiting the space station as all too real – and troublesome – “visitors”. Tarkovsky’s image of this psychic planet is like Freud’s postulation of the unconscious. It is a shapeless, measureless reservoir of repressed or inarticulate desire, that condenses in uncontrollable, ominous visitations. Walch’s oceanic medium doesn’t quite have the spiritualist intensity, nor anxiety, of the hallucinatory states in Solaris. Instead, her enjoyment of science fiction reveals a strong accent toward pop and even kitsch. The pseudo landscapes and sky scapes that Walch tours us through are more like the dizzy worlds conjured up in animation phantasmagoria, such

as the spooky Lilliputian ecology of René Laloux’s 1973 Fantastic Planet, and the psychedelic Pepperland in George Dunning’s Yellow Submarine of 1968. There is, too, the sort of cartoonlike wonderland that a movie like Richard Fleischer’s Fantastic Voyage (1966) immerses us in, when a medical team – shrunk to microscopic size – are injected into a human body, and (in another 60s pop masterpiece) the lava-lamp whorls of space travel in Roger Vadim’s Barbarella. All this is to say that there is a frivolous kind of fantasy here, taking us into the Bermuda Triangle or Toon-town rather than the sombre and fathomless emotional drama of the planet Solaris. Walch’s fantasia is where you might meet the Cat in the Hat. Not that this is just fun and games. The menace in this place is frivolous – it is a zone of scary monsters, as if from Monsters Inc – but the sense of peril is convincing. The dangers here are from the contaminating effects of mutation and anamorphosis. It is a place inducing nausea and bleariness along with excitement and mania. And it all started in toon-town. Toon-town was Hobart, where Megan Walch began her studies in visual art taking photographs of feral chameleon human bodies: naked and brightly painted crystalline, mineralised or faux scaly flesh camouflaged in Tasmanian landscapes, flesh that looked like the glossy extraterrestrial make-up used in the original Star Trek TV series. It was exuberantly kitsch, but Walch’s undergraduate photography was a laboratory of special effects for the kind of fantasy figures that appeared in her first major exhibition of paintings, at Dick Bett Gallery in Hobart in 1994. In these paintings maniacally animated creatures skidded and danced on huge spinning disks, resembling vinyl records flung into outer space like frisbees or computer hard-drives leaping out of their housings. While the “loony toon” style suggested the sort of anarchic imagination of Tex Avery or Chuck Jones, the zippy graphic mode of these early works was, Walch says, surprisingly derived from restored Italian Renaissance and Baroque painting she had seen while travelling in the two previous years. “While going through Europe in 1992,” she recounts, “I spent three months in Venice, where I had an internship at the Guggenheim Museum … guarding rooms, doing front of house … it let me look at a lot of art. Many of the frescoes in Venice, Florence and Rome had been cleaned; and their luminosity and even gaudy colour amazed me. I saw the cleaned up Sistine Chapel, and the decorative room of giants by Guilio Romano in Mantua. I realised I wanted to be a painter, and to paint with the juicy fantasy that was in these fresh, bright images.” It was with the work from this show that Walch scored one of the prestigious Samstag Scholarships, for two years of postgraduate study at the Art Institute in San Francisco. Topographically similar to Hobart, but hugely magnified in scale, San Francisco offered Walch an urbanised and smoggy version of her hometown. “My work became less cartoonlike,” she says, “more abstract, optical. I remember that Californian light and space being filtered and even poisoned by smog. And I started to use grids and multiple motifs.” Halfway through her Masters degree, the Art Institute gave Walch a scholarship to the Skowhegan School of Painting and Sculpture in Maine, to attend a nine week master class. Skowhegan is like a country retreat, but offers intense and rigorous tutoring from artists such as Gary Hill, Vito Acconci, Nan Goldin and Jessica Stockholder. Little wonder that, after this, Walch decided she would stay in the US; and, after getting her degree, she moved to New York with the assistance of a month residency from the Marie Walsh Sharpe Art

“I realised I wanted to be a painter, and to paint with the juicy fantasy that was in these fresh, bright images.”

Foundation Space Program, in its Manhattan studio. Walch ended up staying in New York for almost three years, working as an assistant to the plein air painter of urban wasteland, Rackstraw Downes, for much of that time, and shifting over to a studio in Brooklyn. “The work became even more optical, but especially blurry and aqueous,” recalls Walch. “I was working wet on wet, blending the colours with big 14 inch wide badger paint brushes sweeping across the canvas. These grounds were like smog. And I needed to populate that smoggy world. That’s what New York did for me. That’s when these anarchic, flying ribbon-like things came into the work, and little characters wearing gas masks.” Walch’s work, when she left the US in mid 2000 and brought it back for the Primavera show at Sydney’s Museum of Contemporary Art later that year, had a new kinetic and playful effervescence. Filaments of ejaculate seemed to collide and spin manically in vortices, reminiscent of the extravagantly graphic spurts of body fluids derived from manga imagery and used by the Japanese artist Takashi Murakami in his celebrated “superflat”, pop idiom. “These works were about the fantasy in American culture of self-destruction,” Walch says, “but they led me into the Asian supermodern, superflat experience.” And so Walch went to Taipei in 2002, for three months in the Australia Council studio; again drawn toward high density, smog-ridden urban experiences. “Taiwan is a cyber society,” she states, “but with a long historical background. Its culture is deeply Chinese, but it is a modern Western and technological culture too. A hybrid of low tech and high tech, of Buddhism and Capitalism.” In this mix of commercial vulgarity, urban pace, political competition and distant heritage, Walch was excited by the way in which the Chinese calligraphic tradition had been appropriated into neon and corporate ensigns. She adopted some of these calligraphic motifs as filigree forms, turning them into a type of iridescent, flowery or fern-like Chinoiserie. In Taipei these frilly motifs were applied to small lozenge shaped decorative panels, embedded in resin like elegant and almost dainty surfboard decals or tattoo designs. But in the most recent paintings, made back in Melbourne, these flowers are acquiring a more boisterous and mischievous character. Carnivalesque plant forms whip about in the air, forming nervous tentacular arabesques. Prancing with deliberately infantile, comically obscene sexual vigour, these alien flowers pose, poke and prod themselves in an orgy of self-excitement and self-gratification. One even seems to take advantage of itself, twisting in a sort of pornographic contrapposto and puffing a cloud of contagion-carrying spores through its own orifice … but into thin air. These creatures are sexual jesters, not unlike Dr Seuss’s Cat in the Hat. And like Dr Seuss’s demonically energetic monsters, Walch’s grotesques make a mockery of self-control, of adult responsibility and sense. They invite you to play with them. But you do so at your ■ own risk.

Megan Walch is showing at Helen Maxwell Gallery, Canberra until 4 July 2004 and she will be featuring new work with Nellie Castan Gallery at the Melbourne Art Fair from 29 September to 3 October 2004. 122