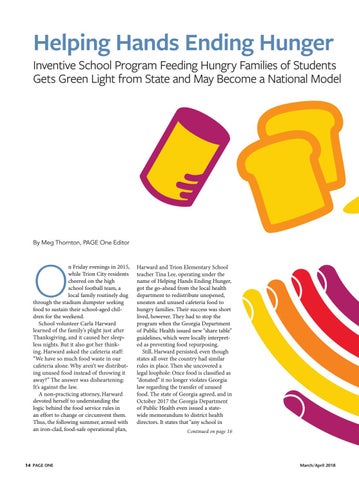 By Meg Thornton, PAGE One Editor

n Friday evenings in 2015, while Trion City residents cheered on the high school football team, a local family routinely dug through the stadium dumpster seeking food to sustain their school-aged children for the weekend. School volunteer Carla Harward learned of the family’s plight just after Thanksgiving, and it caused her sleepless nights. But it also got her thinking. Harward asked the cafeteria staff: “We have so much food waste in our cafeteria alone. Why aren’t we distributing unused food instead of throwing it away?” The answer was disheartening: It’s against the law. A non-practicing attorney, Harward devoted herself to understanding the logic behind the food service rules in an effort to change or circumvent them. Thus, the following summer, armed with an iron-clad, food-safe operational plan,

Harward and Trion Elementary School teacher Tina Lee, operating under the name of Helping Hands Ending Hunger, got the go-ahead from the local health department to redistribute unopened, uneaten and unused cafeteria food to hungry families. Their success was short lived, however. They had to stop the program when the Georgia Department of Public Health issued new “share table” guidelines, which were locally interpreted as preventing food repurposing. Still, Harward persisted, even though states all over the country had similar rules in place. Then she uncovered a legal loophole: Once food is classified as “donated” it no longer violates Georgia law regarding the transfer of unused food. The state of Georgia agreed, and in October 2017 the Georgia Department of Public Health even issued a statewide memorandum to district health directors. It states that “any school in Continued on page 16 PAGE One magazine, Georgia’s premier journal for educators, highlights the innovative work of quality educators across Georgia and covers si...

PAGE One magazine, Georgia’s premier journal for educators, highlights the innovative work of quality educators across Georgia and covers si...