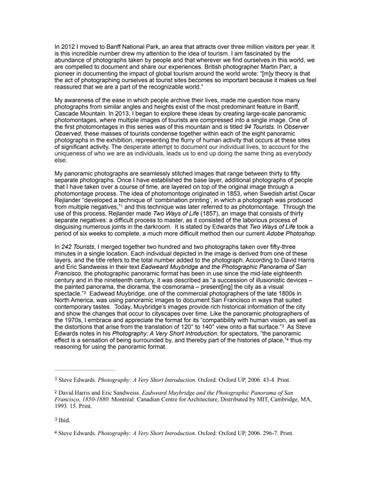 In 2012 I moved to Banff National Park, an area that attracts over three million visitors per year. It is this incredible number drew my attention to the idea of tourism. I am fascinated by the abundance of photographs taken by people and that wherever we find ourselves in this world, we are compelled to document and share our experiences. British photographer Martin Parr, a pioneer in documenting the impact of global tourism around the world wrote: “[m]y theory is that the act of photographing ourselves at tourist sites becomes so important because it makes us feel reassured that we are a part of the recognizable world.” My awareness of the ease in which people archive their lives, made me question how many photographs from similar angles and heights exist of the most predominant feature in Banff, Cascade Mountain. In 2013, I began to explore these ideas by creating large-scale panoramic photomontages, where multiple images of tourists are compressed into a single image. One of the first photomontages in this series was of this mountain and is titled 94 Tourists. In Observer Observed, these masses of tourists condense together within each of the eight panoramic photographs in the exhibition, representing the flurry of human activity that occurs at these sites of significant activity. The desperate attempt to document our individual lives, to account for the uniqueness of who we are as individuals, leads us to end up doing the same thing as everybody else. My panoramic photographs are seamlessly stitched images that range between thirty to fifty separate photographs. Once I have established the base layer, additional photographs of people that I have taken over a course of time, are layered on top of the original image through a photomontage process. The idea of photomontoge originated in 1853, when Swedish artist Oscar Rejlander “developed a technique of ‘combination printing’, in which a photograph was produced from multiple negatives,”1 and this technique was later referred to as photomontage. Through the use of this process, Rejlander made Two Ways of Life (1857), an image that consists of thirty separate negatives: a difficult process to master, as it consisted of the laborious process of disguising numerous joints in the darkroom. It is stated by Edwards that Two Ways of Life took a period of six weeks to complete, a much more difficult method then our current Adobe Photoshop. In 242 Tourists, I merged together two hundred and two photographs taken over fifty-three minutes in a single location. Each individual depicted in the image is derived from one of these layers, and the title refers to the total number added to the photograph. According to David Harris and Eric Sandweiss in their text Eadweard Muybridge and the Photographic Panorama of San Francisco, the photographic panoramic format has been in use since the mid-late eighteenth century and in the nineteenth century, it was described as “a succession of illusionistic devices – the painted panorama, the diorama, the cosmorama – present[ing] the city as a visual spectacle.”2 Eadwead Muybridge, one of the commercial photographers of the late 1800s in North America, was using panoramic images to document San Francisco in ways that suited contemporary tastes. Today, Muybridge’s images provide rich historical information of the city and show the changes that occur to cityscapes over time. Like the panoramic photographers of the 1970s, I embrace and appreciate the format for its “compatibility with human vision, as well as the distortions that arise from the translation of 120° to 140° view onto a flat surface.”3 As Steve Edwards notes in his Photography: A Very Short Introduction, for spectators, “the panoramic effect is a sensation of being surrounded by, and thereby part of the histories of place,”4 thus my reasoning for using the panoramic format.

In September of 2014, upon expanding the project to Iceland where I attended the Listhús í Fjallabyggð residency program with support from the Saskatchewan Arts Board’s independent artists grant program, my focus expanded to the travelers there, creating a thought-provoking comparison to the photographs taken in Banff. In 2008 Iceland experienced a major economic and political financial crisis and because of this, tourism has become a much more significant part of their national economy. In 2014, the population of Iceland was 300,000, yet there were over a million tourists that traveled throughout the country annually. This is in comparison to the three million people who pass through Banff National Park’s gates every year. Although initially a blessing to the country, according to the Wall Street Journal, “[t]he scale of the tourism explosion has caught the government unprepared, leaving infrastructure strained and outnumbered Icelanders complaining about scarce housing, rising rental prices and roadside litter.”5 This phenomenon is not unique to Iceland, and discussion around it has become a more frequent topic of conversation, the world over. By emphasizing the volume of people who visit and document these picturesque places, I present the tourists interacting with each other and the world around them through the use of their technology, with the inclusion of myself taking a “selfie” into each image. In The Nature Principle: Reconnecting with Life in a virtual Age, Richard Louv states that “in an age of rapid environmental, economic, and social transformation, the future will belong to the nature smart – those individuals, families, business, and political leaders who develop a deeper understanding of nature, and who balance the virtual with the real.”6 While observing tourists documenting the landscapes around them, I wonder if this is the new generation of “nature smart” people. While it may initially appear that they only have a superficial relationship with these locations, as they are all taking the same standard snapshots of easily accessible, scenic viewpoints, it is their mere presence that becomes significant. As portions of society have lost their connection with the natural world, this increased interest in the outdoors and parks is good for our overall psychological and physical health. Similarly to Louv, I also believe that “[w]hat’s different now is not the presence of technology, but the pace of change – the rapacity of the introduction of new media and adoption of new electronic devices,”7 and although this change is occurring, as a society we can balance our technological selves and become “nature smart” through our constant desire to have a close connection to the natural world. Over the span of working on this series, I have witnessed this rapacity, as social media is changing the tourism industry and our interaction with the natural world daily. On platforms such as Instagram, Geotagging technology shows us where a photograph was taken, no matter the destination. While there is nothing wrong with seeing a beautiful place on the Internet and deciding to go there, who is become the ultimate gatekeeper, unless it is on private land. Although not my original intent, the photomontages do accentuate my ever-increasing anxiety felt while visiting these ever increasing, overcrowded tourist locations myself. In Observer Observed, through the photomontage process, I seek to engender in my viewers a similar angst to my own feelings about the current state of tourism. Compressed together, these people are all equally enthusiastic to be documenting the same picturesque landscapes, regardless of the quality of images taken or on what social platforms they will ultimately be displayed. In my analysis of this digital revolution we currently find ourselves in, I emphasize the number of visitors that document these places, and the euphoria it brings becomes quite apparent. Thus, the tourists reflect individual attempts to seek out and become part of the recognizable world through the use of their technology, yet highlights the lack of uniqueness of each individual’s image. 5 Adam, Nina. “Tourism Boom Bogs Down Iceland.” The Wall Street Journal, 21 Aug. 2017. 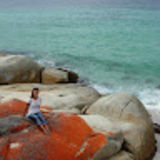