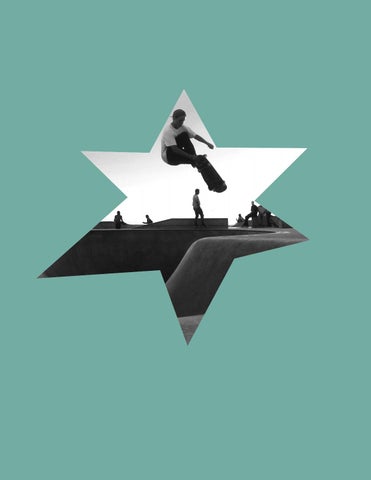 E T A by Megan Clark

Skateboarding, the activity that has been scoffed at, praised, and exploited. What once used to be considered the sport for social rejects went on to grow to be a multi-billion dollar industry. A culture that prides itself on individuality, drive, and intrinsic values. With such a strong emphasis on self-expression, there are countless ways a skater can present themselves visually. However, there are reoccurring themes that have grown to be accepted within the skateboarding culture.

evolution of skating Skateboarding originally evolved from surfing. Made popular in southern California in 1958, it was referred to as “sidewalk surfing”, because of the massive overlap in surfers and boarders. In its start, skateboarders would make their own boards, which can be credited towards its dangerous reputation. It wasn’t until 1972 that Frank Nasworthy invented urethane wheels, which completely changed boarding. Skating popularity took off, as it was a fairly accessible sport. This increased even more so after a group who

called themselves the Z-Boys, began skating in empty pools. The Z-Boys, also known as Dogtown-Boys, was a group made up of lower-middle class teenagers from Santa Monica. They went on to be sponsored by a local surf shop, and a select few went on to skate professionally. Their innovation of skating in empty pools gave the image of what skating is today. Being unique, dedicated to the sport, and maybe a little bit devious. Skating on the smooth walls of the pool allowed more opportunity to play whereas skating on bumpy roads did not.

from basic to advanced and t s

t u o h g u o r h t skaters history There are many memorable names from the skating community, one of which being Tony Hawk. He is the public face of skateboarding, which is more or less an accurate depiction of skating itself. He embraces the love for the sport, and uses it as fuel to propel him forward in his career. Even at age 51 he can still be found on a skateboard. He found his career from his experimentation with launching himself into the air from the edge of pool walls. Hawk’s raw talent and daring tricks gathered attention of many skaters, and eventually from those outside the skating community. He gives credit to his skating by “[sticking] with it in the 90s when everyone else forgot about it”. Hawk went on to win over 70 competitions throughout

his 17-year career as a professional skateboarder. He was the first to land the 900, a trick with 2 1/2 rotations midair. However rich and famous he may be, he still remains to be the perfect representative for skateboarding. Not through his many successes, but through his demeanor. Hawk can be described as humble and down-to-earth. Being authentic to skateboarding is all about how you carry yourself. Skating is a culture that thrives on comradery and encouragement. True skaters find inspiration in others success, rather than viewing it as a competition to continuously best each other.

You and I bounced tricks off of each other. I remember you watched me do an airwalk and then you were like oh I gotta learn that and then you go and And likewise I would do it on the flat. do a trick and then see you do it in vert, like fingerflips and I would *conversation just like… like oh my god, he’s doing that in between tony hawk and rodney pools and I’m having mullen on RIDE problems on the Channel ground... and it would be so inspiring for me.

appeared in all 52 X-Games, winning 26 medals. Successfully landed a fifty-fifty into the Grand Canyon, and was the first to land a fakie 900.

considered to have made skateboarding a sport. invented backside flip, 260 flip, one footed ollie among others.

skate values In a culture where individuals strive to be completely unique, what determines authenticity? Being a true skateboarder doesnâ&amp;#x20AC;&amp;#x2122;t rely solely on your clothes or the terminology you throw around. It lies in how you define success within yourself. Skateboarding evolved from an activity with no rigid guidelines or referees. It flourished by pushing boundaries and testing limits. Whether that was how you made your skateboard, where you would skate, or the tricks you would nail as you skated. Having a competitive nature outs you as not genuine. Skating is not meant to be a comparative environment, but one where individuals can inspire each other and build

off of each others successes. Skaters are also extremely critical of businesses attempting to gain profit off of the skater stereotype. One of many is Vogue, who ran a piece connecting fashion and skating. Authentic skaters could see the lack of depth within the articles, aiming to diminish skating to a few simple brand names. People took to the internet, some voicing their harsh opinions under anonymous screen names. One in particular wrote, â&amp;#x20AC;&amp;#x153;I think Vogue is fucking dumb and knows nothing about skating, and their approach was ignorant and stupid.â&amp;#x20AC;?

women in skating Although skaters are known to rebel against societal rules and guidelines, that typically doesn’t apply to the patriarchy. As a male dominated culture, it can be difficult for women skaters to find their place. A group known for its companionship towards outcasts, tend to reject women who veer from the norm. Girls who skate are immediately categorized as “groupies” or “skate bettys” rather than authentic

participants. The men assume that women are only around to meet cool skater guys. In order to combat this, female skaters either over-sexualize themselves to be accepted or mask their femininity to be labeled as “one of the guys”.

A derogatory term for women who hang around male skaters.

Means “cool”, or “awesome”. Basically, the opposite of the dictionary definition.

deck out your deck

The “deck” refers to the wood portion of a skateboard. It is common for skaters to individualize their boards, making it one of a kind. This can be done through hand selected stickers, painting, or any kind of customization to make it their own. When skating became more commonplace, companies began mass producing boards. They advertise towards the skater archetype, an edgy teen who isn’t afraid of a little trouble or getting a few bumps and bruises. However, pigeonholing all skaters to fit this one description contradicts the skater mindset. The entire context of skating is taking pride in one’s individuality. These mass produced products make it hard for skaters to express themselves through their boards. This is why you will see a lot of skaters take store-bought boards and make it their own. It also makes it a lot easier to not get boards mixed up at the park!

Another way to say excited. “I just landed that kickflip, I’m so stoked.”

Someone who pretends to be a skater but really isn’t.

Short for skateboard. Could also be used as a verb.

brands: sell-out or not When it comes to skating brands, a true skater can tell what is authentic or not. For starters, skaters do not dress head to toe in name brand gear. It will usually be a mix of other items they have and like, possibly paired with a shirt that has a brand name on the front. Knowing the brands that are accepted within skate culture is the hard part. Skaters appreciate consistency and loyalty. This is why they will stand by their original skating brands. Itâ&amp;#x20AC;&amp;#x2122;s unlikely that an authentic skater will shop at chain stores such as Zumiez or PacSun. Their clothing might look on brand, but in reality, theyâ&amp;#x20AC;&amp;#x2122;re not good for skateboarding. Thrasher is an original skating brand, although it has recently become an extremely trendy name. People will wear Thrasher-labeled gear, without knowing that they once solely catered to skaters. Thrasher is still a brand that is accepted by skaters, because of its longevity. Another brand that is common in mainstream culture while

still worn by skaters is Vans. This brand is unique because of its roots. It was originally created to make shoes specific for skateboarding. It now has grown to be a widely recognized name, selling to multiple demographics as well as skaters. Skating is all about taking one thing and customizing it to make it your own. Vans used this knowledge and made it possible for skaters to design their own shoes, which became a huge hit. They would also sponsor professional skaters and have them create their own limited edition designs, truly encapsulating skate culture.

skater tip! be wary of shops that also sell other sport apparel like bmx or surfing. stick to wearing the skate stuff!

skaters, at a glance (..kinda)

Though you cannot determine who is an authentic skater by mere appearance, there are certain visual indicators that may point towards either skater or poser. For instance, how they carry their boards. An experienced skater typically holds their board under their arm, with the wheels facing out. This is usually how older skaters will carry their boards. Although, some new skaters will use what is called the mall grab, which is holding the board

from one end with grip on the outside of the wheels. Other visual indicators can range from the brands they wear to the quality of their clothes. Overdoing the brand name apparel is a red flag of a nonskater. Also having clean, new clothes can indicate they have never skated in them. Skating involves a lot of falling and

scrapes, which will rip and tatter clothing. This is why you will see skaters wearing pants made from thicker materials, such as denim or canvas. Some skaters also prefer looser fitting clothes so they can move in them more easily. For shoes, there are two main requirements to deem good for skateboarding. They need to be flexible with a flat sole. The shoes should especially be worn down, as this is a skaters main impact point. Skaters will get what are called “ollie holes” in the sides of their shoes from, as the name indicates, doing ollies on their boards. Skaters are willing to spend more money for high quality boards and shoes, as these get worn out the most. You will also see skaters knot their shoes under the tongue so that they don’t need to keep on tying and untying them. It also keeps the shoelace bow out of the way, so there’s less chance of tripping!

This is a project I created for my Design Degree Project class. I was instructed to choose a subculture that I was not a member of and research what that culture consists of. I decided to create a magazine layout to illustrate the inner workings of skateboarding culture.