Objects That Talk! | An Interview by: Alex Bloom with Pablo Fidel Clairmont Salvatierra 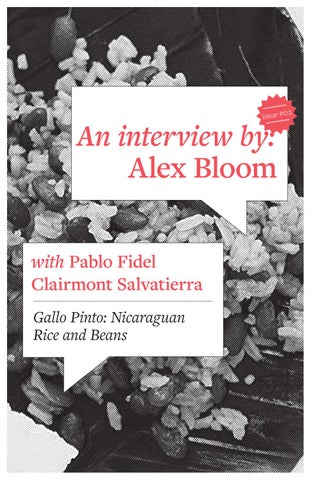 J Sunday, March 15, 2020 · Alex Bloom and Pablo Fidel Calirmont Salvatierra alex: What is the object that you chose? pablo: So I was thinking about it and I think Gallo Pinto which is a dish that my Mum makes a lot. I think it’s interesting because my family splits the cooking — and I mean they’re divorced now so obviously [my parents] do their own cooking — but my Dad would also make this even though it’s a Nicaraguan dish. I remember growing up they had a spanish name which was different, but I just remember my family talking about how in Nicaragua people have Gallo Pinto for every single meal — it’s rice and beans, so pretty straightforward — but I went to dinner with my family in the last couple months actually and both my parents were there and my Mum was talking about how when she came to Canada she was like ‘I only want to date someone who is interested in my culture and can speak Spanish,’ and she wasn’t sure she was going to find anybody like that but my Dad happened to have travelled through Latin America very extensively for a couple months and he spoke Spanish. Growing up he was very into representing that culture, and making those foods was a sign of that for me. So I never really felt out of place at home with my Nicaraguan heritage I guess.

Do you know what brought her to Canada?

pablo: I do actually, I’ve known this for a long time because she — this is probably pretty normal for parents — but she liked taking out picture books and explaining where she was. So in Nicaragua there was a civil war and after that — she left when she was 20 — she went to New York and spent a couple years there, then she came to BC to go to school at SFU.

My Dad, dropped out [of school] in grade 10 and he ended up moving across the country — he grew up in Halifax — and he was also working at schools. They met because he was organizing an exchange between First Nations here in BC and First Nations of the Mapuche in Latin America. So they needed somebody who spoke Spanish to help translate. They had a deal with SFU so my mum volunteered when SFU was looking for people that could help them translate, and that’s how they met.

alex: Is your cultural identity something that you think about today in some capacity and how has this changed over the years? pablo: I remember this came up more when I was dating [my ex-girlfriend, Mii] and when I was in highschool. Our highschool was pretty mixed actually but it had a lot of white people, and I think to them — it felt like if I was with people who were more ‘white’ it seemed like I stood out more, like people would call me ‘Mexican,’ which I’m not and it was only vaguely annoying. I also went to church for a while and my church was hispanic and it was clear that I was OK with Spanish but I wasn’t as good and my Dad wasn’t Spanish. So it mainly stood out when I was in a group that was one or the other. If I’m around Spanish people they think that like ‘oh, you’re white,’ and like Mii’s mom met me and she thought I was white — Mii is Thai — so I felt like with non-white people it was like ‘oh, you’re white, you’re not really a person of colour,’ which I don’t know. I don’t really think about that much, but with white people it’s like ‘you’re clearly not white,’ so there’s more going on there. I thought it was funny growing up because at [my highschool], Van Tech, we had an exchange student from Mexico and I remember he was like really pale and him and I talked and he was like ‘yeah people never even guess that I’m Mexican, and I speak perfect Spanish, I grew up in Mexico, I am Mexican’ and I was like ‘that’s weird, I get called Mexican all the time.’ I think things have changed in our society where maybe questions of where you’re from, people reflect on that more. I think that’s

something that has also made me change, like if there weren’t so many people talking about it I probably wouldn’t be thinking about it as much, but it’s definitely made me reflect more in recent times. So yes, I have thought a lot more about where I’m from and what that means, but I wouldn’t just say that’s me in a vacuum thinking it, there’s more to it than that.

alex: Do you have any additional memories that you associate with this object, or any significance that it has for you today, that you want to share? pablo: So I think if I look back on it [Gallo Pinto] is what I would connect most with like being Nicaraguan for me. Just the fact that we made that and I didn’t have that in other places, like I wouldn’t see that in restaurants. I feel like — this is probably the case for other people too — but like being Hispanic — and this is something that I did think about as a kid — but the first thing that comes to peoples mind is being Mexican when they think of Spanish. Like their minds don’t really go further south or anywhere else. For me [Gallo Pinto] was something where it was like ‘I have this thing specifically’ you know. Different people in different parts of Latin America eat different foods, prepare things differently and that is something that I think to me, growing up and being told that by my parents that is something Nicaraguan. So I can point to that and be like ‘this is where I’m from.’ I think that’s part of the reason my Dad makes it now even, and he makes it well, because his kids are all Nicaraguan. So I think I’ve always appreciated that, like he fully embraced that.

“Rice and beans are served at every single meal in Nicaragua. It&#39;s either rice and beans, or riceandbeans, otherwise known as Gallo Pinto (“red rooster,” though friends and I used to call it “painted rooster” due to odd translations and plain old foolishness). The name alludes to the color of the mixture of white rice and small red kidney beans, which mirrors that of the king of the coop.” — María del Mar Cuadra Nicaraguan-American Food Stylist &amp; Writer

try out the recipe! cut along the dotted lines to keep the recipe card.

directions ɏɏ Heat pan with oil and onions for 3-4 mins at med temperature.

ɏɏ Throw in the rice mixed for 2 mins then.

ɏɏ T hrow in the beans and cook together, mixing for another 7-10 mins for it to be fully done.

ɏɏ I f you cooked the beans and have &quot;bean water&quot; you can to mix about 1/6 a cup and wait for gallo pinto to dry ( yummy). ɏɏ Add salt and pepper to taste. ɏɏ Y ou can also add garlic with the onions to flavour; and you can add parsley or cilantro chopped at the end too for the last 4 mins or so.

Optional Eat with fresh cheese or feta; Eat with a little sour cream; Eat with sliced fresh tomatoes with lime juice and onions. And of course tortillas.

The Waving Cat · issue 2 A story about growing up between the sticky diner booths of a family owned Taiwanese restaurant.

Objects That Talk! | An Interview by: Alex Bloom with Pablo Fidel Clairmont Salvatierra