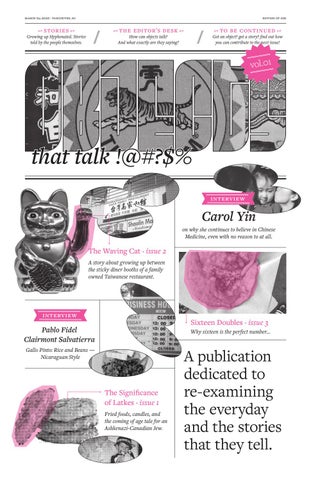 The Waving Cat · issue 2 A story about growing up between the sticky diner booths of a family owned Taiwanese restaurant.

J written and told by Megan Chen I think the only reason I look like this is because I had to sit very sit to get this photo take, for both my Canadian and Taiwanese passport - which is who I am: A Taiwanese-Canadian born and raised in Vancouver BC. My parents, both of whom were born and raised in Taiwan, immigrated to Canada in 1994 and had me in 1998, in Vancouver BC. However, I’d like to imagine that this face tinged with mild anger and annoyance is probably what I looked like each time my parents had to wake me up at 8:00am every Saturday between the ages of 4 - 18 to attend Chinese school. I hated chinese school. I mean, aside from the fact that it was literally school on the weekends, it was also just weird. None of the other kids had to go to school on the weekends, instead they got to attend slumber parties, or playdates in the park where they ate “normal lunches”. Normal lunches looked like snackables and perfectly cut sandwiches, not zha jiang  mian ¹ with its black noodles, or pungent pork and chive dumplings  ².

I’m telling you all this because it’s how I remember my life growing up. Being constantly annoyed and slightly embarrassed at how “Chinese” I was. This led to me spending lots of time pushing away my

heritage – so much so that I didn’t even understand that there was a difference between being Taiwanese and Chinese, and it wasn’t until I was much older that I became interested in reclaiming that part of myself. At that point however, I felt a bit sad and hopeless, was it too late? It felt like it was. Years of stubbornly refusing to pay attention in chinese school had led to broken mandarin, which just widened the communication gap and years of awkward teen angst meant not wanting to talk to my parents — much less inquire and listen to their immigration stories. Which brings us here today. I was curious about this question of “was it too late? Because, if I’m being honest, it wasn’t like I knew absolutely nothing about my Taiwanese heritage. How had I come to possess these different fragments of my culture? As I began to dive deeper, I thought about how, growing up/ and even today, I often associated the “taiwanese” part of myself with certain practices, rituals, foods, and objects.

For example, mooncake ³ , a pastry that is often eaten during Mid-Autumn festival, and Lucky Candy   ⁴ given out during Chinese New Year, reminds me of

My dad and my nephews, Ian and Lucas, on his birthday one year

Me and my mom on Granville Island

the multiple events that would be held at my uncle’s house, large gatherings with all of my extended family together, sharing food, playing mah-johng and catching up. The extravagantly packaged balms and medicines such as Tiger Balm and Wong-Yick Oil ⁵  reminds me of how my mom used to slather me in that stuff if I exhibited any signs of a cold, dooming me to reek of its strong smell the entire school day.

The lucky cat statue ⁶  that my parents used to keep in their restaurant reminds me not only of having to help out as a child in the small family business, but of the Canadian governments blatant discrimination against the chinese back in the day, barring them from entering most professional occupations and limiting them to a few options, such as running laundries, convenience stores, and restaurants. For me, this is a culture pieced together, a history told through disconnected fragments of family traditions and stories in the periphery of my childhood growing up. As someone who has come to associate her cultural identity with certain objects and practices, I’m

curious to see if that’s the case for others connected to the diaspora as well. My project aims to re-imagine the souvenirs in our lives–how do everyday objects and practices become vessels for cultural histories, both personal and shared amongst a collective group of individuals? With this project, I also think about what it means to live in a country like canada that is often touted as a multicultural ideal. While we are lucky in so many ways, it seems like national multiculturalism only values cultures as novelty acts, food in the ethnic aisle, and costumes on holidays, while skipping over the often turbulent history and unresolved narratives of lived experiences. In fact, we don’t often think of personal stories as a part of Canada’s history at all. Although often used as signifiers of our own alienation, perhaps everyday diasporic objects can be reclaimed in a way to shape alternative ideas of cultural history and authenticity. In “Design for The Pluriverse” Arturo Escobar writes about how “...design is a key element in who we become because of the kinds of practices designed objects and tools call on us to perform.” Sherry Turkle writes in her book, Evocative Objects “we think with the objects we love, we love the objects we think with.” Prompted by these two quotes as well as the research I gathered throughout the course of the fall semester at Emily Carr University of Art + Design, I have two major questions: In what ways do these diverse practices construct different selves and cultural identities? What are the challenges of duality and how might designed objects capture those personal stories and pass them on?

My dog, xiao bai, who I had since I was 3 and passed away when I was 18 years old

For me, this is a culture pieced together, a history told through disconnected fragments of family traditions and stories in the periphery of my childhood growing up.

None of the other kids had to go whitekidsonplayground.jpg whitekidsplaying-1.jpg to school on the weekends, instead they got to attend slumber parties, or playdates in the park where they ate â&amp;#x20AC;&amp;#x153;normal lunchesâ&amp;#x20AC;?.

Objects That Talk! Foreword is the first in an on-going publication series. Start here for an overview of the project and the reason behind it all.