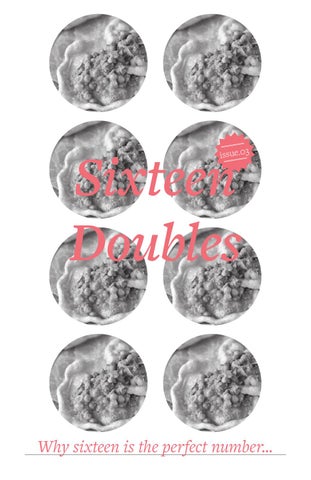 J story written and told by Byron Camacho Of all the street food from my home country of Trinidad and Tobago, doubles are arguably the most popular. They’re cheap, greasy, ﬁlling, and just plain fucking delicious. Doubles are essentially Trinidad and Tobago’s equivalent of a taco—an iconic street food that’s perfect for literally any time of day. More speciﬁcally, it is an East-Indian delicacy consisting of two pieces of bara (a kind of fried dough/ﬂat bread sorta deal) and “curry” channa (chickpeas in sauce). They’re sold by street vendors either in the early morning or late at night. Add-ons include pepper sauce, mango, tamarind and, among others, a cilantro type herb that we basically put on everything in Trinidad called chadon-beni (pronounced shado beni). Unlike tacos, doubles aren’t served on a paper plate but rather, a piece of wax paper that’s used to roll it up to take it on the go. There are few pleasures in life that exceed the experience of twisting open that wax paper, and seeing the steam rise along with the incredible aromas of a freshly made doubles. Why are they called “doubles” you ask? Honestly, for most of my life, I hadn’t the slightest idea—that is until a recent Google search (conducted like three years ago?) provided the answer. Apparently, the channa was originally served on ONE piece of bara until, by popular demand, customers started ordering it on TWO, and the name “doubles” was coined. As for its deeper cultural origins, I am in no place to say. Sure, I could share information that I’ve researched online but, as a white man from Trinidad, I would encourage you to seek out that kind of information from a member of that culture AKA someone more informed than myself. What I can share are some of the things I personally love about doubles. For instance, doubles has always had a certain amount of mystique attached to it. For instance, doubles aren’t served 24/7. Much like

with all street food, you have to seek it out. Also, the very thing that makes doubles special is kept secret by generations of vendors—the recipe behind their sauce. As a kid, I remember hearing stories about doubles vendors incorporating the “sweat of an Obeah woman” into their channa. You never met a more magical thinker than a Trinidadian. Doubles has, among other things, the long-standing reputation of being the perfect food to eat when you’re drunk and/or hungover. Furthermore, due to their small size and overall deliciousness, they go down QUICK—a lesson I learned from a night out many years ago with my cousin Michael. After leaving a party around 4am, Michael and I (wasted) stopped by a doubles vendor, and he insisted that we get not one… not two… but EIGHT doubles. EACH. Michael was not fucking around. At ﬁrst, I thought he was being just a tad overzealous (I was visiting from the States at the time, and hadn’t eaten doubles in a while so I at least had some reason to think so). But once we got home and started getting into our SIXTEEN doubles, the thought immediately dawned on me: Michael was right. Sixteen doubles was the absolute perfect amount! Another thought occurred to me moments later, when I was laying on the couch watching TV, and turned to see Michael… passed out… shirt open… bare chest covered in sheets of wax paper: I am eternally grateful for this man.

A woman serving up freshly made Doubles

I am eternally grateful for doubles.

Chadon-beni: cilantro type herb that is commonly used in Trinidad

The Waving Cat · issue 5 A story about growing up between the sticky diner booths of a family owned Taiwanese restaurant.