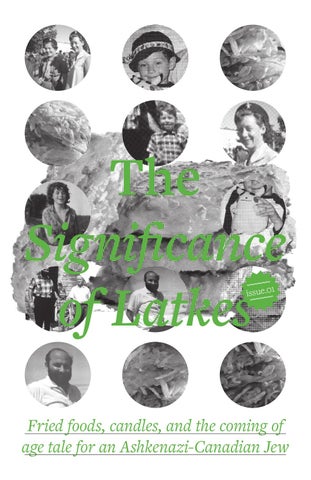 The Significance of Latkes issue.01

Fried foods, candles, and the coming of age tale for an Ashkenazi-Canadian Jew

J written and told by Alex Bloom · photos courtesy of Alex Bloom Since they were never particularly religious we didn’t celebrate most holidays or get to know Vancouver’s broader Jewish community. As a result I grew up being told I was Jewish by family and being told I wasn’t by others, never really having the conviction to defend my identity. During Hanukkah, however, that was different. I felt Jewish during Hanukkah, like I knew who I was. So for me, the latke will always have a special place in my heart. (For those that don’t know, latkes are a kind of potato pancake fried in oil, served with sour cream and apple sauce, and eaten during Hanukkah — and no, they’re not hashbrowns.) There are other foods eaten during Hanukkah, such as sufganiyah (donuts), but if I had to pick one food to represent my identity it would be the latke. Latkes don’t just have significance for me though, their story goes back thousands of years, even if the recipe has changed over time. Hanukkah is a holiday that is about celebrating being Jewish openly as a response to people who wanted to destroy our identity as Jews. And no, I’m not talking about the Nazis, we Jews have existed long before that particular evil came into the world. After the fall of Alexander the Great’s empire a faction known as the Syrian-Greeks came about and their leader, Antiochus IV banned all Jewish practice in his lands and persecuted any Jews who resisted. A Jewish resistance movement called the Maccabees formed and was eventually successful in liberating Jerusalem through a series of hard fought battles. When they took back the temple in Jerusalem there was only enough oil left to light the candles for a day, but miraculously the oil burned for eight days.

There have been many tellings and interpretations of the story of the Maccabees and I’m definitely leaving a lot out, but one consistent point is that the story of Hanukkah is one of perseverance and hope in the face of adversity. Today it is about being proud to be Jewish and being thankful for all G-d has given us. It’s also a holiday about eating fried food! To symbolize the miracle of the oil we eat latkes, and donuts, and other foods fried in oil to celebrate. Who doesn’t like fried food? Being half Jewish with my Dad being the Jewish one complicates my identity further. There are some who would say I’m not Jewish, and by traditional rules, I’m not technically. But I’m descended from Jewish people, and I was always told I was Jewish by that side of my family. Being Jewish is more than just a religion, it’s a culture. I was raised with many aspects of the culture, but since my family was never particularly religious I never had the chance to decide if the faith itself was for me. The actual religion that is Judaism is an aspect of my background that I am now beginning to explore and love, and the act of eating latkes during Hanukkah opened the door for that exploration. In many ways my grandfather, Myer, was the person who made me feel most connected to my Jewish roots: through his stories, his sense of humour, his cooking, and the way he brought together the Jewish side of my family. Myer was the social glue that brought my family together for Hanukkah, and for more than a few dinners with all my extended family. After he passed way these family gatherings were less frequent, my great aunt, Bernice, moved away, and we stopped celebrating Hanukkah as a family.

Alex at age 5 with his father, David Bloom

3 generations of Bloom, my grandfather Myer, my Great-grandfather Israel "Issie" and my Dad

Without as much family to connect me to my roots I was left with objects, chief of which was the latke My grandmother Peggy, I think she was leading girl scout troupe or something in this?

the significance of latkes · alex bloom

itself. Food can be a potent vessel for communicating culture and the latke is no exception. When I make latkes I’m not just making food, I’m remembering a story of my ancestors, I’m remembering my grandfather, and I’m celebrating my Jewish heritage. The latke may seem small, but it was just the first step on a long journey to reclaim the stories of my family and understand my roots. The next step came when I discovered that my great grandmother, Leah, wrote a detailed memoir about her story of immigration to Canada from England, where her parents had fled from Eastern Europe. Not only does her journey shed light on my family’s history, but she frequently mentions food as a part of her identity in her book. It was food that brought me to read her story, and she in turn inspired me to learn more about cooking Jewish food. This will be an ongoing journey, but food is a powerful way to connect people and even to tell stories, and cooking will always be a big part how I celebrate my Jewish identity. While I never had to fight any literal battles to preserve my identity, I have grown up with a very complicated sense of identity, and there have been times when latkes felt like my only connection to that part of my self. For me, latkes, Hanukkah, and the stories that go with them, have been an essential part of my journey to reclaim my identity as a Jew, living in a society that hasn’t particularly wanted me to be one.

“My grandfather, Myer, after climbing the pyramids when they still let you do that. Many of our family gatherings revolved around his generosity and his cooking.”

The Waving Cat · issue 3 A story about growing up between the sticky diner booths of a family owned Taiwanese restaurant. Objects That Talk! | The Significance of Latkes by Alex Bloom

The Significance of Latkes: Fried foods, candles, and the coming of age tale for an Ashkenazi-Canadian Jew.

Objects That Talk! | The Significance of Latkes by Alex Bloom

The Significance of Latkes: Fried foods, candles, and the coming of age tale for an Ashkenazi-Canadian Jew.