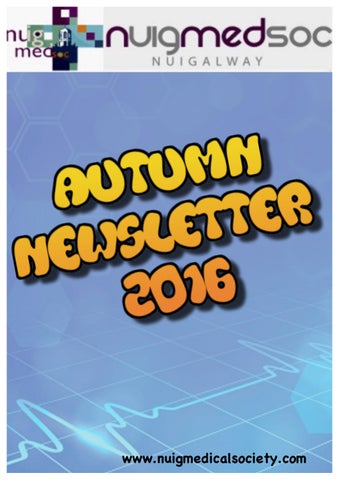 From our Welcome Back Night to Wine and Cheese and the Surf Trip, the fun simply hasnâ&#x20AC;&#x2122;t stopped since we got back. Can you spot yourself in some of our snaps?

This year, MedDay came back with a bang! After its inaugural success last year raising over €10,000 for two deserving charities, our sights were set on another successful year. This year MedDay was rebranded as Déan Athrú (Make a Change). The plan is to look towards this event taking place every year in unison with other Medical schools throughout the country. This year, the committee decided to raise funds in aid of Mental Health Services. Our chosen charity for Galway was Jigsaw; a non-judgemental and confidential support service for young people (15-25) based in Galway City Centre. Funds were also raised in Sligo for the Sligo-Leitrim Mental Health Youth Initiative. By raising money for these two charities, we are hoping to bring further awarenesss to the fact that rates of youth suicidie in Ireland are now the 4th highest in Europe and we want to have a role in helping to change that. On the 29th of September, students in NUIG took to the streets of Galway. They played music, they baked, they danced and raised €11,734 for Jigsaw, Galway. A huge thank you to everybody who took part on the day.

Not sure what to do with yourself this summer? So many plans but no real plans? Here are a few snippets from what your fellow students did last summer… From the highs of Amsterdam to the depths of the Adriatic Ocean, the nightlife in Berlin to ‘Pub Bled and it’s adjacent lake, our go pro and our memories captured many a ‘gas’ moment on our interrailing trip. Here’s some tips from an experienced traveller… • Do pay for the metro in Prague to avoid an unpleasant ticket man and more importantly to avoid the €30 he’s guaranteed to take from you. • You can actually get burnt in Bled • Salt mines are not one bit entertaining • Don’t mess with boat drivers in Croatia unless you want to swim back to the mainland at 5am. • Book night trains well in advance to avoid french people and their bare feet • Never forget to treat yourself Interrailing may leave a large dent in your back pocket but it leaves you rick with memories, experiences and many potential instagrams. Happy Travels – From an anonymous globetrotter

This summer I was lucky enough to spend three months working in Barretstown in the beautiful county Kildare. Since 1994, Barretstown’s mission is to rebuild the lives of children and families affected by serious illness. One way in which they achieve this is through week long summer camps, where campers can “Kick back, relax and raise a little hell”. There is a wide range of activities for the campers such as canoeing, archery, mini golf, arts and crafts, drama, baking and so much more. Campers from all over the world regain their confidence, independence and self-esteem. At Barretstown, everything is paid for; flights, buses, food and accommodation. Another worry lifted from parent’s shoulders. Barretstown is the happiest, most positive place I have ever been and could possibly ever imagine. Laughter is the universal language here, where one child’s smile can carry you through the day, where late night and early mornings don’t matter because you’ve got super powers, where the impossible becomes possible. I learned a lot about myself along the way, and it has certainly changed me as a person. I could not recommend it highly enough for anybody who enjoys working with children. Go to www.barretstown.org for more information. - Kate Rigney, 3rd Med

THEIR LIVES MATTER We had decided early in the year that we were going to take part in VSA for the summer. We sent emails to various hospitals and clinics around Africa. In the end, it was the paediatric oncology ward in Muhumbili National Hospital, Dar es Salaam that we chose. Since then, I don’t think any of us have regretted our decision! We were put in contact with Dr.Trish Scanlon, a paediatric oncologist from Co.Wexford who runs the service in Muhimbili. The ward itself is the only paediatric oncology sevice in Tanzania, a country with a population of nearly 50 million. What did we do in Mulhimbili? Consultant-led ward rounds which we were encourged to present at Brought patients for x-rays, CTs etc. Spent time in the blood bank getting blood for patients on the ward Tutorials with Dr.Scanlon Observed and assisted in procedures Out patients clinics SO MANY PHYSICAL EXAMS My time in Muhimbili was definitely one of the best experiences of my life, and it is definitely somewhere that I hope to return to again in the future once I’m qualified. One of the best things about the work being done is that EVERYTHING, from chemotherapy to patients’ food to teachers and clowns who visited the children, is covered by the charity that Dr.Scanlon founded; Tumaini la Maisha (Their Lives Matter), meaning that the patients themselves don’t have any expenses to worry about. Of course, we couldn’t leave Africa without doing a few weeks of travelling. Tanzania is famous for it’s national parks and beautiful island of Zanzibar. Our 5 weeks of traveling included 10 nights on Zanzibar,a full moon party, 3 day hike in the Usambara mountains, 4 day Safari in the Serengeti, Tarengaire and Ngorongoro Crater National Parks, numerous hangovers, an African wedding, 14 hour bus journeys and swimming with wild dolphins. I urge anybody considering VSA in the future to consider spending time in Tanzania, as I guarantee that you will not regret it. Make sure to check out the THEIR LIVES MATTER website for more details! - Shane Elwood, Final Med.

The winner of our photo competition is none other than 4th Med John Martin, CONGRATS JOHNNY ! Also, check out some of this yearâ&#x20AC;&#x2122;s other amazing entries at nuigmedsoc.

Are you ready for a night of enchantment, inspiration and fantasy held under mask and cloak? This yearâ&#x20AC;&#x2122;s Masquerade Ball in aid of NUIG VSA is taking place under candelight in the luxurious Breaffy House, Castlebar on Saturday the 12th of November. You do not want to miss out!! Tickets are on sale now!

Can you guess the MedSoc Team member from their puffy cheeks? Here, I’ll give you a hint …

Three words to describe this girl: Classy, sassy and a bit smart assy. She has an “adorable” snort and a fear of buttons. Only thing she’s good for really is bringing sweets to meetings. Guess who?

This girl describes her role on Medsoc as absolutely indispensable. She loves coffee, like really loves coffee. She’s got a sunny disposition, loves the smell of … coffee … and banana ice-cream? Just look at that smile.

Decked out in a robe fit for royalty. It’s our very own King ____. Fill in the blanks.

This is Matt’s friend. He tries to make student’s feel good about themselves, but just won’t shut up. He aspires to be as inspirational as Baloo from the jungle book and lives by the quote – “Wake up with determination, go to sleep with satisfaction. Who could this inspirational fella be?

This guy’s main role is to be around and try to screw up as little as possible. He looks up to Batman, enjoys the odd quiet pint or two and A Head Full of Dreams would be one song on the soundtrack of his life. Guess who?

Also known as “The Delegator”. This guy thinks he’s a virgo, isn’t entirely sure. He describes himself as weird, outgoing and friendly…ish. His quirky talent is that he can roll his tongue and his favourite flavour ice-cream is bubblegum – How’s that for weird? Who could this dog-lovin Canadian be?

That’s me there writing my first Newsletter. Cutest person on Medsoc.

This man – The guy with all the jokes at meetings. He’s all about the Education. Asked to describe himself in 3 words – Lazy. He can open a bottle of wine with a shoe (You’ll have to ask him for more deets) and his worst fear would be not recognising a case of Marfans. Can you guess?

This girl is all about multi-tasking in meetings. Eat a four-course meal while taking notes? No problem! Gotta keep an eye on her, for fear she’d cart bucket loads of cash off for a quick trip to Rome with some musicians in tow…

Preventative Cardiology – that’s this guy’s role. Oh and rugby. But he would never miss a meeting for rugby. His hero is Derek Mooney from Winning Streak. He has the largest bladder in his year, probably something to do with rugby. He would like everyone to know that he most definitely is Larger.Than.Martin. – No prizes for guessng who this is…

Vroom vroom here comes Mayo for Sam. His heroes include Cascada and Mr. Bean (weird) and his quirky talents include hand-standing on a surf board and talking about Snow sports all day long.

Princess Leia or “The Bull Hayes” as she’s also known. She has the amazing ability to work an apundance of puns into one sentence. Her job is to keep everyone entertained – “Hey would you like a free wristband for Karma?”

Your pre-clinical rep ladies and gentleman and ultimate sass queen. Just look at that pose.

That’s the pot she collects and stores all the Medsoc money in. She admits to secretly embezzling dollahs from everyone and using them to purchase mountains of chicken wings. She’s a talentless slug, loves the smell of boys (no surprise) and Kiss Me by 1D is the song that perfectly sums up this gal’s life!

AMSI is love. AMSI is life. She’s our Mammy. Ron Weasley is her dream man, she imagines walking the prom eating chips from McDonaghs with him. Catch up with all things MedSoc in our hot-off-the-(online)press newsletter! Inside, you'll find info on our upcoming events and you might e...

Catch up with all things MedSoc in our hot-off-the-(online)press newsletter! Inside, you'll find info on our upcoming events and you might e...