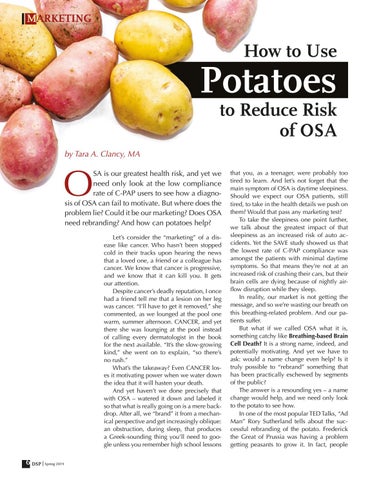 to Reduce Risk of OSA

by Tara A. Clancy, MA

SA is our greatest health risk, and yet we need only look at the low compliance rate of C-PAP users to see how a diagnosis of OSA can fail to motivate. But where does the problem lie? Could it be our marketing? Does OSA need rebranding? And how can potatoes help? Let’s consider the “marketing” of a disease like cancer. Who hasn’t been stopped cold in their tracks upon hearing the news that a loved one, a friend or a colleague has cancer. We know that cancer is progressive, and we know that it can kill you. It gets our attention. Despite cancer’s deadly reputation, I once had a friend tell me that a lesion on her leg was cancer. “I’ll have to get it removed,” she commented, as we lounged at the pool one warm, summer afternoon. CANCER, and yet there she was lounging at the pool instead of calling every dermatologist in the book for the next available. “It’s the slow-growing kind,” she went on to explain, “so there’s no rush.” What’s the takeaway? Even CANCER loses it motivating power when we water down the idea that it will hasten your death. And yet haven’t we done precisely that with OSA – watered it down and labeled it so that what is really going on is a mere backdrop. After all, we “brand” it from a mechanical perspective and get increasingly oblique: an obstruction, during sleep, that produces a Greek-sounding thing you’ll need to google unless you remember high school lessons

that you, as a teenager, were probably too tired to learn. And let’s not forget that the main symptom of OSA is daytime sleepiness. Should we expect our OSA patients, still tired, to take in the health details we push on them? Would that pass any marketing test? To take the sleepiness one point further, we talk about the greatest impact of that sleepiness as an increased risk of auto accidents. Yet the SAVE study showed us that the lowest rate of C-PAP compliance was amongst the patients with minimal daytime symptoms. So that means they’re not at an increased risk of crashing their cars, but their brain cells are dying because of nightly airflow disruption while they sleep. In reality, our market is not getting the message, and so we’re wasting our breath on this breathing-related problem. And our patients suffer. But what if we called OSA what it is, something catchy like Breathing-based Brain Cell Death? It is a strong name, indeed, and potentially motivating. And yet we have to ask: would a name change even help? Is it truly possible to “rebrand” something that has been practically eschewed by segments of the public? The answer is a resounding yes – a name change would help, and we need only look to the potato to see how. In one of the most popular TED Talks, “Ad Man” Rory Sutherland tells about the successful rebranding of the potato. Frederick the Great of Prussia was having a problem getting peasants to grow it. In fact, people 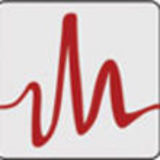