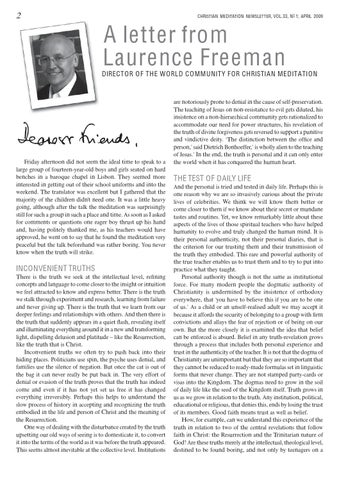 A letter from Laurence Freeman

Friday afternoon did not seem the ideal time to speak to a large group of fourteen-year-old boys and girls seated on hard benches in a baroque chapel in Lisbon. They seemed more interested in getting out of their school uniforms and into the weekend. The translator was excellent but I gathered that the majority of the children didn’t need one. It was a little heavy going, although after the talk the meditation was surprisingly still for such a group in such a place and time. As soon as I asked for comments or questions one eager boy thrust up his hand and, having politely thanked me, as his teachers would have approved, he went on to say that he found the meditation very peaceful but the talk beforehand was rather boring. You never know when the truth will strike.

There is the truth we seek at the intellectual level, refining concepts and language to come closer to the insight or intuition we feel attracted to know and express better. There is the truth we stalk through experiment and research, learning from failure and never giving up. There is the truth that we learn from our deeper feelings and relationships with others. And then there is the truth that suddenly appears in a quiet flash, revealing itself and illuminating everything around it in a new and transforming light, dispelling delusion and platitude – like the Resurrection, like the truth that is Christ. Inconvenient truths we often try to push back into their hiding places. Politicians use spin, the psyche uses denial, and families use the silence of negation. But once the cat is out of the bag it can never really be put back in. The very effort of denial or evasion of the truth proves that the truth has indeed come and even if it has not yet set us free it has changed everything irreversibly. Perhaps this helps to understand the slow process of history in accepting and recognizing the truth embodied in the life and person of Christ and the meaning of the Resurrection. One way of dealing with the disturbance created by the truth upsetting our old ways of seeing is to domesticate it, to convert it into the terms of the world as it was before the truth appeared. This seems almost inevitable at the collective level. Institutions

are notoriously prone to denial in the cause of self-preservation. The teaching of Jesus on non-resistance to evil gets diluted, his insistence on a non-hierarchical community gets rationalized to accommodate our need for power structures, his revelation of the truth of divine forgiveness gets reversed to support a punitive and vindictive deity. ‘The distinction between the office and person,’ said Dietrich Bonhoeffer,’ is wholly alien to the teaching of Jesus.’ In the end, the truth is personal and it can only enter the world when it has conquered the human heart.

THE TEST OF DAILY LIFE

And the personal is tried and tested in daily life. Perhaps this is one reason why we are so invasively curious about the private lives of celebrities. We think we will know them better or come closer to them if we know about their secret or mundane tastes and routines. Yet, we know remarkably little about these aspects of the lives of those spiritual teachers who have helped humanity to evolve and truly changed the human mind. It is their personal authenticity, not their personal diaries, that is the criterion for our trusting them and their transmission of the truth they embodied. This rare and powerful authority of the true teacher enables us to trust them and to try to put into practice what they taught. Personal authority though is not the same as institutional force. For many modern people the dogmatic authority of Christianity is undermined by the insistence of orthodoxy everywhere, that ‘you have to believe this if you are to be one of us.’ As a child or an unself-realised adult we may accept it because it affords the security of belonging to a group with firm convictions and allays the fear of rejection or of being on our own. But the more closely it is examined the idea that belief can be enforced is absurd. Belief in any truth-revelation grows through a process that includes both personal experience and trust in the authenticity of the teacher. It is not that the dogma of Christianity are unimportant but that they are so important that they cannot be reduced to ready-made formulas set in linguistic forms that never change. They are not stamped party-cards or visas into the Kingdom. The dogmas need to grow in the soil of daily life like the seed of the Kingdom itself. Truth grows in us as we grow in relation to the truth. Any institution, political, educational or religious, that denies this, ends by losing the trust of its members. Good faith means trust as well as belief. How, for example, can we understand this experience of the truth in relation to two of the central revelations that follow faith in Christ: the Resurrection and the Trinitarian nature of God? Are these truths merely at the intellectual, theological level, destined to be found boring, and not only by teenagers on a 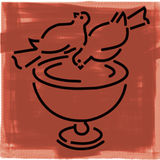