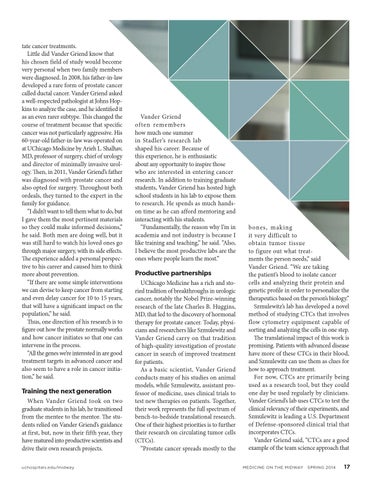 tate cancer treatments. Little did Vander Griend know that his chosen field of study would become very personal when two family members were diagnosed. In 2008, his father-in-law developed a rare form of prostate cancer called ductal cancer. Vander Griend asked a well-respected pathologist at Johns Hopkins to analyze the case, and he identified it as an even rarer subtype. This changed the course of treatment because that specific cancer was not particularly aggressive. His 60-year-old father-in-law was operated on at UChicago Medicine by Arieh L. Shalhav, MD, professor of surgery, chief of urology and director of minimally invasive urology. Then, in 2011, Vander Griend’s father was diagnosed with prostate cancer and also opted for surgery. Throughout both ordeals, they turned to the expert in the family for guidance. “I didn’t want to tell them what to do, but I gave them the most pertinent materials so they could make informed decisions,” he said. Both men are doing well, but it was still hard to watch his loved ones go through major surgery, with its side effects. The experience added a personal perspective to his career and caused him to think more about prevention. “If there are some simple interventions we can devise to keep cancer from starting and even delay cancer for 10 to 15 years, that will have a significant impact on the population,” he said. Thus, one direction of his research is to figure out how the prostate normally works and how cancer initiates so that one can intervene in the process. “All the genes we’re interested in are good treatment targets in advanced cancer and also seem to have a role in cancer initiation,” he said.

Training the next generation When Vander Griend took on two graduate students in his lab, he transitioned from the mentee to the mentor. The students relied on Vander Griend’s guidance at first, but, now in their fifth year, they have matured into productive scientists and drive their own research projects. uchospitals.edu/midway

Vander Griend often remembers how much one summer in Stadler’s research lab shaped his career. Because of this experience, he is enthusiastic about any opportunity to inspire those who are interested in entering cancer research. In addition to training graduate students, Vander Griend has hosted high school students in his lab to expose them to research. He spends as much handson time as he can afford mentoring and interacting with his students. “Fundamentally, the reason why I’m in academia and not industry is because I like training and teaching,” he said. “Also, I believe the most productive labs are the ones where people learn the most.”

Productive partnerships UChicago Medicine has a rich and storied tradition of breakthroughs in urologic cancer, notably the Nobel Prize-winning research of the late Charles B. Huggins, MD, that led to the discovery of hormonal therapy for prostate cancer. Today, physicians and researchers like Szmulewitz and Vander Griend carry on that tradition of high-quality investigation of prostate cancer in search of improved treatment for patients. As a basic scientist, Vander Griend conducts many of his studies on animal models, while Szmulewitz, assistant professor of medicine, uses clinical trials to test new therapies on patients. Together, their work represents the full spectrum of bench-to-bedside translational research. One of their highest priorities is to further their research on circulating tumor cells (CTCs). “Prostate cancer spreads mostly to the

b ones, making it very difficult to obtain tumor tissue to figure out what treatments the person needs,” said Vander Griend. “We are taking the patient’s blood to isolate cancer cells and analyzing their protein and genetic profile in order to personalize the therapeutics based on the person’s biology.” Szmulewitz’s lab has developed a novel method of studying CTCs that involves flow cytometry equipment capable of sorting and analyzing the cells in one step. The translational impact of this work is promising. Patients with advanced disease have more of these CTCs in their blood, and Szmulewitz can use them as clues for how to approach treatment. For now, CTCs are primarily being used as a research tool, but they could one day be used regularly by clinicians. Vander Griend’s lab uses CTCs to test the clinical relevancy of their experiments, and Szmulewitz is leading a U.S. Department of Defense-sponsored clinical trial that incorporates CTCs. Vander Griend said, “CTCs are a good example of the team science approach that MEDICINE ON THE MIDWAY 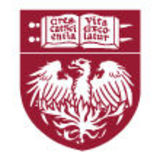