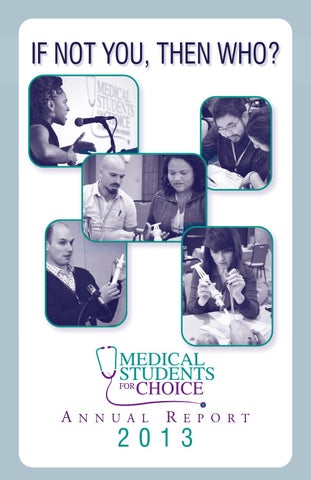 IF NOT YOU, THEN WHO?

UPDATE FROM THE PRESIDENT As I look back on my year as President of the Board of Directors, I feel incredibly proud to be a part of the leadership of Medical Students for Choice. As we spent 2013 celebrating our 20th anniversary, I was given the opportunity to meet many of MSFCâ&amp;#x20AC;&amp;#x2122;s talented alumni and I was often blown away by stories of how their experience with MSFC impacted their careers. From medical directors of Planned Parenthoods, to private practice ob/gyns, to pro-choice physicians in a wide range of medical specialties, each alumnus has a story that reinforces the importance of the mission of Medical Students for Choice. Even as our grassroots continues to grow in the United States and around the globe, medical students still find it challenging to access comprehensive reproductive health training. Laws and regulations that place undue burdens on abortion providers foreshadow a continued shortage of physicians who are able to offer the complete range of reproductive health options. MSFC continues to lead the way in overcoming these challenges by encouraging medical students to be the change they wish to see. Last year, with the pilot of the Abortion Training Institute, we gave students a new opportunity to supplement their medical education with essential knowledge and skills related to abortion care and contraception. We expanded to a record number of countries, grew our externship program, and hosted conferences both in the United States and internationally. These innovations are, of course, in addition to the untiring work of medical students and residents to host educational workshops and lectures, clinic visits, informal discussions with local providers, and tackle curriculum reform efforts within environments known to be resistant to change. Students around the globe are stepping up in greater numbers to take their education into their own hands. As our proud MSFC Alumni Award winner pointed out at the Conference on Family Planning, through collective action and support the path to provision becomes easier for each individual. Thank you for joining the MSFC community to support the next generation of abortion providers and pro-choice physicians. Our work creates a larger and larger impact because of you. With tremendous gratitude,

CREATING TOMORROW’S ABORTION PROVIDERS AND PRO-CHOICE PHYSICIANS Following the 2009 murder of Dr. George Tiller, Wichita, Kansas was added to the growing list of places without an abortion provider. Five years later at our 2013 Conference on Family Planning, we proudly presented our MSFC Alumni Award to the brave provider who stepped in to bring abortion provision back to Wichita after too long of an absence. She shared her vision for a world where there are abortion providers and pro-choice physicians in all medical departments, hospitals, and clinics. And finally, she reminisced on how the words she had heard at a previous MSFC conference had spoken to her and helped solidify her decision to serve women by providing abortions. She implored the room to consider these same words: “IF NOT YOU, THEN WHO?”

Twenty years after our founding, our grassroots has expanded to an unprecedented 167 chapters in 13 countries. This incredible energy and hard work on the ground assures us that when these medical students become practicing physicians they will be pro-choice voices in their places of work, and in their practices. And above all they will be teachers and mentors for future generations of medical students and residents. We continue to ask, “If not you, then who?” so that patients around the globe can walk into their doctors’ offices and know that the full spectrum of reproductive health services will be provided by a caring and knowledgeable physician.

PROGRAM HIGHLIGHTS Student Organizing At the close of 2013 the MSFC grassroots consisted of a record 167 chapters at medical schools across the globe. In just two semesters, our chapters hosted over 1,000 events with the support of MSFC staff. These events, which ranged from hands-on trainings to dinners with current abortion providers, encourage students to consider abortion provision as a viable component of their future medical practice by providing exposure to educational content and creating a supportive community network.

From the Grassroots: Second year medical student and MSFC leader, Katherine, set up a series of informational stations, each with a resident or faculty member who introduced a contraceptive option, demonstrated how to use it, and helped medical students learn insertion techniques for IUDs. By the time everyone rotated through each stations, they were familiar with a range of contraceptive options. They also all went home with charts and references for their white coat pockets!

MSFC accepted 87 externs for 2013, representing a 5 percent increase from 2012. While the shortage of available training sites continues to present challenges for the program, MSFC has developed strong relationships with many training sites, including those abroad. This effort has allowed MSFC to increase our number of funded externships and, in turn, the number of students who intend to become abortion providers. After completing the externship, 91% of participants said that they plan to provide medical or surgical abortions in their future practice.

Abortion Training Institutes MSFC piloted a new program in 2013, the Abortion Training Institute, a oneand-a-half day, fully-funded program for medical students. Participants received an intensive overview of abortion, including the evaluation of the products of conception, first and second trimester techniques, and a values clarification session. MSFC received over 90 applications for the first Abortion Training Institute and accepted 29 participants â&amp;#x20AC;&amp;#x201C; including one student from Rwanda. At the completion of the institute, 82% of applicants indicated a definite intention to provide abortion services in their future practice. We are continuing to build on this success in the current year and have three Abortion Training Institutes planned for 2014. From the Grassroots: Third-year Danielle is working on including an abortion Curriculum Reform lecture in the required In addition to hosting their own events, 41% of chapters reproductive health course are actively engaged in reforming their medical school and a Problem-Based curricula to enact formalized change for students that Learning case on pregnancy come after them. This figure is up almost a full ten percent from last year! One intervention that we credit for options counseling in the this increased number is the organization of a Curriculum required pre-clinical curriculum at her school. Working Group. Members of this group meet bimonthly Danielle has discussed to support each otherâ&amp;#x20AC;&amp;#x2122;s curriculum reform efforts and discuss strategies that may be applied across the grassroots. including abortion education in the new curriculum with faculty members and is currently setting up meetings with the curriculum committee to present examples of material that could be included. Projects like those undertaken by Danielle are the backbone of MSFCâ&amp;#x20AC;&amp;#x2122;s curriculum reform efforts!

Conferences The annual Conference on Family Planning took place on November 9th and 10th in Denver, Colorado. The conference drew 298 attendees from 80 different schools who gathered for a weekend of educational sessions, networking opportunities and handson training sessions. Popular sessions included “Health Has No Borders: Reproductive Health Access Worldwide“, “Social Context of Women’s Decisions About Abortion Methods“ and “Addressing Health Disparities through Family Planning Education.” After an inspiring plenary address from a notable MSFC alum, one medical student attendee said, “[A]s I sat in that conference room in Denver this past November, I saw the strength of all these people together and I felt the love and acceptance that each person showed each other and I realized I could not stay silent anymore.”

Students abroad have their own cultural and political contexts to work within. To support this diversity, large MSFC meetings also occurred in Canada and Ireland. Thirty-five students took the opportunity to gain a deeper understanding of abortion techniques at a conference held in Toronto. For our Irish chapters, the meeting covered a range of country-specific topics including the current legal and medical considerations for physicians treating patients with unplanned pregnancy in Ireland and a comprehensive birth control lecture.

Collaborations MSFC chapters continue to work in coalition with other student clubs on their campuses, with medical associations, and with clinics in their communities. 88% reported collaborating with one or more organizations this year including local clinics, Planned Parenthood, and other pro-choice student groups. Several chapters also engaged more directly in policy advocacy. For example, students at James Cook University, the first MSFC chapter in Australia, wrote a letter in response to the Australian Medical Students Association’s Conscientious Objectors policy about why physicians must be required to give a woman an effective referral to an abortion provider even if the physician personally objects to abortion.

We thank our wonderful community of donors whose generous contributions allow us to continue our work. Your gifts make our activists’ accomplishments possible!

Net Assets at Beginning of Year

Net Assets at End of Year

“Medical Students for Choice has played a major role in shaping not only my medical education but me as a person. Through workshops and educational experiences I have learned what I want to do with my life and what kind of physician I hope to become. MSFC has shaped my education by encouraging me to provide reproductive services for women and allowing me to impact my fellow medical students to become educated compassionate physicians.”

The University of Toledo College of Medicine