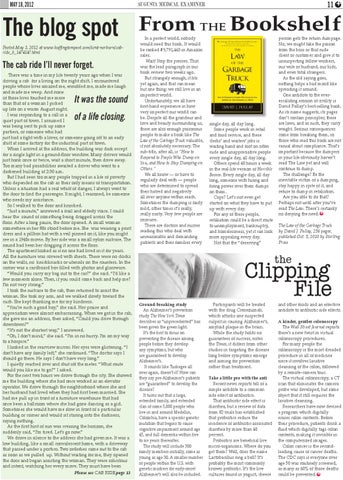 The blog spot From THE Bookshelf Posted May 3, 2012 at www.huffingtompost.com/kent-nerburn/cabride_b_1474147.html

The cab ride I’ll never forget. There was a time in my life twenty years ago when I was driving a cab for a living on the night shift. I encountered people whose lives amazed me, ennobled me, made me laugh and made me weep. And none of those lives touched me more than that of a woman I picked up late on a warm August night. I was responding to a call in a quiet part of town. I assumed I was being sent to pick up some partiers, or someone who had just had a fight with a lover, or someone going off to an early shift at some factory for the industrial part of town. When I arrived at the address, the building was dark except for a single light in a ground-floor window. Many drivers would just honk once or twice, wait a short minute, then drive away. Too many bad possibilities awaited a driver who went to a darkened building at 2:30 a.m. But I had seen too many people trapped in a life of poverty who depended on the cab as their only means of transportation. Unless a situation had a real whiff of danger, I always went to the door to find the passenger. It might, I reasoned, be someone who needs my assistance. So I walked to the door and knocked. “Just a minute,” answered a frail and elderly voice. I could hear the sound of something being dragged across the floor. After a long pause, the door opened. A small woman somewhere in her 80s stood before me. She was wearing a print dress and a pillbox hat with a veil pinned on it, like you might see in a 1940s movie. By her side was a small nylon suitcase. The sound had been her dragging it across the floor. The apartment looked as if no one had lived in it for years. All the furniture was covered with sheets. There were no clocks on the walls, no knickknacks or utensils on the counters. In the corner was a cardboard box filled with photos and glassware. “Would you carry my bag out to the car?” she said. “I’d like a few moments alone. Then, if you could come back and help me? I’m not very strong.” I took the suitcase to the cab, then returned to assist the woman. She took my arm, and we walked slowly toward the curb. She kept thanking me for my kindness. “You’re such a good boy,” she said. Her praise and appreciation were almost embarrassing. When we got in the cab, she gave me an address, then asked, “Could you drive through downtown?” “It’s not the shortest way,” I answered. “Oh, I don’t mind,” she said. “I’m in no hurry. I’m on my way to a hospice.” I looked in the rearview mirror. Her eyes were glistening. “I don’t have any family left,” she continued. “The doctor says I should go there. He says I don’t have very long.” I quietly reached over and shut off the meter. “What route would you like me to go?” I asked. For the next two hours we drove through the city. She showed me the building where she had once worked as an elevator operator. We drove through the neighborhood where she and her husband had lived when they had first been married. She had me pull up in front of a furniture warehouse that had once been a ballroom where she had gone dancing as a girl. Sometimes she would have me slow in front of a particular building or corner and would sit staring into the darkness, saying nothing. As the first hint of sun was creasing the horizon, she suddenly said, “I’m tired. Let’s go now.” We drove in silence to the address she had given me. It was a low building, like a small convalescent home, with a driveway that passed under a portico. Two orderlies came out to the cab as soon as we pulled up. Without waiting for me, they opened the door and began assisting the woman. They were solicitous and intent, watching her every move. They must have been

It was the sound

of a life closing.

In a perfect world, nobody would need this book. It would be ranked #9,791,463 in Amazon sales. Wait! Stop the presses. That was the lead paragraph in our book review two weeks ago. But strangely enough, it fits yet again, and that can mean but one thing: we still live in an imperfect world. Unfortunately, we all have first-hand experience in how very imperfect our world can be. Despite all the grandeur and love and beauty surrounding us, there are also enough poisonous people to make a book like The Law of the Garbage Truck valuable, if not absolutely necessary. The sub-title, after all, is “How to Respond to People Who Dump on You, and How to Stop Dumping on Others.” We all know — or have to regularly deal with — people who are determined to spread their hatred and negativity all over anyone within reach. Sometimes the dumping is fairly mild, other times it’s really, really nasty. Very few people are immune. There are doctors and nurses reading this who deal with unreasonable and demanding patients and their families every

single day, all day long. Some people work in retail and food service, and these clerks’ and waiters’ jobs is waiting hand and foot on often rude and unappreciative people every single day, all day long. Others spend 40 hours a week in the real-life version of Horrible Bosses. Every single day, all day long, someone with hiring and firing power over them dumps on them. Cops? Let’s not even get started on what they have to put up with every day. For any of these people, retaliation could be a direct route to unemployment, bankruptcy, and homelessness, yet it can look more appealing every day. Not that the “deserving”

person gets the return dumpage. No, we might take the poison from the boss or that rude client or customer and give it to unsuspecting fellow workers, our wife or husband, our kids, and even total strangers. As the old saying goes, nothing helps a bad mood like spreading it around. One antidote to the everescalating erosion of civility is David Pollay’s best-selling book. As its name suggests, its pages don’t contain principles; these are laws, and as such, they carry weight. Serious consequences come from breaking them, so those who read this book are not casual about compliance. That’s important because the dumpers in your life obviously haven’t read The Law yet and will continue to dump. The challenge? Be the inevitable victim of a dumping, stay happy in spite of it, and refuse to dump in retaliation. Are you able to do that? Perhaps not until after you’ve read The Law. There’s certainly no denying the need. +

Clipping File Ground-breaking study An Alzheimer’s prevention study The New York Times describes as “unprecedented” has been given the green light. It’s the first to focus on preventing the disease among people before they develop any symptoms, but who are guaranteed to develop Alzheimer’s. It sounds like Tuskegee all over again, doesn’t it? How can they say pre-Alzheimer’s patients are “guaranteed” to develop the disease? It turns out that a large, extended family, and extended clan of some 5,000 people who live in and around Medellin, Colombia, have a specific genetic mutation that begins to cause cognitive impairment around age 45, and full dementia within five to six years thereafter. The study will include 300 family members initially, some as young as age 30. A smaller number of people within the U.S. with genetic markers for early-onset Alzheimer’s will also be included.

Participants will be treated with the drug Crenezumab, which attacks one suspected culprit in causing Alzheimer’s, amyloid plaque in the brain. While the study holds no guarantees of success, notes the Times, it differs from other studies in targeting the disease long before symptoms emerge and aiming for prevention rather than treatment. Take a little pro with the anti Recent news reports tell of a simple antidote to a common side effect of antibiotics. That antibiotic side effect is diarrhea, but a review of data from 82 trials has established that probiotics reduce the incidence of antibiotic-associated diarrhea by more than 40 percent. Probiotics are beneficial live micro-organisms. Where do you get them? Well, does the name Lactobacillus ring a bell? It’s probably the most commonly known probiotic. It’s the live cultures found in yogurt, cheese

and other foods and an effective antidote to antibiotic side effects. A kinder, gentler colonoscopy The Wall Street Journal reports there’s a new twist in virtual colonoscopy procedures. For many people the colonoscopy is the most dreaded procedure in all of medicine since it involves laxative cleansing of the colon, followed by a remote-camera tour. The virtual colonoscopy, a CT scan that eliminates the camera probe was developed, but some object that it still requires the laxative cleansing. Researchers have now devised a program which digitally erases colon contents. Before their procedure, patients drink a fluid which digitally tags colon contents, making it invisible in the computerized images. Colon cancer is the secondleading cause of cancer deaths. The CDC says if everyone over age 50 was routinely screened, as many as 60% of those deaths could be prevented. +