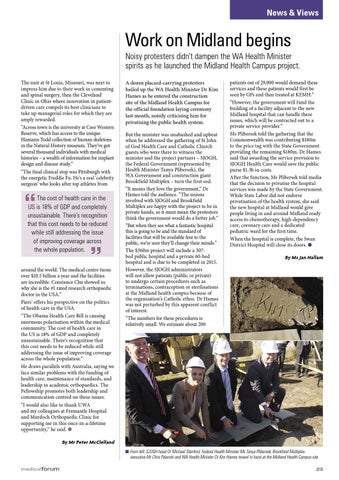 Work on Midland begins Noisy protesters didn’t dampen the WA Health Minister spirits as he launched the Midland Health Campus project. The unit at St Louis, Missouri, was next to impress him due to their work in cementing and spinal surgery, then the Cleveland Clinic in Ohio where innovation in patientdriven care compels its best clinicians to take up managerial roles for which they are amply rewarded. “Across town is the university at Case Western Reserve, which has access to the unique Hamann Todd collection of human skeletons in the Natural History museum. They’ve got several thousand individuals with medical histories – a wealth of information for implant design and disease study.” “The final clinical stop was Pittsburgh with the energetic Freddie Fu. He’s a real ‘celebrity surgeon’ who looks after top athletes from

A dozen placard-carrying protesters bailed up the WA Health Minister Dr Kim Hames as he entered the construction site of the Midland Health Campus for the official foundation laying ceremony last month, noisily criticising him for privatising the public health system. But the minister was unabashed and upbeat when he addressed the gathering of St John of God Health Care and Catholic Church guests who were there to witness the minister and the project partners – SJOGH, the Federal Government (represented by Health Minister Tanya Plibersek), the WA Government and construction giant Brookfield Multiplex – turn the first sod. “It means they love the government,” Dr Hames told the audience. “The unions involved with SJOGH and Brookfield Multiplex are happy with the project to be in private hands, so it must mean the protestors think the government would do a better job.” “But when they see what a fantastic hospital this is going to be and the standard of facilities that will be available free to the public, we’re sure they’ll change their minds.” The $360m project will include a 307bed public hospital and a private 60-bed hospital and is due to be completed in 2015. However, the SJOGH administrators will not allow patients (public or private) to undergo certain procedures such as terminations, contraception or sterilisations at the Midland health campus because of the organisation’s Catholic ethos. Dr Hames was not perturbed by this apparent conflict of interest. “The numbers for these procedures is relatively small. We estimate about 200

patients out of 29,000 would demand these services and these patients would first be seen by GPs and then treated at KEMH.” “However, the government will fund the building of a facility adjacent to the new Midland hospital that can handle these issues, which will be contracted out to a private service provider.” Ms Plibersek told the gathering that the Commonwealth was contributing $180m to the price tag with the State Government providing the remaining $180m. Dr Hames said that awarding the service provision to SJOGH Health Care would save the public purse $1.3b in costs. After the function, Ms Plibersek told media that the decision to privatise the hospital services was made by the State Government. While State Labor did not endorse privatisation of the health system, she said the new hospital at Midland would give people living in and around Midland ready access to chemotherapy, high-dependency care, coronary care and a dedicated pediatric ward for the first time. When the hospital is complete, the Swan District Hospital will close its doors. O

He draws parallels with Australia, saying we face similar problems with the funding of health care, maintenance of standards, and leadership in academic orthopaedics. The Fellowship promotes both leadership and communication centred on these issues. “I would also like to thank UWA and my colleagues at Fremantle Hospital and Murdoch Orthopaedic Clinic for supporting me in this once-in-a-lifetime opportunity,” he said. O 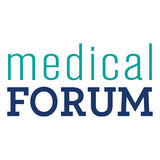