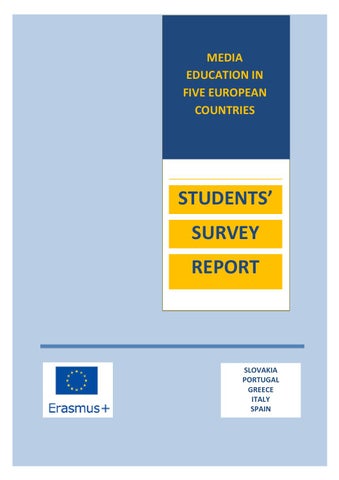 EXECUTIVE SUMMARY This report outlines the results of a survey on media education carried out as a joint work within the Erasmus plus project K2: “Media Education: From passive consumers to active creators” (2014-2016). Media education usage in secondary schools is still limited and its importance in identity formation is somehow left behind, although its great potential has been widely recognised and young people are highly exposed to different media forms due to the rapid pace of technology development. Besides, the dissemination of Information and Communication Technologies (ICTs) and their extensive use on behalf of young people cannot contribute to any development as long as they lack critical thinking skills, which should definitely be developed at school. Within this project the coordinators of five schools from different European countries, Slovakia, Portugal, Greece, Italy and Spain, conducted a student-centred survey about young people’s interest, usage and understanding of different types of media in their free time and studies. This survey, along with a teacher-centred one regarding teachers’ perceptions of Media Education at schools, its necessity and ways of teaching will provide the researchers with the information needed for the form and content of teaching materials and teaching plans for a hands-on approach of teaching Media Education, which will be designed jointly by the teachers of the schools involved in the project.

INTRODUCTION This report summarises the responses made by participants from 5 schools in the following European countries: Slovakia, Portugal, Greece, Italy and Spain. The aim of this student-centred survey is to gather information about secondary school students’ trends and about their usage and understanding of different types of media, either in

their free time or in the classroom, as well as to discover their attitudes towards and their perception of what takes place in their classroom as far as Media Education is concerned. The results will be of help to gain a better understanding of what we should focus on and to reveal valuable insights on the content of the teaching material to be produced.

DATA COLLECTION PROCESS SAMPLE This survey collected data from (upper) secondary school students in our organisations. We are more interested in the characteristics of the student community at large to make lesson plans for all. A total of 500 high school students ranging from 15 to 20 years old, 100 from each country, responded to the survey. METHOD AND DATA COLLECTION Descriptive survey research design was used mainly due to its quantitative nature. Moreover, it enabled us to better define our studentsâ&#x20AC;&#x2122; opinions, attitudes and behaviours on the subject matter. The data collection took place in March 2015 using the electronic collection method. The results were analysed using the percentage distribution and graphs. QUESTIONNAIRE DESIGN A 14-item questionnaire was edited as a co-product of the project coordinators with questions properly designed to bring us closer to our goal, being adjusted to the respondents and estimating the amount of time the survey would take a student to complete. The appropriate questionnaire design was effort demanding and time consuming since it had to fulfil the collaborative aspect in order to cover the parameters and status of the schools involved and to help lower the measurement error that might arise owed to the respondents or the survey mode itself. The questions are closed-ended or rating/point scale ones, thus allowing us to create data that is easily quantifiable and focused on the respondentsâ&#x20AC;&#x2122; preferences and attitudes toward media both in their personal and school life. Students completed the questionnaires voluntarily after receiving written and/or oral information about the research. Responding to the online questionnaire was submitted anonymously. The questionnaires were completed electronically using an online tool offered by SurveyMonkey that helped us gather survey-related information. It was chosen for being a simple tool which allows the entire data collection in a significantly short period. Moreover, survey settings allowed us to customize who could access our survey, which was set to allow

multiple responses per computer, so that willing to participate the surveyed students could make full use of the schools’ computer labs. The questionnaire applied to the students is available at: http://www.europeanmediaeducationlab.com/surveys.html The questionnaire included 14 items divided into three main parts: The first part (quest. 1-2) consisted of student background information: gender and age. The second part (quest. 3-9) was about students’ use of media in their studies and in their free time. The third part consisted of five items (quest. 10-14) meant to measure students’ interest and thoughts about Media Education at school.

SURVEY QUALITY MEASURES This survey used a student self-report questionnaire to measure the participants’ trends and habits in media usage. This method was selected for two main reasons. First, it made possible the comparison of students’ experiences while coming from five different European countries. Second, this method allows for the measurement of what is applied to adolescents’ real life as opposed to what is supposed to be taught at schools. Any might-be limitations rely on the honesty of the participants but this seems to be minimized since the questions do not refer to any confidential, personal or sensitive matters. Any response or measurement error might occur from the participants providing incorrect data due to their unwillingness to provide the information or from any skipped questions.

3. The highest percentage (64.2%) show their interest in Culture (films, music, literature, art), sports and fashion followed by science/technology (35.8%) and healthy living, while finance affairs and politics are of far less importance. Amazingly, they show the least interest in advertising, rating only 11.2% in their preferences.

4. By far the largest number (347) of those surveyed stated they rely on the internet most for keeping up with their media topic interests, ranking it as number 1 according to the frequency

of usage, being TV their second option. The radio and press apparently take the last position in their preferences.

5. The majority of them (37.8%) use the media mostly for communication or entertaining purposes (20.2%). A low percentage rank getting information purposes and killing time as their number 1. Surprisingly, only 6% of the students state that they most often use media to share their work (photos/ videos); in fact 40% rank it as the least often used.

7. Over one third of those surveyed indicated TV, films, video, social networks and video games as their favourite media forms and show the least interest in newspapers, podcasts and participating in forums.

8. An average of 32.8 % of the students use media to express themselves and their opinion in a creative way sometimes, while the Greek students declare their preference in doing so very often.

9. A large proportion (32.4%) of students surveyed consider discussing and sharing their opinion and work using social media important, with the Italian and Greek students showing a significant variation stating it is slightly important and very important respectively.

not at all important

MEDIA EDUCATION AT SCHOOL 10. An average of 41.8% of the students are of the opinion that it is important to have Media Education in their school curriculum, with the Greek students highlighting it as a matter of high importance. Only 4.6% consider it is of no importance.

Importance of Media Education in the school curriculum Not important

11. 57.2 % of the participants are not offered stand-alone Media Education lessons as a part of the curriculum at school, with the Slovakian, Portuguese and Greek students reaching on average the amount of about 80%. It is remarkable that about 60.6% of the Spanish students answered positively.

Media Education offered at school (stand-alone part of the curriculum) 39.4%

12. The majority of Portuguese, Italian and Spanish students state that their teachers incorporate Media Education into their lessons while the Slovakian and mostly the Greek students outpoint their negative answers.

Do teachers incorporate Media Education in their lessons? 25.8% 21.5%

I DO NOT KNOW

13. One third of the students surveyed expressed high interest in being taught how to understand hidden messages in media and how to make their voice heard effectively during Media Education lessons, while on the contrary the same proportion of students rank poorly (as no. 3) the importance of different media forms productions.

14. Seven in ten students would prefer to produce videos and six in ten of them photography during Media Education lessons, with animated and short films following at a comparable rate. The production of documentaries and bulletins/leaflets remains at the bottom of their preferences.

On the whole, the survey clearly shows that across the schools surveyed students demonstrate their preference in the internet as a favourable media to keep up with mostly for communicating and entertaining purposes, absolutely ignoring the press. As far as the topics are concerned, they show a great deal of interest in culture, sports and healthy living rather than finance and politics or even advertising. It is not surprising that they mostly make use of interactive media forms bringing video games, films, TV and chat on top as the most favourite ones. Meanwhile it is worth considering the fact that they set forums aside as the least interesting to participate in, although the majority considers discussing and sharing their opinion and work using social media important. Besides, media is seen as a means to express themselves and their opinion in a creative way some or most of the time. By far the largest number of those surveyed responded positively to the importance of integrating Media Education into their school curriculum since the majority stated they are not offered stand-alone Media Education lessons, but occasionally incorporated Media Education into other subjects.

The survey findings provide evidence that the students show high interest in learning about decoding messages and being capable of voicing their opinion in an effective way. When it comes to the production capability, they obviously declare their interest in video, photography, animated and short film creations. RECOMMENDATIONS The results of this students’ survey should be seriously taken into account on behalf of the project participating educators in designing their lesson plans with content mostly beneficial for the organisations involved, as well as for other potential interested users. The data indicate the lines of action as follows: 1. Students do highlight the importance of integrating media education into their school curriculum whether it is a stand-alone course or embedded in other courses by enthusiastic educators. Consequently, educators are recommended to ensure their professional development on Media Education, whether it is offered by policy makers or as a part of their updating on their own in order to be able to meet their students’ needs effectively. 2. The lesson plans should mostly be designed: a) With a focus on the respondents’ concerns as pointed out:  They generally consider media as a means to express themselves and their opinion in a creative way.  They make use of interactive media forms such as video games and chat.  They use social media to discuss and share their opinions.  They prefer the internet to keep up with, mostly for communication and entertainment, as well as films and TV.  They show a great deal of interest in culture, sports and healthy living. b) Related to the aims of Media Education:  to teach both analysis and production;  to educate for critical awareness;  to enable students to understand media reality. 3. Their tendency to underestimate and ignore finance and politics should be seriously taken into further consideration. It is suggested that young people should be more frequently exposed to and become familiar with relevant content of these areas in order to increase their social and political awareness, thus helping them become empowered as strong and active individuals in democratic societies. “MEDIA EDUCATION: FROM PASSIVE CONSUMERS TO ACTIVE CREATORS” - Erasmus plus project 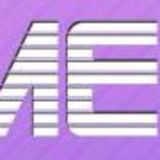