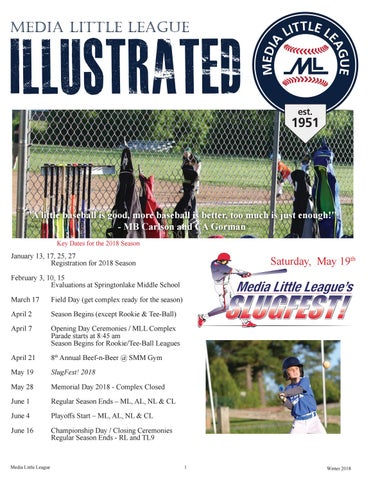 "A little baseball is good, more baseball is better, too much is just enough!" - MB Carlson and CA Gorman Key Dates for the 2018 Season

Field Day (get complex ready for the season)

A Message from the President The Media Little League Board of Directors and I are pleased to welcome you to another season of Little League baseball. Every spring the youth of our community are oﬀered the opportunity to play the game, learn the values of teamwork, make friends and most importantly to have fun. The 2018 Season will mark Media Little League’s 67th year of bringing the great game of baseball to our youth. We would not be able to do this year in and year out without the dedicated volunteers, who provide their time and energy to make it all happen. From the Board of Directors, our Snack Bar volunteers, our coaches, our team parents and Slugfest Coordinators, and to all who pitch in to lend a hand setting up and tearing down ﬁelds before and after games, there are hundreds of you who help to make Media Little League a success each season. However, as families graduate from Media Little League and new families join us, we can always use more help. I would encourage all of you to get involved. Whatever your talent or skills, you can help to make the 2018 Season fun and enjoyable for our youth. Each year Media Little League allocates funds to make improvements to our complex. As we head into the 2018 Season, we will have added additional bleachers to our National and American League ﬁelds, added concrete ﬂoors to our National and Major League dugouts, trimmed trees throughout the complex and are developing plans to install dugouts on the Continental League ﬁeld. We are aﬀorded the opportunity each year to make improvements at the complex because of the generous support we receive from all of you during our two major fundraising events, the Beef and Beer, and Slugfest. We appreciate your generous support of both of these events. I would like to congratulate all of our 2017 Season Champions, Runners-up, post-season District and tournament teams. Their successes would not be possible without the hard work and dedication of the players, coaches and parents. I hope that the memories made in 2017 will be ones that you will remember and cherish for years to come. Lastly, I would like to wish you all a happy and memorable 2018 Season. To all of our returning families, we welcome you back, and I look forward to seeing old friends. To our new families, I would like to extend to you a heartfelt welcome to Media Little League. I truly believe that Media Little League is one of the premier youth sports organizations in our area, because of all the people that dedicate their time and energy to making the game of baseball a great experience for all the children who participate. I hope that when the 2018 Season is done, you all will agree. Best Regards, Brett Lester MLL President

NEW Bat Regulations for the 2018 Season Starting with the 2018 season, ALL bats must meet the new USA Baseball Bat standards as outlined below. All Media Little League levels are eﬀected. Speciﬁcally, from Little League.org: • All BPF - Non 1.15 bats will be prohibited beginning with the 2018 season. Additionally, starting in 2018, the bat diameter shall not exceed 2-5/8 inches for these (Little League (Majors) and below) divisions of play. • All bats must have the USA Baseball logo signifying that the bat meets the new standards. • Minor/Major Divisions: It shall not be more than 33 inches in length; nor more than 2-5/8 inches in diameter, and if wood, not less than ﬁfteen-sixteenths (15/16) inches in diameter (7/8 inch for bats less than 30”) at its smallest part. Wood bats taped or ﬁtted with a sleeve may not exceed sixteen (16) inches from the small end. NOTE: Solid one-piece wood barrel bats do not require a USA Baseball logo. • Approved bat list can be found here: USABat If you have any questions, just ask one of our Board Members at Registration! Media Little League

Stump the Ump By Ed Laut Did you know that each year Media Little League holds a FREE UMPIRE CLINIC? The Clinic is for aspiring Umpires, Coaches who want to reﬁne their knowledge, or parents who want to just learn more about the responsibilities of the Umpire. Keep your eyes out for this year’s clinic! Until then, let’s see if you have what it takes to Stump the Ump on the following rules. Question 1: In a Little League baseball game, the bases are loaded with two outs. The runner on second leaves the base before the pitched ball reaches the batter and the umpire signals. The batter hits the ball into the gap and all the runners score before the batter-runner is thrown out at third base for the third out of the inning. How Many Runs are allowed to have scored? Question 2: The catcher in trying to catch a foul pop ﬂy, has the ball go down between his chest protector and his uniform shirt. The catcher acquires possession of the ball before it can hit the ground and shows it to the umpire. The umpire calls the batter out. Is this Right or Wrong?

Answer 1: None, Zero – When one runner leaves early it jeopardizes all the runners, so normally after all action has ceased, the umpire will call time and return all the runners to as close to their original bases as possible. Since the batter-runner was thrown out at third base, leaving the bases empty, all the runners should have be returned to their time of pitch base. Since the out at third base was the third out of the inning, the teams will switch sides and no runs will be recorded. Rule 7.13 (b) Exception; Rule 7.13 Note 2. Answer 2: Wrong – As soon as the pop ﬂy went down between the chest protector and the uniform shirt it became a trapped ball and was dead at that point and cannot be secured for an out. It is just a foul ball. Rule 2.00 – Catch.

It's All About the Gear... MLL Fan Gear! We accept credit cards, check, or cash

Lasting Family Memories of Media Little League When my career started at Media Little League, I had no idea that those years would be the foundation behind the success that I have achieved in the game of Baseball. I also had no idea that after playing the greatest game on earth for over 15 years, when my career came to an end, that I would still cherish the memories that I made while playing at MLL. The leadership skills, work ethic, and knowledge that I developed during my little league years gave me a head start as I grew as a person and as a player. Coach Snow, Coach Kotcamp, Coach Antonello and Coach Mohollen helped reinforce the mentality my Dad instilled in myself and my brothers at home while I was at the ﬁeld. As I look back, this season will make it ten years ago that I was fortunate enough to be a member of the 12-year-old District 19 Championship team. It was that District 19 Title Game where my future high school coach ﬁrst saw me play and my dream of playing baseball Iong past my little league years became a reality. I went on to become an All-Catholic, All-Delco, and All-City member of the Monsignor Bonner Friars. I was then blessed with the opportunity to be a four-year member of the University of Pittsburgh Panther baseball team where I am now a proud alumni. Baseball was always something more than a game to me and I cannot thank all of my former coaches and teammates at Media Little League enough for preparing me to not only succeed as an athlete but as a total person. There is truly no better place for your son or daughter to learn the fundamentals of the game. Dan Furman Proud MLL Alumni and Member of the 2008 District 19 Championship Team

“You’re playing a game, whether it’s Little League or Game 7 of the World Series. It’s impossible to do well unless you’re having a good time. People talk about pressure. Yeah, there’s pressure. But I just look at it as fun.” – Derek Jeter

Lasting Family Memories of Media Little League (continued) I am honored to forever be remembered as a member of the 2008 Media Little League State Championship team. My time at Media Little League is highlighted by the endless memories and friendships that I gained while playing the game I loved at MLL. Spanning four years, my teammates and I were able to bring home four District 19 titles, four Section 8 titles, and most importantly, a Pennsylvania State title in 2008. Ending up in Franklin Township, roughly an eight-hour trip from small-town Media, us boys were on the brink of doing something special. Going through three rounds of play without a loss, every team had a target on Media Little League as the team to beat. Coached well and prepared even better, we did not see that as a hardship. Going into a tournament as a favorite and leaving as a champion is no easy task, but we had a special group of guys that would not be denied. Our group of ten guys were able to complete an undefeated season and win the State Championship, something I will never forget. A great team and even better kids, we truly had something special. As I progressed in my baseball career, it was evident that Media Little League installs a sense of competitiveness and passion that few leagues can replicate. The year 2008, with the help of Media Little League, was one that shaped my childhood in an extremely positive way.

Stephen Furman Member of the 2008 9/10 yr. old PA State Championship Team The summer of 2008 was certainly a memorable one for Media Little League. I had the honor of coaching 10 hardworking, dedicated players on the 9/10-year-old district team. At the same time Coach Mohollen was ﬁnding success with the 11-year-old team and Coaches Snow, Kotcamp & Antonello were at the helm of a talented 12 year old team. Media Little League was at its peak of District 19 success and an unprecedented talent level in program history. The 12’s won the 2008 District 19 title with a convincing 10 run victory over Drexel Hill Little League. The 10’s also won the District in 10 run fashion over Aston-Middletown. The 10’s would continue their undefeated season through Section 8, Eastern Pa. title and ﬁnally Media Little League’s ﬁrst Pa. State Championship. As their coach, I will never forget how that group of 9 and 10 year olds dominated their way through the State. After an unforgettable summer, we returned home from Franklin Township, Pa (close to Erie) only to enjoy an unforgettable fall with our Phillies winning the World Series. Just 10 short years ago, but that was the Good old days at Media Little League! Tom Furman Coach of 2008 9/10 yr. old PA State Championship Team Media Little League

We Welcome our newest board members

...and we Thank each of our retiring board members!