Batteries in Space: A Transition to Smart Energy Solutions with Batteries 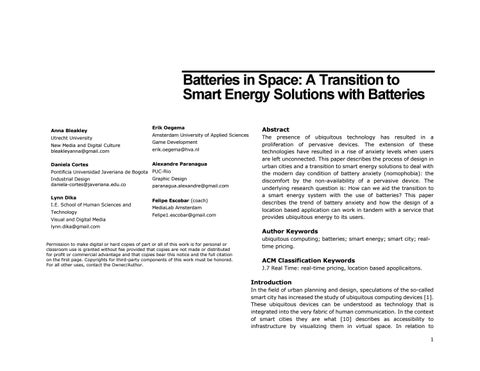 Permission to make digital or hard copies of part or all of this work is for personal or classroom use is granted without fee provided that copies are not made or distributed for profit or commercial advantage and that copies bear this notice and the full citation on the first page. Copyrights for third-party components of this work must be honored. For all other uses, contact the Owner/Author.

Abstract The presence of ubiquitous technology has resulted in a proliferation of pervasive devices. The extension of these technologies have resulted in a rise of anxiety levels when users are left unconnected. This paper describes the process of design in urban cities and a transition to smart energy solutions to deal with the modern day condition of battery anxiety (nomophobia): the discomfort by the non-availability of a pervasive device. The underlying research question is: How can we aid the transition to a smart energy system with the use of batteries? This paper describes the trend of battery anxiety and how the design of a location based application can work in tandem with a service that provides ubiquitous energy to its users.

Introduction In the field of urban planning and design, speculations of the so-called smart city has increased the study of ubiquitous computing devices [1]. These ubiquitous devices can be understood as technology that is integrated into the very fabric of human communication. In the context of smart cities they are what [10] describes as accessibility to infrastructure by visualizing them in virtual space. In relation to 1

devices, they are portable on-the-go 3G phones, tablets, and laptops [3]. Due to the introduction to these devices and flexible lifestyles, production centers, workplaces, and capital resources are now creating a re-articulation of urban spaces by redefining the spaces that determine the routes to end locations. As users become more engaged with pervasive technologies, sets of multidimensional components, such as broadband connectivity, digital inclusion, and marketing and advocacy are becoming necessary to transition conventional services to smarter services that add infrastructure and make a space more integral to its inhabitants [10]. The increased need of individuals to stay connected in these spaces of transition suggests the need for the creation of a sustainable city that uses ICTs to mitigate inconvenience with services such as smart energy, smart transportation, and smart mobility [10]. As digital society advances, ICT services and spaces have become integrated in a hybrid reality that can be experienced through ubiquitous devices that are location-based. Pervasiveness through ubiquitous computing is now being experienced as individuals are no longer tethered to the four walls that restrict energy flows and possibilities of connectivity. As this dependence increases, as seen by the growing trends in the increasing numbers of mobile integrated lifestyles that generate anxiety, a relationship is being built with battery life through the smart phone. Therefore, the battery should be examined as a means to which smart energy systems can offer 100% sustainable energy through conservation, efficiency, or storage and conversation techniques [7]. In this project, our aim was to create a service that could act as a starting point for ubiquitous sustainable energy, by tackling the problem of battery anxiety through batteries that are charged with Eneco’s real-time pricing application. The application calculates prices for electricity based on the APX, the Dutch energy stock market, which takes into account peak hours for green energy production. The aim for our service was to store excessive green energy on power banks to take advantage of excessive production of energy that cannot be stored.

This paper will draw from literature in the fields of urban planning and ubiquitous computing to describe the phenomena of smart cities and how the battery can become a stepping stone for sustainable smart energy solutions.

Eneco-on-the-go will act a case study to examine a service solution for excessive green energy on the energy grid in peak hours.

Relevant Literature The current rise of battery anxiety amongst users can be seen as a signifier of the importance of pervasive devices in their lives. The condition is classified as a causal pathway to the dependence of ubiquitous devices and is categorized by the feeling of anxiety or discomfort to the unavailability of a smartphone [5]. As spaces and technology change, habits and the relation of individuals to energy change with it. Today, most people are reported to use mobile phones on-the-go [10]. Users therefore become reliant on virtual environments to facilitate social engagement through their ubiquitous devices. [5] reports that individuals have their smart phones switched on 24 hours every day in their observations of smart phone users in a laboratory setting. As users develop an attachment to ubiquitous devices the experience of moving through spaces of transition are renewed. Access to virtual engagement becomes a possibility within spaces of transience, this is termed as space of flows by Castells, which allows for simultaneity of social spaces without territorial contiguity [1]. Looking at smart cities there are various definitions which emphasize the merge of these spaces with pervasive devices. Greenwich terms a smart city to be the increasing extent to which urban spaces are composed of ‘everyware’; that is pervasive and ubiquitous computing and digitally instrumented devices [4]. Previous studies on smart energy solutions are confined to studies on smart thermostats in homes, and spaces that do not facilitate transience [7, 2]. As communication is defined by virtual means, cities and the services that support infrastructures of connectivity need to support users in urban spaces. To understanding the changing landscape of urban planning, a smart energy initiative needs to accompany the mentioned transition.

Examining the Relationship with the Battery Creating an on-the-go project that correlates with current trends in energy as well as the unpredictable future of batteries has proved to be full of challenges. The premise of the project was to envision energy 2

in a manner closer to consumers and un-commodify energy: rebrand it as a tangible product. To examine energy closer to the user, the starting point was semi-structured interviews, which provided insights to the relationship with ‘the battery’ rather than the sockets that conventionally defined energy usage. In these interviews, users were asked about their charging habits. In the results, we found that most smart phone users were aware of the battery life that powered their devices. In the interviews users reported that they would take additional measures, such as buying a power bank to charge their devices, however they often forgot their power bank and would end up looking for chargers and sockets in institutional spaces (18 out of 20 users identified with battery anxiety situations). In the online social media platform Twitter, tweeters also expressed a relationship with the percentage of battery on their smartphones. After an analysis of the content of Tweets, it was found that an average of 96 tweets mentioned the keywords battery + anxiety to express anxious behavior relating to the battery power on devices. This anxiety was expressed in relation to the low battery life in screen shots made by other users in addition to their own feeling of anxiety with their devices.

Eneco On-The-Go (OTG) The service, OTG was born out of research that targets flexible workers that suffered from battery anxiety. The main pain was the battery life of their devices that would be drained due to their pervasive lifestyles. The OTG service utilizes Eneco’s real-time pricing features in order to charge batteries efficiently in the hours where energy is produced in mass amounts. In figure 1, an explanation of the service components can be found.

Figure 1 The customer journey for the Eneco on-the-go service. This figure maps out the emotional journey of OTG users.

Additionally, the OTG service, uses user interfaces that are designed to navigate users with a responsive interactive map that projects the city’s landscape. As users move through spaces of transience they are met with a responsive interface that guides them to the next source of energy. The use of notifications of low battery levels were created to ensure that the user stays conscious of the their battery level to avoid anxious situations.

The Dream of Mobility The OTG project presents empirical discussion on the relationship of ubiquitous computing in spaces of transience. As people become more anxious and emotionally driven to stay connected with others through their smart phones, designs of smart energy solutions need to move toward ubiquity. The formations of cities are going through a transitioning phase that need to find solutions to the fluctuations of energy and utilize data to provide user catered solutions for electricity usage. The attachment to the smart phone surfaces the relationship with energy we have â&amp;#x20AC;&amp;#x201C; one in which virtual communication has become dependent on the battery.

Figure 2 The user application for Eneco on-the-go. The figure displays the different notification options for different levels of battery.

Usability On-the-Go: Catering to Ubiquitous Energy Trend To integrate sustainability into the project and move closer to a smart energy solution at hand, infrastructure that produces big data was introduced to the real-time pricing feature, which would enable energy conservation through batteries during the peak hours of green energy production. Because sustainable energy is produced in fluctuating amounts due to weather conditions, such as solar or wind â&amp;#x20AC;&amp;#x201C; energy cannot be controlled. Furthermore, fluctuating prices on the APX (the energy stock market) differ per the hour. This makes it difficult to organize human behavior in response to such forces. The real-time pricing features changes the syntax of energy consumption by charging

The introduction of the battery as a facilitator of a smart conservation system of green energy provides a starting point to understand spatial trends and the transformation of relationships with hardware. The literature and findings in this paper suggests that an on-the-go battery service could act as a smart solution for an abundance of green energy production. Furthermore, the user studies in the project display the need for services to support ubiquitous devices because of the increased dependence on the battery. The use of the OTG service to charge batteries during peak energy hours can be seen as a means to transition to a new energy conservation method with batteries.

Further Research As the world moves toward sustainable energy solutions a new relationship with energy that is untethered by four walls needs to be considered to facilitate the needs of on-the-go individuals. Additionally, research in the field of smart phone dependence should also dive into the relationships with batteries in additional to current research on the integration of mobile phones in our lives. A smart ethnography should be conducted to collect the practices of current smart phone users in relation to battery conservation. 4

Acknowledgements We would like to thank all the MediaLab teams of Winter 2016 and Eneco for the feedback and guidance during various stages of our project.

Batteries in Space: A Transition to Smart Energy Solutions with Batteries

The presence of ubiquitous technology has resulted in a proliferation of pervasive devices. The extension of these technologies have resulted in a rise of anxiety levels when users are left unconnected. This paper describes the process of design in urban cities and a transition to smart energy solutions to deal with the modern day condition of battery anxiety (nomophobia): the discomfort by the non-availability of a pervasive device. The underlying research question is: How can we aid the transition to a smart energy system with the use of batteries? This paper describes the trend of battery anxiety and how the design of a location based application can work in tandem with a service that provides ubiquitous energy to its users. 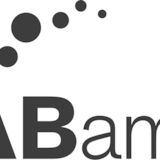