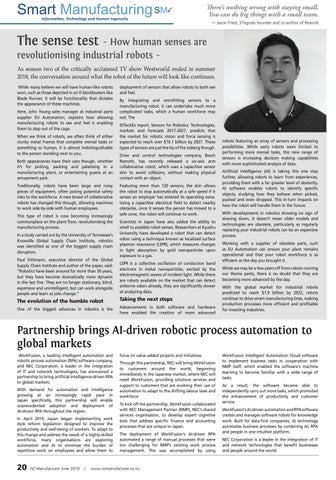 There’s nothing wrong with staying small. You can do big things with a small team. — Jason Fried, 37signals founder and co-author of Rework

The sense test ~ How human senses are revolutionising industrial robots ~ As season two of the critically acclaimed TV show Westworld ended in summer 2018, the conversation around what the robot of the future will look like continues. While many believe we will have human-like robots soon, such as those depicted in sci-fi blockbusters like Blade Runner, it will be functionality that dictates the appearance of these machines. Here, John Young sales manager at industrial parts supplier EU Automation, explains how allowing manufacturing robots to see and feel is enabling them to step out of the cage. When we think of robots, we often think of either clunky metal frames that complete menial tasks or something so human, it is almost indistinguishable to the person standing next to you. Both appearances have their uses though, whether it’s for picking, packing and palatising in a manufacturing plant, or entertaining guests at an amusement park. Traditionally, robots have been large and noisy pieces of equipment, often posing potential safety risks to the workforce. A new breed of collaborative robots has changed this though, allowing machines to work side-by-side with human employees. This type of robot is now becoming increasingly commonplace on the plant floor, revolutionising the manufacturing process. In a study carried out by the University of Tennessee’s Knoxville Global Supply Chain Institute, robotics was identified as one of the biggest supply chain disruptors. Paul Dittmann, executive director of the Global Supply Chain Institute and author of the paper, said: “Robotics have been around for more than 50 years, but they have become dramatically more dynamic in the last five. They are no longer stationary, blind, expensive and unintelligent, but can work alongside people and learn as jobs change.”

deployment of sensors that allow robots to both see and feel. By integrating and retrofitting sensors to a manufacturing robot, it can undertake much more complicated tasks, which a human workforce may not. The IDTechEx report, Sensors for Robotics: Technologies, markets and forecasts 2017-2027, predicts that the market for robotic vision and force sensing is expected to reach over $16.1 billion by 2027. These types of sensors are just the tip of the iceberg though. Drive and control technologies Rexroth, has recently released collaborative robot, which uses a skin to avoid collisions, without contact with an object.

Featuring more than 120 sensors, the skin allows the robot to stop automatically at a safe speed if it senses an employer has entered its operating zone. Using a capacitive electrical field to detect nearby obstacles, once it senses the person has moved to a safe zone, the robot will continue to work. Scientists in Japan have also added the ability to smell to possible robot senses. Researchers at Kyushu University have developed a robot that can detect odors using a technique known as localized surface plasmon resonance (LSPR), which measures changes in light absorption by gold nanoparticles upon exposure to a gas. LSPR is a collective oscillation of conduction band electrons in metal nanoparticles, excited by the electromagnetic waves of incident light. While there are robots available on the market that can detect airborne odors already, they are significantly slower at analyzing data.

The evolution of the humble robot

Taking the next steps

One of the biggest advances in robotics is the

robots featuring an array of sensors and processing possibilities. While early robots were limited to performing more menial tasks, this new range of sensors is increasing decision making capabilities with more sophisticated analysis of data. Artificial intelligence (AI) is taking this one step further, allowing robots to learn from experiences, providing them with a far greater level of dexterity. AI software enables robots to identify specific objects, studying how they behave when picked, pushed and even dropped. This in-turn impacts on how the robot will handle them in the future. With developments in robotics showing no sign of slowing down, it doesn’t mean older models and technologies are obsolete, particularly as regularly replacing your industrial robots can be an expensive process. Working with a supplier of obsolete parts, such as EU Automation can ensure your plant remains operational and that your robot workforce is as efficient as the day you brought it. While we may be a few years off from robots running our theme parks, there is no doubt that they are becoming more advanced by the day. With the global market for industrial robots predicted to reach $1.9 billion by 2022, robots continue to drive smart manufacturing lines, making production processes more efficient and profitable for investing industries.

Partnership brings AI-driven robotic process automation to global markets WorkFusion, a leading intelligent automation and robotic process automation (RPA) software company, and NEC Corporation, a leader in the integration of IT and network technologies, has announced a partnership to bring artificial intelligence-driven RPA to global markets. With demand for automation and intelligence growing at an increasingly rapid pace in Japan specifically, this partnership will enable unprecedented adoption and deployment of AI-driven RPA throughout the region. In April 2019, Japan began implementing work style reform legislation designed to improve the productivity and well-being of workers. To adapt to this change and address the needs of a highly-skilled workforce, many organisations are exploring automation and AI to minimise the burden of repetitive work on employees and allow them to

focus on value-added projects and initiatives. Through this partnership, NEC will bring WorkFusion to customers around the world, beginning immediately in the Japanese market, where NEC will resell WorkFusion, providing solutions services and support to customers that are evolving their use of automation to adapt to the shifting labour laws and workforce. To kick off the partnership, WorkFusion collaborated with NEC Management Partner (NMP), NEC’s shared services organisation, to develop expert cognitive bots that address specific finance and accounting processes that are unique to Japan. The deployment of WorkFusion’s AI-driven RPA automated a range of manual processes that were too challenging for NMP’s existing work process management. This was accomplished by using

WorkFusion Intelligent Automation Cloud software to implement business tasks in cooperation with NMP staff, which enabled the software’s machine learning to become familiar with a wide range of tasks. As a result, the software became able to independently carry out more tasks, which promoted the enhancement of productivity and customer service. WorkFusion’s AI-driven automation and RPA software creates and manages software robots for knowledge work. Built for data-first companies, its technology automates business processes by combining AI, RPA and people in one intuitive platform. NEC Corporation is a leader in the integration of IT and network technologies that benefit businesses and people around the world.