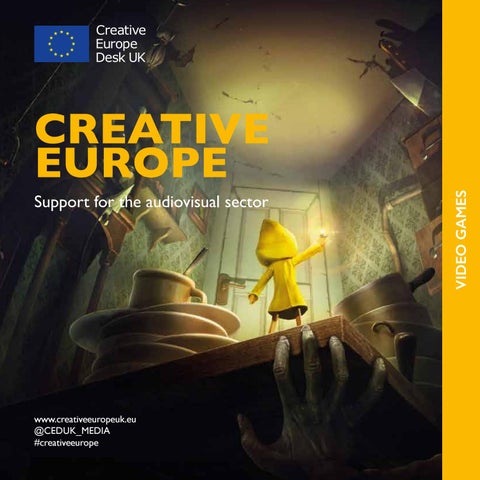 Support for the audiovisual sector

INTRODUCTION Creative Europe’s MEDIA sub-programme is the European Union’s support programme for the film, television and digital media industries. With a budget of €1.46 billion, it runs from 2014-2020 and aims to improve the quality of European content and help European films, programmes and projects perform better internationally. In this publication we highlight how Creative Europe supports video game developers by: • providing funding for the development of narrative video game prototypes • co-funding training courses and networking events which directly target the audiovisual community.

DEVELOPMENT: VIDEO GAMES WHAT DOES THIS FUNDING SUPPORT?

HOW MUCH CAN YOU APPLY FOR?

European video game developers with proven experience who want to develop innovative, narrative video games (from concept to the first version of a playable prototype), regardless of platform or expected distribution method, which are intended for commercial exploitation.

The non-repayable grant awarded to each project can range from €10,000 to €150,000 and can cover up to 50% of the eligible budget. The grant must be matched by other sources of funding or through the company’s own investment.

WHO IS THIS FUNDING FOR? Applicant companies must: • • •

be established in one of the countries participating in the MEDIA sub-programme and be majority owned by nationals from those countries be registered for a minimum of 12 months and have video game development as their main business activity (SIC Code: 62011 Ready-made interactive leisure and entertainment software development) own the majority of the IP rights to the project for which support is being sought.

Applicant companies must also be able to demonstrate that they have developed/produced one previous video game. To be eligible, this game must: • •

be credited to the applicant company (personal credits or any work contracted/sub-contracted by another company cannot be considered) have been commercially distributed (demonstrated by a relevant sales report showing revenues generated) within the last two calendar years.

HOW CAN THE GRANT BE SPENT? Only activities relating to the early development phase (from initial idea, to production of the first playable prototype or trial version) of the video game are eligible. The grant can be used in four main areas during this phase: • • • •

The costs within the proposed budget are eligible from the date of submission of the application. WHEN SHOULD YOU APPLY? There should be at least 8 months between the date that you submit the application and the date that you enter into the ‘production’ phase of the game. This phase includes the testing and debugging of your playable prototype. If you have already created/released a playable prototype of the video game, it is too late to apply.

DEVELOPMENT: VIDEO GAMES WHAT TYPES OF GAMES ARE ELIGIBLE FOR SUPPORT?

WHAT TYPES OF GAMES ARE NOT ELIGIBLE FOR SUPPORT?

Only narrative video games that feature in-game storytelling are eligible (both for the track record project and the project for which support is being sought). The story must be told or shown throughout the whole game (in-game storytelling) and not only as an introduction or an ending to the game.

The following projects are ineligible:

Developed by Image & Form in Sweden, SteamWorld Heist was supported by Creative Europe in 2014. The game has been released on PC, Mac, Linux, PS4, PS Vita, Nintendo 3DS, Wii U and iOS. Image © Image & Form

THE BIENNALE COLLEGE - HYBRID: a training programme to help creative professionals navigate VR and the aesthetic and narrative opportunities it offers. The workshops encourages participants to explore both the creative, financial and technical elements of their projects as well as the potential engagement with audiences.

FILMTERACTIVE: a meeting place where filmmakers, interactive directors, artists, marketers, game creators and potential investors can network and exchange their professional know-how. The core of the event is a marketplace for innovative audiovisual content gathering the authors of the projects and the potential distributors and content buyers representing European media, brands and venture capital funds.

VR ACCELERATOR EUROPE: a “train the talents” initiative for writers, developers and creative producers that looks at the technical, psychological and narrative tools needed to write, develop, shoot and create rapid prototypes of VR projects.

French developers Small Bang pitch their project Ulysses at the 2016 edition of Cartoon 360, a Creative Europe-funded initiative for cross-media projects held in in Barcelona. © CARTOON

PROMISED LAND: a training course run by Poland’s CD Projekt that brings together artists working in film, gaming, and the advertising industries. The course aims to blur the boundary between digital and traditional art and is aimed at both experienced professionals as well as enthusiasts wishing to take their skills to the next level.

VR/AR CONTENTS MARKET: a European market dedicated to the production of content for virtual and/or augmented reality across the fields of film, TV, transmedia and gaming. The event aims at encouraging smaller audiovisual companies to produce high-quality content and supporting access to both technology and finance.

For more information and to find the right initiative for you, visit: www.creative-europe-media.eu You can also sign up to our MEDIA sub-programme newsletter and follow us on Facebook and Twitter for up-to-date information and deadline reminders for these funded projects.

GET IN TOUCH Creative Europe Desk UK offers free advice and support to UK applicants and organises a range of workshops, seminars and industry events throughout the year. Visit our website to browse funding opportunities, be inspired by funded projects and keep up-to-date with the latest deadlines via our e-newsletter.

Participants networking at an event organised by Creative Europe Desk UK at the ICA in 2016. Photo by Linda Nylind.

The European Commission support for the production of this publication does not constitute an endorsement of the content which reflects the views only of the authors and the Commission cannot be held responsible for any use which may be made of the information contained therein.

In partnership with Arts Council England, Creative Scotland and Welsh Government. With support from the UK Department for Culture, Media and Sport and the European Commission. 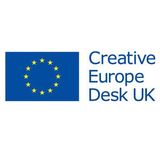