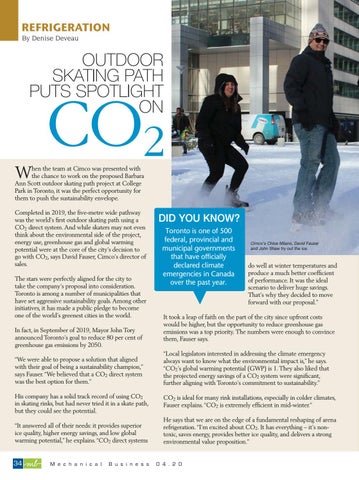 hen the team at Cimco was presented with the chance to work on the proposed Barbara Ann Scott outdoor skating path project at College Park in Toronto, it was the perfect opportunity for them to push the sustainability envelope.

Completed in 2019, the ﬁve-metre wide pathway was the world’s ﬁrst outdoor skating path using a CO2 direct system. And while skaters may not even think about the environmental side of the project, energy use, greenhouse gas and global warming potential were at the core of the city’s decision to go with CO2, says David Fauser, Cimco’s director of sales. The stars were perfectly aligned for the city to take the company’s proposal into consideration. Toronto is among a number of municipalities that have set aggressive sustainability goals. Among other initiatives, it has made a public pledge to become one of the world’s greenest cities in the world. In fact, in September of 2019, Mayor John Tory announced Toronto’s goal to reduce 80 per cent of greenhouse gas emissions by 2050.

DID YOU KNOW? Toronto is one of 500 federal, provincial and municipal governments that have ofﬁcially declared climate emergencies in Canada over the past year.

do well at winter temperatures and produce a much better coefﬁcient of performance. It was the ideal scenario to deliver huge savings. That’s why they decided to move forward with our proposal.”

It took a leap of faith on the part of the city since upfront costs would be higher, but the opportunity to reduce greenhouse gas emissions was a top priority. The numbers were enough to convince them, Fauser says.

“We were able to propose a solution that aligned with their goal of being a sustainability champion,” says Fauser. “We believed that a CO2 direct system was the best option for them.”

“Local legislators interested in addressing the climate emergency always want to know what the environmental impact is,” he says. “CO2’s global warming potential (GWP) is 1. They also liked that the projected energy savings of a CO2 system were signiﬁcant, further aligning with Toronto’s commitment to sustainability.”

His company has a solid track record of using CO2 in skating rinks, but had never tried it in a skate path, but they could see the potential.

CO2 is ideal for many rink installations, especially in colder climates, Fauser explains. “CO2 is extremely efﬁcient in mid-winter.”

He says that we are on the edge of a fundamental reshaping of arena refrigeration. “I’m excited about CO2. It has everything – it’s nontoxic, saves energy, provides better ice quality, and delivers a strong environmental value proposition.” 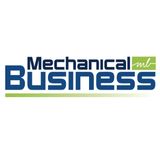