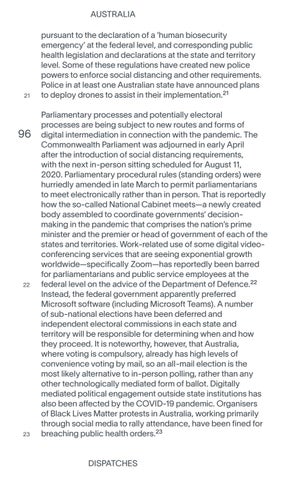 pursuant to the declaration of a ‘human biosecurity emergency’ at the federal level, and corresponding public health legislation and declarations at the state and territory level. Some of these regulations have created new police powers to enforce social distancing and other requirements. Police in at least one Australian state have announced plans to deploy drones to assist in their implementation.21 Parliamentary processes and potentially electoral processes are being subject to new routes and forms of digital intermediation in connection with the pandemic. The Commonwealth Parliament was adjourned in early April after the introduction of social distancing requirements, with the next in-person sitting scheduled for August 11, 2020. Parliamentary procedural rules (standing orders) were hurriedly amended in late March to permit parliamentarians to meet electronically rather than in person. That is reportedly how the so-called National Cabinet meets—a newly created body assembled to coordinate governments’ decisionmaking in the pandemic that comprises the nation’s prime minister and the premier or head of government of each of the states and territories. Work-related use of some digital videoconferencing services that are seeing exponential growth worldwide—specifically Zoom—has reportedly been barred for parliamentarians and public service employees at the federal level on the advice of the Department of Defence.22 Instead, the federal government apparently preferred Microsoft software (including Microsoft Teams). A number of sub-national elections have been deferred and independent electoral commissions in each state and territory will be responsible for determining when and how they proceed. It is noteworthy, however, that Australia, where voting is compulsory, already has high levels of convenience voting by mail, so an all-mail election is the most likely alternative to in-person polling, rather than any other technologically mediated form of ballot. Digitally mediated political engagement outside state institutions has also been affected by the COVID-19 pandemic. Organisers of Black Lives Matter protests in Australia, working primarily through social media to rally attendance, have been fined for breaching public health orders.23 DISPATCHES