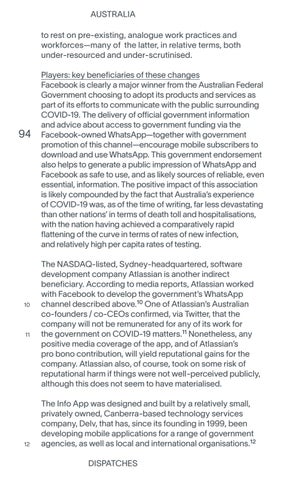 AUSTRALIA to rest on pre-existing, analogue work practices and workforces—many of the latter, in relative terms, both under-resourced and under-scrutinised.

Players: key beneficiaries of these changes Facebook is clearly a major winner from the Australian Federal Government choosing to adopt its products and services as part of its efforts to communicate with the public surrounding COVID-19. The delivery of official government information and advice about access to government funding via the Facebook-owned WhatsApp—together with government promotion of this channel—encourage mobile subscribers to download and use WhatsApp. This government endorsement also helps to generate a public impression of WhatsApp and Facebook as safe to use, and as likely sources of reliable, even essential, information. The positive impact of this association is likely compounded by the fact that Australia’s experience of COVID-19 was, as of the time of writing, far less devastating than other nations’ in terms of death toll and hospitalisations, with the nation having achieved a comparatively rapid flattening of the curve in terms of rates of new infection, and relatively high per capita rates of testing. The NASDAQ-listed, Sydney-headquartered, software development company Atlassian is another indirect beneficiary. According to media reports, Atlassian worked with Facebook to develop the government’s WhatsApp channel described above.10 One of Atlassian’s Australian co-founders / co-CEOs confirmed, via Twitter, that the company will not be remunerated for any of its work for the government on COVID-19 matters.11 Nonetheless, any positive media coverage of the app, and of Atlassian’s pro bono contribution, will yield reputational gains for the company. Atlassian also, of course, took on some risk of reputational harm if things were not well-perceived publicly, although this does not seem to have materialised. The Info App was designed and built by a relatively small, privately owned, Canberra-based technology services company, Delv, that has, since its founding in 1999, been developing mobile applications for a range of government agencies, as well as local and international organisations.12 DISPATCHES

The COVID-19 pandemic has reshaped how social, economic, and political power is created, exerted, and extended through technology. Through case studies from around the world, this book analyses the ways in which technologies of monitoring infections, information, and behaviour have been applied and justified during the emergency, what their side-effects have been, and what kinds of resistance they have met. 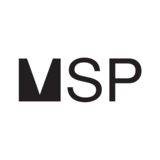