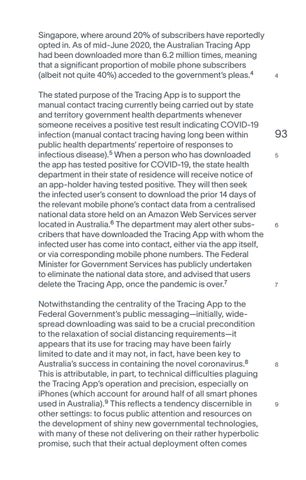 Singapore, where around 20% of subscribers have reportedly opted in. As of mid-June 2020, the Australian Tracing App had been downloaded more than 6.2 million times, meaning that a significant proportion of mobile phone subscribers (albeit not quite 40%) acceded to the government’s pleas.4 The stated purpose of the Tracing App is to support the manual contact tracing currently being carried out by state and territory government health departments whenever someone receives a positive test result indicating COVID-19 infection (manual contact tracing having long been within public health departments’ repertoire of responses to infectious disease).5 When a person who has downloaded the app has tested positive for COVID-19, the state health department in their state of residence will receive notice of an app-holder having tested positive. They will then seek the infected user’s consent to download the prior 14 days of the relevant mobile phone’s contact data from a centralised national data store held on an Amazon Web Services server located in Australia.6 The department may alert other subscribers that have downloaded the Tracing App with whom the infected user has come into contact, either via the app itself, or via corresponding mobile phone numbers. The Federal Minister for Government Services has publicly undertaken to eliminate the national data store, and advised that users delete the Tracing App, once the pandemic is over.7 Notwithstanding the centrality of the Tracing App to the Federal Government’s public messaging—initially, widespread downloading was said to be a crucial precondition to the relaxation of social distancing requirements—it appears that its use for tracing may have been fairly limited to date and it may not, in fact, have been key to Australia’s success in containing the novel coronavirus.8 This is attributable, in part, to technical difficulties plaguing the Tracing App’s operation and precision, especially on iPhones (which account for around half of all smart phones used in Australia).9 This reflects a tendency discernible in other settings: to focus public attention and resources on the development of shiny new governmental technologies, with many of these not delivering on their rather hyperbolic promise, such that their actual deployment often comes