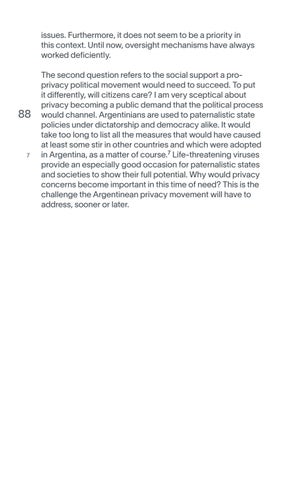 issues. Furthermore, it does not seem to be a priority in this context. Until now, oversight mechanisms have always worked deficiently.

The second question refers to the social support a proprivacy political movement would need to succeed. To put it differently, will citizens care? I am very sceptical about privacy becoming a public demand that the political process would channel. Argentinians are used to paternalistic state policies under dictatorship and democracy alike. It would take too long to list all the measures that would have caused at least some stir in other countries and which were adopted in Argentina, as a matter of course.7 Life-threatening viruses provide an especially good occasion for paternalistic states and societies to show their full potential. Why would privacy concerns become important in this time of need? This is the challenge the Argentinean privacy movement will have to address, sooner or later.