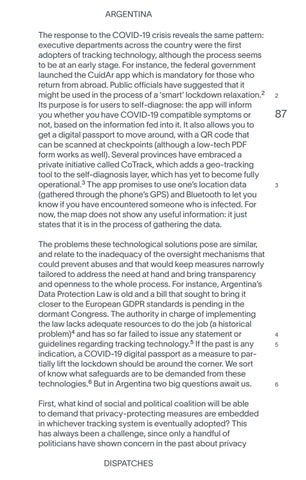 ARGENTINA The response to the COVID-19 crisis reveals the same pattern: executive departments across the country were the first adopters of tracking technology, although the process seems to be at an early stage. For instance, the federal government launched the CuidAr app which is mandatory for those who return from abroad. Public officials have suggested that it might be used in the process of a ‘smart’ lockdown relaxation.2 Its purpose is for users to self-diagnose: the app will inform you whether you have COVID-19 compatible symptoms or not, based on the information fed into it. It also allows you to get a digital passport to move around, with a QR code that can be scanned at checkpoints (although a low-tech PDF form works as well). Several provinces have embraced a private initiative called CoTrack, which adds a geo-tracking tool to the self-diagnosis layer, which has yet to become fully operational.3 The app promises to use one’s location data (gathered through the phone’s GPS) and Bluetooth to let you know if you have encountered someone who is infected. For now, the map does not show any useful information: it just states that it is in the process of gathering the data. The problems these technological solutions pose are similar, and relate to the inadequacy of the oversight mechanisms that could prevent abuses and that would keep measures narrowly tailored to address the need at hand and bring transparency and openness to the whole process. For instance, Argentina’s Data Protection Law is old and a bill that sought to bring it closer to the European GDPR standards is pending in the dormant Congress. The authority in charge of implementing the law lacks adequate resources to do the job (a historical problem)4 and has so far failed to issue any statement or guidelines regarding tracking technology.5 If the past is any indication, a COVID-19 digital passport as a measure to partially lift the lockdown should be around the corner. We sort of know what safeguards are to be demanded from these technologies.6 But in Argentina two big questions await us. First, what kind of social and political coalition will be able to demand that privacy-protecting measures are embedded in whichever tracking system is eventually adopted? This has always been a challenge, since only a handful of politicians have shown concern in the past about privacy DISPATCHES