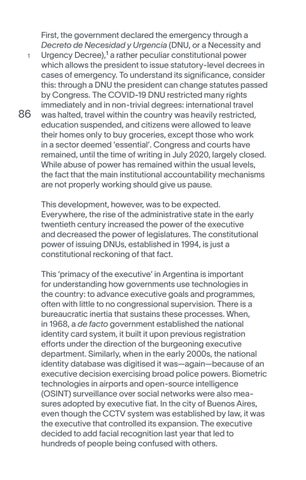 First, the government declared the emergency through a Decreto de Necesidad y Urgencia (DNU, or a Necessity and Urgency Decree),1 a rather peculiar constitutional power which allows the president to issue statutory-level decrees in cases of emergency. To understand its significance, consider this: through a DNU the president can change statutes passed by Congress. The COVID-19 DNU restricted many rights immediately and in non-trivial degrees: international travel was halted, travel within the country was heavily restricted, education suspended, and citizens were allowed to leave their homes only to buy groceries, except those who work in a sector deemed ‘essential’. Congress and courts have remained, until the time of writing in July 2020, largely closed. While abuse of power has remained within the usual levels, the fact that the main institutional accountability mechanisms are not properly working should give us pause. This development, however, was to be expected. Everywhere, the rise of the administrative state in the early twentieth century increased the power of the executive and decreased the power of legislatures. The constitutional power of issuing DNUs, established in 1994, is just a constitutional reckoning of that fact. This ‘primacy of the executive’ in Argentina is important for understanding how governments use technologies in the country: to advance executive goals and programmes, often with little to no congressional supervision. There is a bureaucratic inertia that sustains these processes. When, in 1968, a de facto government established the national identity card system, it built it upon previous registration efforts under the direction of the burgeoning executive department. Similarly, when in the early 2000s, the national identity database was digitised it was—again—because of an executive decision exercising broad police powers. Biometric technologies in airports and open-source intelligence (OSINT) surveillance over social networks were also measures adopted by executive fiat. In the city of Buenos Aires, even though the CCTV system was established by law, it was the executive that controlled its expansion. The executive decided to add facial recognition last year that led to hundreds of people being confused with others.