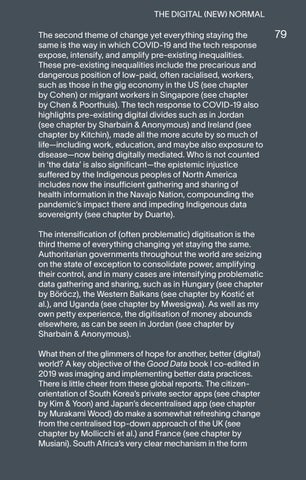 THE DIGITAL (NEW) NORMAL The second theme of change yet everything staying the same is the way in which COVID-19 and the tech response expose, intensify, and amplify pre-existing inequalities. These pre-existing inequalities include the precarious and dangerous position of low-paid, often racialised, workers, such as those in the gig economy in the US (see chapter by Cohen) or migrant workers in Singapore (see chapter by Chen & Poorthuis). The tech response to COVID-19 also highlights pre-existing digital divides such as in Jordan (see chapter by Sharbain & Anonymous) and Ireland (see chapter by Kitchin), made all the more acute by so much of life—including work, education, and maybe also exposure to disease—now being digitally mediated. Who is not counted in ‘the data’ is also significant—the epistemic injustice suffered by the Indigenous peoples of North America includes now the insufficient gathering and sharing of health information in the Navajo Nation, compounding the pandemic’s impact there and impeding Indigenous data sovereignty (see chapter by Duarte). The intensification of (often problematic) digitisation is the third theme of everything changing yet staying the same. Authoritarian governments throughout the world are seizing on the state of exception to consolidate power, amplifying their control, and in many cases are intensifying problematic data gathering and sharing, such as in Hungary (see chapter by Böröcz), the Western Balkans (see chapter by Kostić et al.), and Uganda (see chapter by Mwesigwa). As well as my own petty experience, the digitisation of money abounds elsewhere, as can be seen in Jordan (see chapter by Sharbain & Anonymous). What then of the glimmers of hope for another, better (digital) world? A key objective of the Good Data book I co-edited in 2019 was imaging and implementing better data practices. There is little cheer from these global reports. The citizenorientation of South Korea’s private sector apps (see chapter by Kim & Yoon) and Japan’s decentralised app (see chapter by Murakami Wood) do make a somewhat refreshing change from the centralised top-down approach of the UK (see chapter by Mollicchi et al.) and France (see chapter by Musiani). South Africa’s very clear mechanism in the form