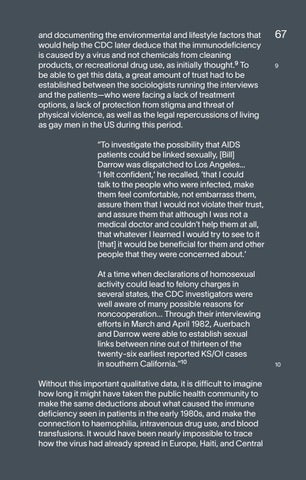 and documenting the environmental and lifestyle factors that would help the CDC later deduce that the immunodeficiency is caused by a virus and not chemicals from cleaning products, or recreational drug use, as initially thought.9 To be able to get this data, a great amount of trust had to be established between the sociologists running the interviews and the patients—who were facing a lack of treatment options, a lack of protection from stigma and threat of physical violence, as well as the legal repercussions of living as gay men in the US during this period.

“To investigate the possibility that AIDS patients could be linked sexually, [Bill] Darrow was dispatched to Los Angeles… ‘I felt confident,’ he recalled, ‘that I could talk to the people who were infected, make them feel comfortable, not embarrass them, assure them that I would not violate their trust, and assure them that although I was not a medical doctor and couldn’t help them at all, that whatever I learned I would try to see to it [that] it would be beneficial for them and other people that they were concerned about.’ At a time when declarations of homosexual activity could lead to felony charges in several states, the CDC investigators were well aware of many possible reasons for noncooperation... Through their interviewing efforts in March and April 1982, Auerbach and Darrow were able to establish sexual links between nine out of thirteen of the twenty-six earliest reported KS/OI cases in southern California.”10 Without this important qualitative data, it is difficult to imagine how long it might have taken the public health community to make the same deductions about what caused the immune deficiency seen in patients in the early 1980s, and make the connection to haemophilia, intravenous drug use, and blood transfusions. It would have been nearly impossible to trace how the virus had already spread in Europe, Haiti, and Central