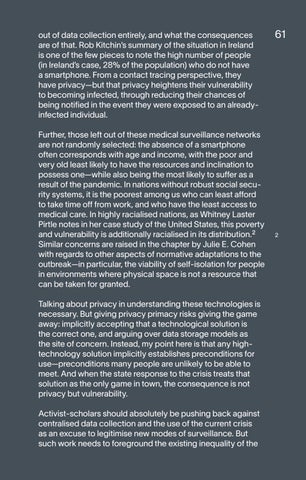 out of data collection entirely, and what the consequences are of that. Rob Kitchin’s summary of the situation in Ireland is one of the few pieces to note the high number of people (in Ireland’s case, 28% of the population) who do not have a smartphone. From a contact tracing perspective, they have privacy—but that privacy heightens their vulnerability to becoming infected, through reducing their chances of being notified in the event they were exposed to an alreadyinfected individual. Further, those left out of these medical surveillance networks are not randomly selected: the absence of a smartphone often corresponds with age and income, with the poor and very old least likely to have the resources and inclination to possess one—while also being the most likely to suffer as a result of the pandemic. In nations without robust social security systems, it is the poorest among us who can least afford to take time off from work, and who have the least access to medical care. In highly racialised nations, as Whitney Laster Pirtle notes in her case study of the United States, this poverty and vulnerability is additionally racialised in its distribution.2 Similar concerns are raised in the chapter by Julie E. Cohen with regards to other aspects of normative adaptations to the outbreak—in particular, the viability of self-isolation for people in environments where physical space is not a resource that can be taken for granted. Talking about privacy in understanding these technologies is necessary. But giving privacy primacy risks giving the game away: implicitly accepting that a technological solution is the correct one, and arguing over data storage models as the site of concern. Instead, my point here is that any hightechnology solution implicitly establishes preconditions for use—preconditions many people are unlikely to be able to meet. And when the state response to the crisis treats that solution as the only game in town, the consequence is not privacy but vulnerability. Activist-scholars should absolutely be pushing back against centralised data collection and the use of the current crisis as an excuse to legitimise new modes of surveillance. But such work needs to foreground the existing inequality of the